“Defending human rights is now seriously threatened in Belarus… The charge against Marfa Rabkova is tantamount to the criminalisation of human rights work.”

Since the 9 August 2020 presidential election in Belarus, tens of thousands of people who have taken to the streets in peaceful protests have been met with mass repression by the Belarusian authorities.

Human Rights House Foundation considers a political prisoner to be any person deprived of liberty for political motives or in violation their human rights, in particular the rights to freedoms of expression, assembly, association and the right to be a human rights defender. This definition is, in part, inspired by the criteria outlined by the Parliamentary Assembly of the Council of Europe.

Since the beginning of the on-going crisis, citizens, journalists and human rights defenders have been beaten, injured and hospitalized. According to Viasna, Belarus saw unprecedented repression in 2020 including:

In a report presented at the United Nations General Assembly in October, Anaïs Marin, the UN Special Rapporteur on the situation of human rights in Belarus called on the Belarusian authorities to “put an end to the judicial harassment of human rights defenders, journalists, bloggers and other members of civil society.” 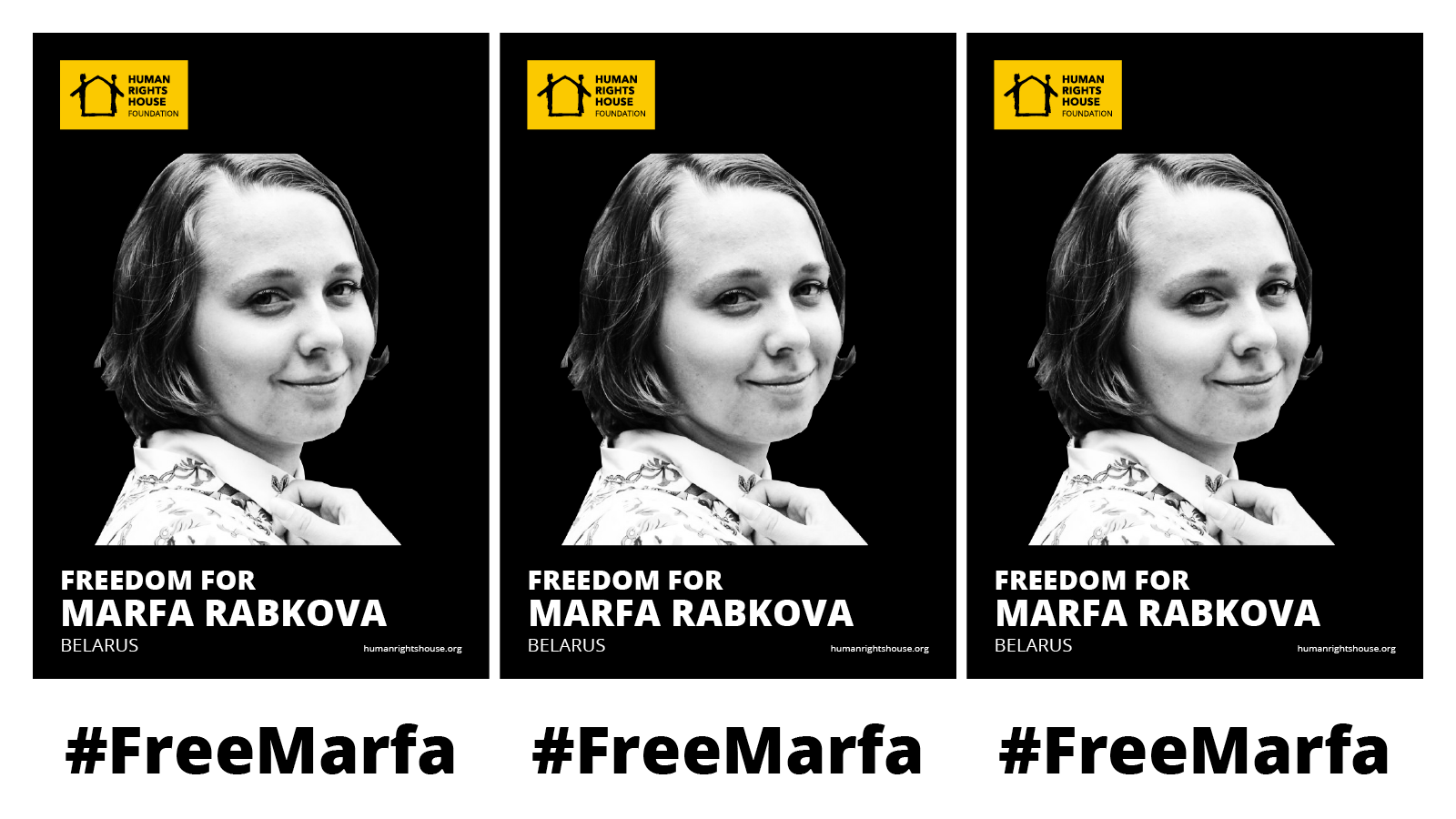 On 17 September 2020, Marfa Rabkova, a volunteer coordinator at the Human Rights Center Viasna was detained in Minsk and charged with “criminal pursuit”. Her prosecution is politically motivated and linked to her human rights activities.

On 20 June 2021, Marfa Rabkova’s detention was extended for a further three months. She faces up to 12 years in prison.

During the events surrounding and after the election period, Marfa has worked tirelessly for human rights, helping hundreds of repressed activists and their families, and making sure victims of torture had their voices heard. 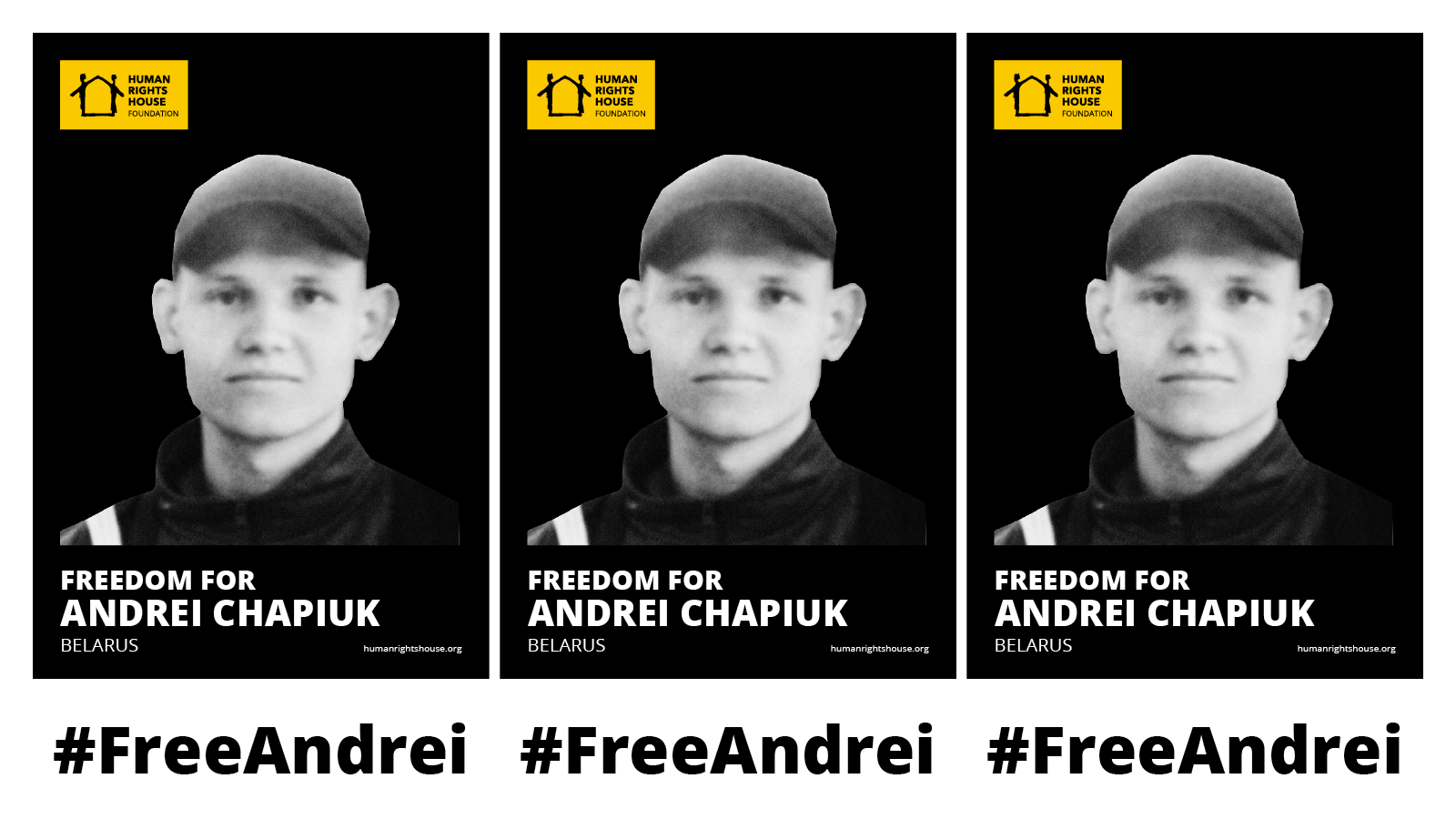 “We regard the persecution of Andrei Chapiuk in connection with his legitimate human rights activities as a continuation of the authorities’ campaign of intimidation and pressure on [Viasna] as a whole.“

On October 2, Andrei Chapiuk, a volunteer working with Viasna was detained in Minsk and his apartment was searched by law enforcement. On October 9, Andrei was charged with participation in riots and taken to a pre-trial detention center in Minsk. His persecution is due to his human rights activities. 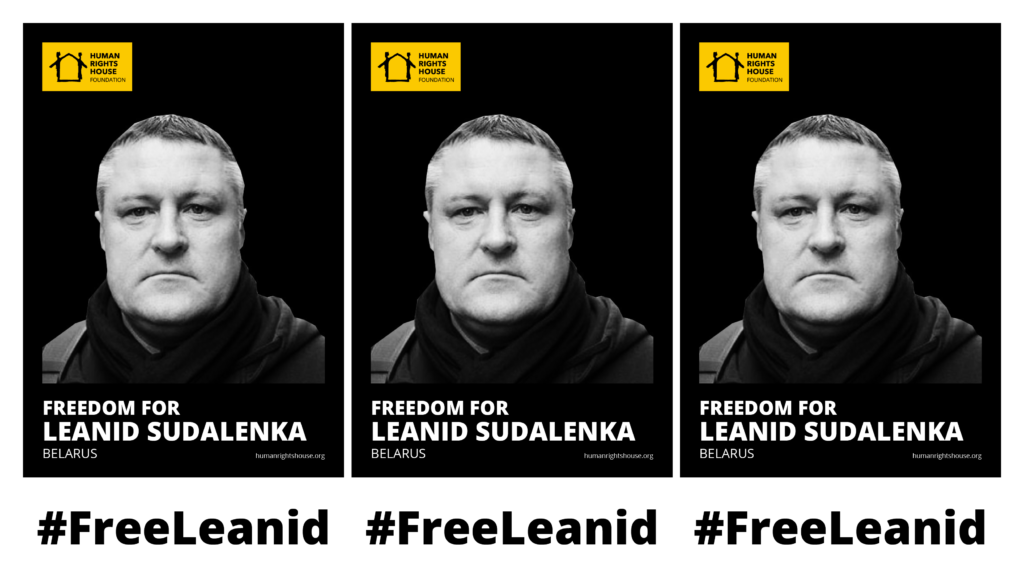 On January 5, the civil and political community centre where Viasna’s office is located was raided by the police. On January 18, police detained Leanid Sudalenka. He is currently a suspect in a criminal case under Art. 342 of the Criminal Code (organisation or active participation in group actions which gravely breach public order) and has been remanded in a detention centre. On the same evening, Sudalenka’s assistant and Viasna’s volunteer Maryia Tarasenka was detained and her house was also searched. Tarasenka was later released on 21 January. 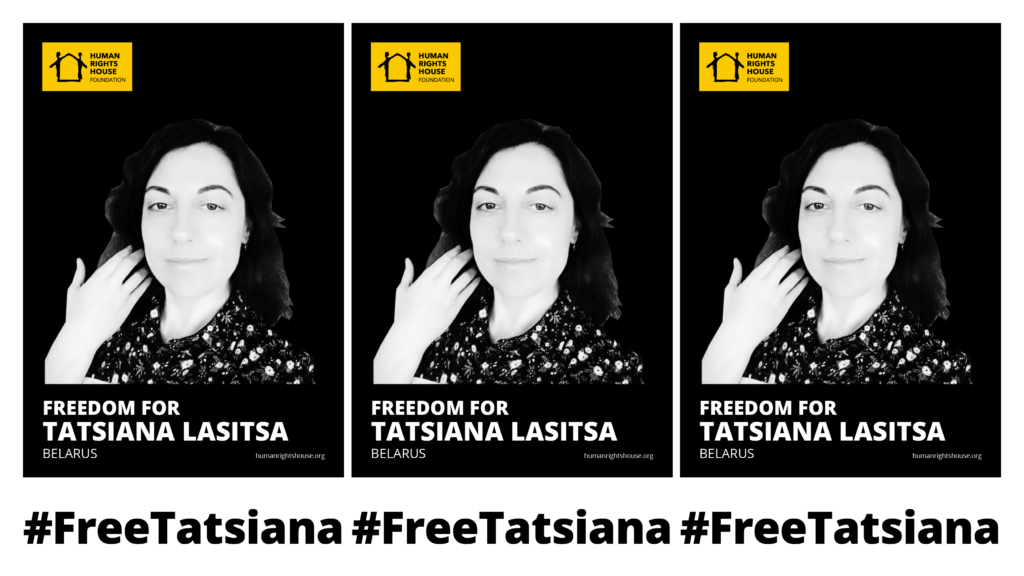 Tatsiana Lasitsa was detained on January 21 at the Minsk airport by officers of the Interior Ministry.

She is a suspect in a criminal case under Part 1 and Part 2 of Art. 342 of the Criminal Code (organisation or active participation in group actions that grossly violate public order). She was remanded in custody pending indictment. 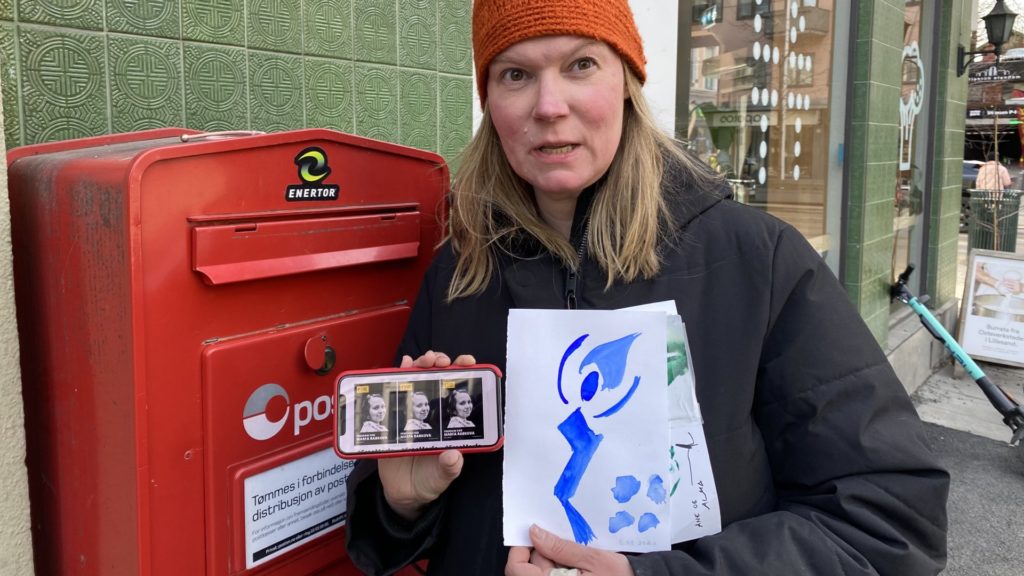 Viasna Human Rights Centre is keeping a comprehensive and regularly updated list of political prisoners as well as their mailing addresses. Show your support by sending letters of solidarity to Marfa Rabkova, Andrei Chapiuk, Leanid Sudalenka, Tatsiana Lasitsa, and all other political prisoners in Belarus.

Show your support online and offline

Show your support by sharing these posts and graphics. Take a selfie with the posters and use the hashtags! 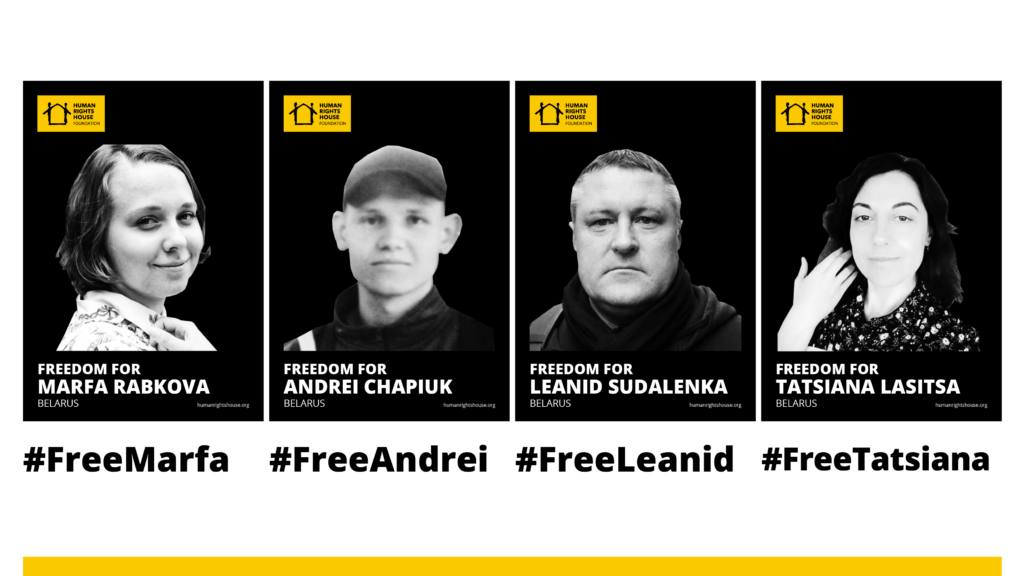 I join @hrhfoundation in calling on the Belarusian authorities to release Marfa Rabkova, Andrei Chapiuk, Leanid Sudalenka, Tatsiana Lasitsa, and all other political prisoners. #FreeBelarus Show your support! http://bit.ly/FreeBYhrds

We Stand With Belarus 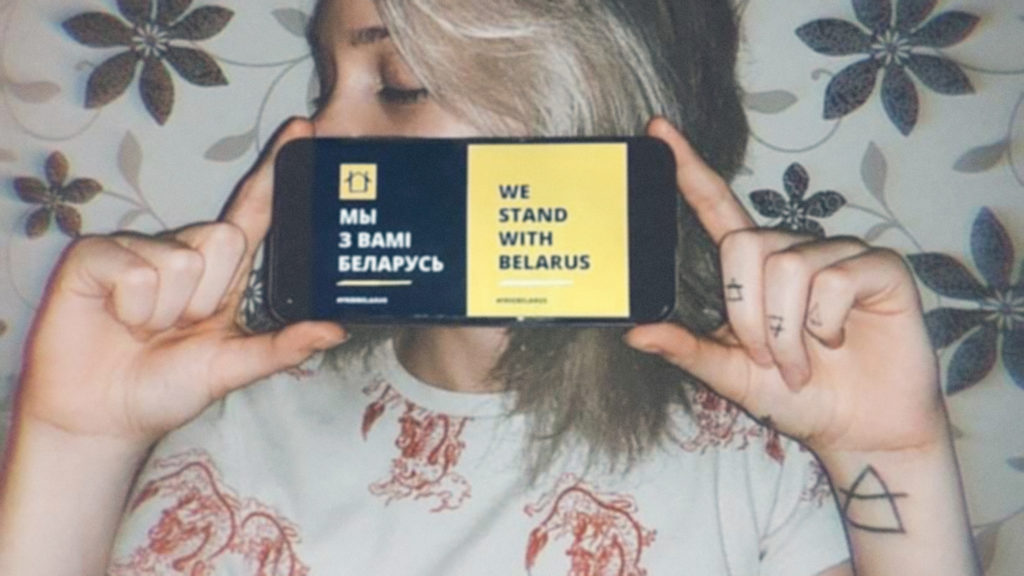 Download our “We Stand With Belarus” graphics pack to show your support for Belarusian civil society.