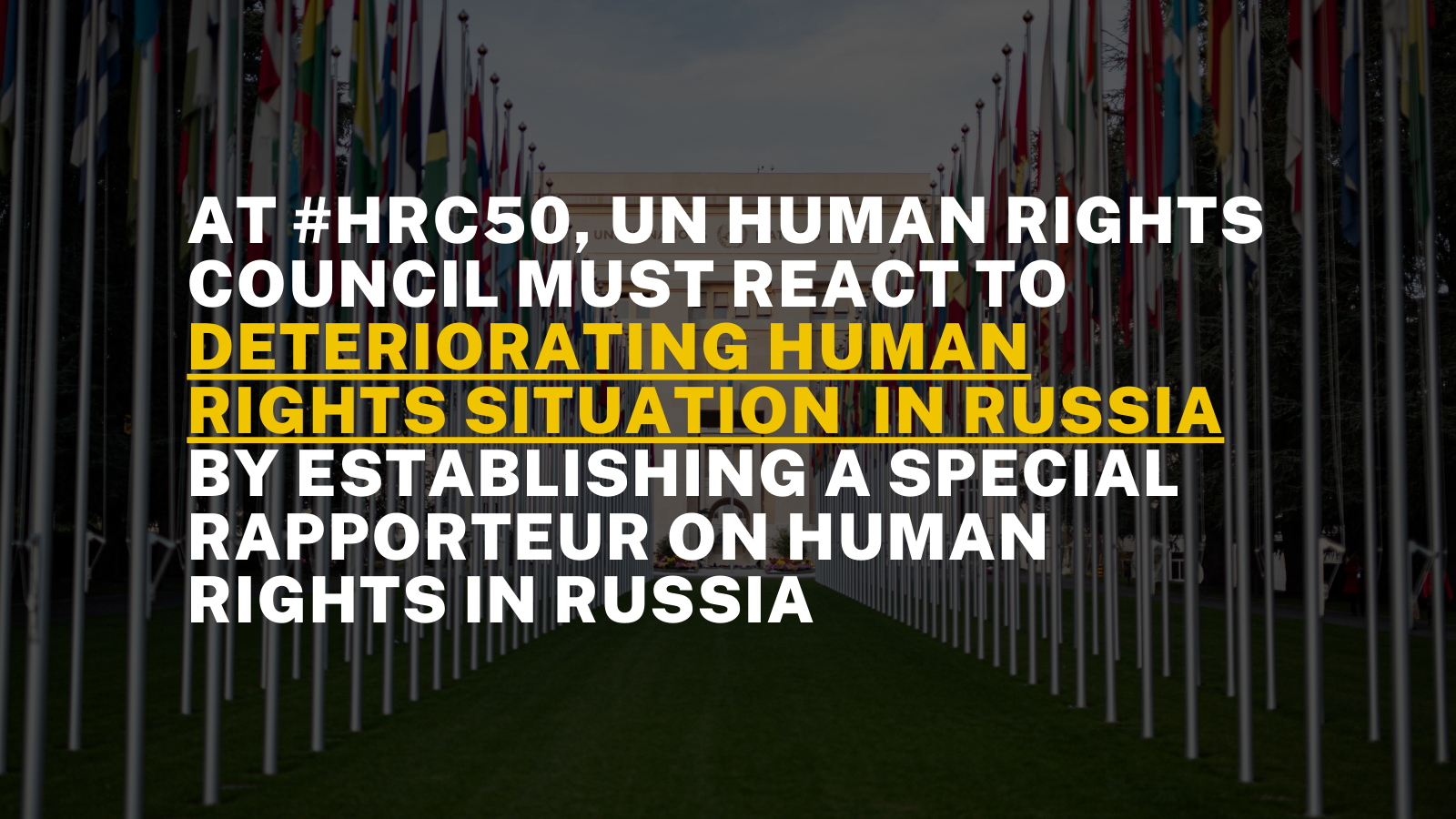 Human Rights House Foundation joins other international NGOs in calling on the EU to table a resolution at the upcoming 50th session of the UN Human Rights Council to mandate a Special Rapporteur on the human rights situation in Russia.

RE: Establish a Special Rapporteur on the situation of human rights in the Russian Federation at the UN Human Rights Council

We are writing to call on your government to stand with Russian human rights defenders, activists, and civil society organizations by calling on the European Union to propose a resolution at the upcoming 50th session of the UN Human Rights Council on the establishment of a strong monitoring and reporting mandate on the deteriorating human rights situation in Russia, in the form of a Special Rapporteur.

Over the last several years, the Russian authorities have engaged in a systematic campaign of repression of human rights and restriction of civic space including by shutting down independent media, intimidating and harassing human rights defenders and activists, banning peaceful protest, and imposing impermissible restrictions on the operations of independent civil society organizations in the country, including those that seek justice and effective remedies for human rights violations.

We welcome the joint statement on the situation in the Russian Federation delivered by 51 United Nations Member States on 9 March 2022. However, since then, Russian authorities have moved to make it nearly impossible for Russian and international human rights non-governmental organizations and civil society organizations to operate in Russia, in violation of the Russian Federation’s human rights obligations. In March, an appeals court upheld the liquidation of Russia’s leading human rights group, Memorial. In April, the Ministry of Justice cancelled the registrations of Amnesty International, Human Rights Watch, and offices of 13 other international non-governmental organizations and foundations.

Russian human rights defenders, activists, and civil society organizations expressing critical views or engaging in work that does not align with government agendas face increasing intimidation, harassment, discrimination and stigmatization. Among the government’s key tools against these individuals and organizations is the expansion of the punitive, toxic “foreign agent” designation. A new bill tabled in April would again drastically extend the application of the “foreign agents” label. Criminal trials in two cases of involvement with “undesirable” organizations are ongoing.

Since the adoption of the March 2022 censorship legislation criminalizing the spreading of supposed “fake news” and independent media reporting on Russia’s armed conflict with Ukraine, authorities blocked access to dozens of independent media and opened scores of criminal cases against human rights defenders, grass roots activists, prominent independent bloggers, journalists and opposition politicians, including Vladimir Kara-Murza, and over 1250 administrative cases throughout Russia. Bogus criminal cases against anti-war protesters are also being opened on various other charges, including criminal hooliganism. Over 15,000 anti-war protesters have been detained. The authorities have instrumentalized counter-extremism and counter-terrorism legislation to fabricate criminal cases against the dissenters.  Scores of people, including political opposition figure Alexei Navalny, remain behind bars on politically motivated grounds.

The Russian Federation’s growing repressive policies, combined with the country’s departure from the Council of Europe and its diplomatic isolation from those States which have been supportive of human rights and civil society in Russia, make it increasingly difficult for Russian human rights defenders, activists, and civil society organizations to engage with the international community and there is no end in sight. Without robust and genuine international support, and monitoring mechanism, independent Russian civil society organizations will continue to be left isolated and dangerously exposed.

While it is important that existing thematic Special Procedures continue to address the situation of the Russian Federation within the scope of their respective mandates, it is critical that there be a single expert that can tie the various strands together and address the situation in a holistic manner and who can more fully engage with Russian authorities, as well as with human rights defenders, activists, and civil society organizations.