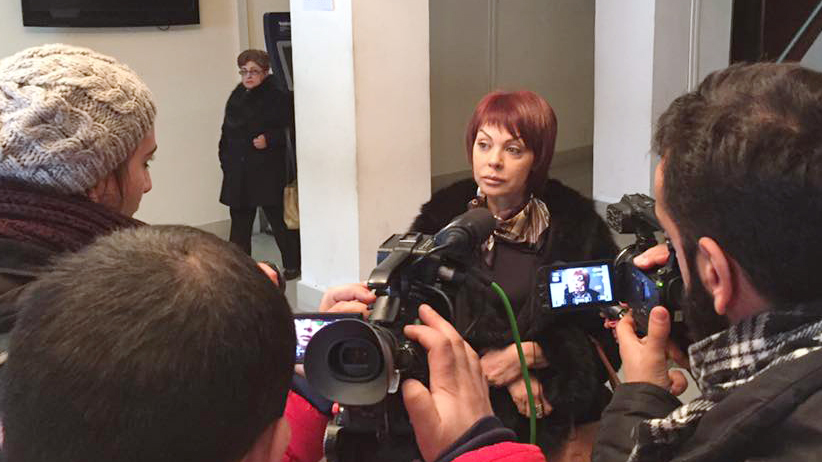 (Updated 8 March) Marina Poghosyan works against corruption in Armenia. She now faces charges of extortion. Human rights organisations have linked the trial to the work of the human rights defender’s organisation in uncovering illegal activities involving officials in the country.

Marina Poghosyan appeared this week before the Central Court of Yerevan. The hearing brought significant procedural developments and raised concerns as to whether she would receive a fair trial.

A trial observer from ARTICLE 42, member of Human Rights House Tbilisi, attended the hearing. He reported that Marina Poghosyan’s defence had asked for the prosecutor to be changed on grounds that he was biased in this case. This was rejected by the Court.

Marina Poghosyan is the director of Veles, an Armenian non-governmental organisation working against corruption, shadow economy, fraud, usury, and money-laundering, and victims of violations of the judicial system, providing them with free legal advice and representation.

Since beginning work in 2013, Veles has revealed cases of illegal and suspicious activities involving former and current Armenian officials.

Hovhannes Madoyan, Head of Human Rights House Yerevan, who attended the trial, later raised concerns about the impartiality of the judge, Mnatsakan Martirosyan, stating that he is known as “a true servant of the regime in carrying out political orders.”

While acknowledging that the judge strictly complies with procedural rules, he claimed that the judge’s verdicts can hardly be called fair and that he is known for convicting civil and opposition activists and protesters in high-profile cases.

As a suspect in a criminal case, Marina Poghosyan cannot leave the country and her bank account is arrested.

Significantly, the alleged victim of the criminal case also submitted a civil lawsuit against Marina Poghosyan during the hearing, asking for damages of USD 100,000 to be paid.

The trial observer reported that the defence requested more time to get acquainted with the civil lawsuit and to prepare for the questioning of the alleged victim. This was granted and the process was postponed to 15 March. Human Rights House Foundation will report from this next hearing.

The trial observer also revealed that around 15 people, including media and non-governmental organisations, were present in the court room.

“The case against Marina Poghosyan is emblematic of the way Armenia treats human rights defenders, and of the increasingly worrying situation in the country. Several examples in recent years of political figures issuing threats against and intimidating LGBT activists and women human rights defenders, illustrate that the authorities are not upholding their commitments to protect and promote human rights defenders, but on the contrary try to hinder people from standing up for human rights.” commented Ane Tusvik Bonde, Human Rights House Foundation’s(HRHF) Regional Manager, Eastern Europe and Caucasus.

Marina Poghosyan is the director of Veles, an Armenian non-governmental organisation working against corruption, shadow economy, fraud, usury, and money-laundering, and victims of violations of the judicial system, providing them with free legal advice and representation.

Among them is the Women’s Resource Centre which has, along with its leaders, been the subject of smear campaigns since 2013. In 2013, HRHF in cooperation with 50 civil society organisations issued a letter of concern condemning the smear campaigns and harassment against human rights organisations working on gender issues in Armenia and urged the authorities in to ensure the protection of human rights defenders in their work.

HRHY, along with several other human rights organisations and defenders have issued a statement in support of Marina Poghosyan calling for the authorities in Armenia to stop “the groundless criminal prosecutions” against her, further stating that prosecutions should not be used as “a tool to silence human rights defenders”.

The initiation of proceedings against her coincided with the start of a criminal case that Veles had worked on involving ex-prosecutor Suren Osipov’s son Victor Hovsepyan, in which other members of Osipov’s family, as well as other employees of the prosecutor’s office were implicated.

She was charged and attended the Arabkir district court on 19 January. Both Poghosyan and her supporters voiced concerns that employees of the legal institutions in the Arabkir district have personal relationships with two ex-officials connected to cases worked on by Veles.

The Judge ruled that the case would be transferred to the Central Court of Yerevan. No date was set for the next hearing.

A lawyer from Article 42 of the Constitution from the Human Rights House Tbilisi, observing the court hearings at the request of HRHF and HRHY, reported no obstruction or interference when entering the court and noted that several journalists and human rights defenders were in attendance.

Members of HRHY have commented that they see the transfer of the case to the Central Court of Yerevan as a small but positive development. They have also stated that they will continue to monitor the case closely.

This is not the first case of criminal proceedings to brought against Marina Poghosyan.

In 2014, following her work on two criminal cases involving Armenia’s ex-director of the Department of Civil Aviation, Hovhannes Pavel Yeritsyan, she was accused of fraud. The case was later requalified as extortion, alleging that she had tried to extort money from relatives of Hovhannes Pavel Yeritsan. Following 8 months of criminal proceedings, the case was dropped.

Armenia must stop the disproportionate use of force against protestors

Women’s Resource Center Armenia receives “With and For Girls Award”