The Uyghur American Association (UAA) fears that the near doubling of the security budget for East Turkestan will broaden the scope of the ongoing official repression of Uyghurs and exacerbate ethnic tensions in the region, UAA claims Beijing fails to acknowledge the deep social and developmental inequalities that contributed to the unrest in the regional capital of East Turkestan in July 2009.

Chinese government’s heightened reliance on brute force to stabilize East Turkestan will be counterproductive and only heighten discontent among Uyghurs, stated UAA, as quoted by ‘Uyghur Human Rights Project’.

“Chinese authorities know only how to crack down with an iron fist on the Uyghur people,” said Uyghur democracy leader Rebiya Kadeer. “They carry out executions, mass detentions, and “Strike Hard” campaigns in an effort to intimidate the Uyghur population into absolute silence.

Chinese officials also employ propaganda campaigns and mandatory political indoctrination in a bid to both demonize and control the Uyghur people. However, guns and propaganda will only worsen conditions in East Turkestan. Until the government stops violating the human rights of Uyghurs, loosens restrictions on Uyghurs’ religious and cultural identity, and enacts policies aimed at addressing economic, social, and educational inequalities prevalent in the region, lasting stability will never be achieved.” 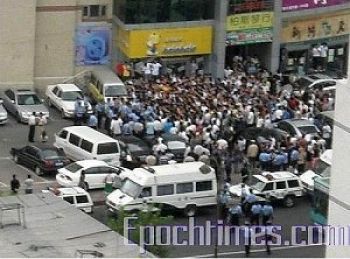 Official statements regarding the increase in funding for regional security were coupled with an ominous pledge from regional government chairman Nur Bekri to persist in a crackdown on Uyghur separatists and the three forces of “terrorism, separatism and extremism”. Chinese officials have consistently placed the blame for civil unrest on what they term a small minority of troublemakers rather than recognizing widespread discontent.

This statement underscores ongoing state control over Uyghurs’ religious practices, including the “patriotic education” required of all Uyghur imams and the monitoring of mosques in East Turkestan. Bekri’s remarks regarding the role of religious figures in preventing unrest also reinforce fears that Uyghurs’ observance of their Islamic faith will be even further restricted.

Bekri’s pledge comes in the wake of new regional regulations announced last week in state press reports that governments at all levels in East Turkestan would be required to enhance security checks on “suspicious persons” and monitor religious activities in the name of fighting terrorism. The rules, which will come into effect on February 1, also connect the promotion of government officials with their work to eliminate the “three forces.” 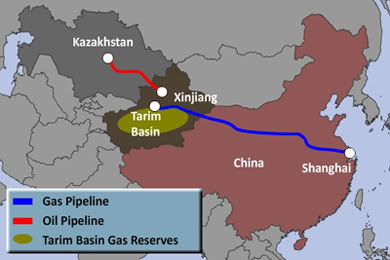 The sharp increase in security funding follows the December opening of a new gas pipeline stretching from Turkmenistan to East Turkestan, which is expected to meet more than half of China’s current requirement for natural gas and which is vital to the enormous energy appetite fueled by rapid industrial growth on China’s eastern seaboard.

Long nervous over the prospect of regional instability in East Turkestan as they sought to exploit East Turkestan’s abundance of natural resources, central and regional authorities appear to be particularly jittery about what they believe could be prospective risks to the massive pipeline project.

Government officials fear not only the possibility of a direct attack on the pipeline, but also any assertions that Uyghurs deserve a greater share of the employment opportunities and profits afforded by regional resource exploitation, which have almost exclusively benefited Han Chinese.

In the wake of the unrest that rocked the regional capital of Urumchi in July of last year, Chinese authorities have implemented a multi-faceted crackdown on the Uyghur people. More than 130,000 troops were reportedly deployed to East Turkestan from other regions of the People´s Republic of China.

Twenty-two people, the vast majority Uyghurs, have been sentenced to death in regional courts following politicized trials, and state media reported in November that nine of these individuals had been executed.

Mass arrests and detentions of Uyghurs have been carried out through security sweeps and targeted raids. Authorities launched a “100-day campaign in September 2009 to capture “suspects” in connection with the July 2009 events, and a “Strike Hard” campaign two months later to continue detentions of people deemed suspects in the July unrest. 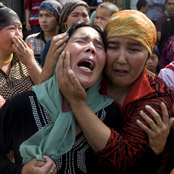 Cut off from the world
UAA believes the near absence of strong international condemnation of continuing state brutality in East Turkestan since July 5 has only emboldened the actions of Chinese officials. UAA calls on the international community to follow the lead of UN minorities expert Gay McDougall, who requested in December 2009 that the Chinese government allow a comprehensive and independent assessment of the ethnic tensions and grievances that led to the unrest in Urumchi.

East Turkestan remains largely cut off from the rest of the world through state-imposed phone and Internet restrictions, more than six months after July 5. International telephone communication has been continuously blocked or heavily restricted, cutting off almost all communication between Uyghurs in East Turkestan and their family and friends living abroad. Some Uyghurs living abroad were previously able to contact relatives in East Turkestan by first calling a friend or relative in eastern the People´s Republic of China who then connected their call to East Turkestan, but this method of communication has now been cut off by Chinese authorities. The transmission of cell phone text messages has also reportedly been limited to messages from Communist Party authorities to residents of East Turkestan.

Authorities have recently opened up access to a small number of official news websites to Internet users in East Turkestan, but blocks on e-mail, Internet discussion forums and other methods of online social communication remain in place in the region. Meanwhile, bloggers have reported that Uyghurs are restricted from Internet access in Internet cafés throughout the People´s Republic of China.