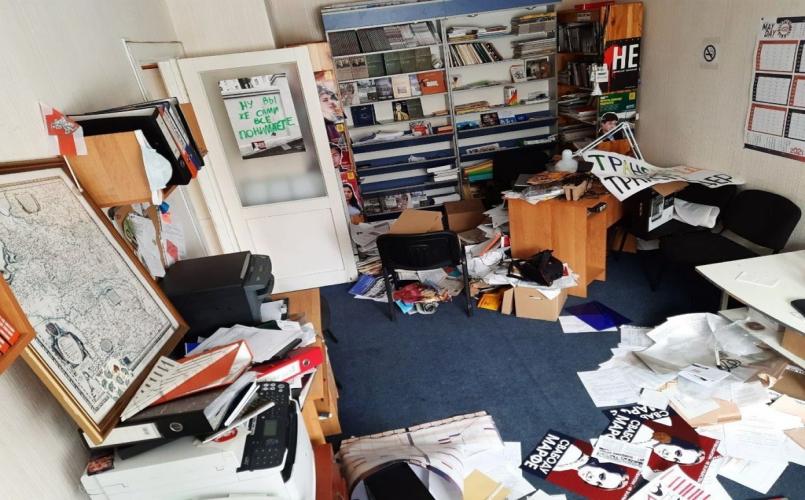 CSP: Unprecedented crackdown on Belarusian civil society must be stopped

Following a renewed wave of persecution of the Belarusian human rights defenders, civil society activists and independent journalists, members of the Civic Solidarity Platform (CSP) strongly condemn actions of the Belarusian authorities and urge them to stop the harassment and show genuine respect towards the rights of those who seek to protect the rights of their fellow citizens and not to criminalize their legitimate human rights work.

On 16 February 2021, over 40 human rights activists and journalists have seen their offices and houses being searched as a part of a concerted crackdown against the civil society of Belarus. The police raided the central office of the Belarusian Association of Journalists and the two Minsk offices of the Human Rights Center Viasna, as well as Viasna’s office in Mahilioŭ. The central office of the independent Belarusian Radio and Electronic Industry Workers’ Union REP was also searched.

The raid affected the private apartments of numerous human rights defenders, including BAJ leaders Andrei Bastunets, Barys Haretski and Aleh Aheyeu, as well as the organisation’s legal adviser Kristina Richter, Viasna Chairperson Ales Bialiatsky, and Viasna members Andrei Paluda, Pavel Sapelka and Dzmitry Salauyou and several Viasna activists in other cities. Several dozen human rights defenders and journalists and their relatives were targeted in Mahilioŭ, Brest, Viciebsk, Homieĺ, Mazyr, Rečyca, Baranavičy and other cities. The apartment of the coordinator of the BySol initiative Andrej Stryzhak and the apartment of his parents were also searched. Although most of the activists were released without charges, equipment, cash, bank cards and personal belongings of human rights defenders and journalists have been confiscated by the authorities. A few activists remain in detention.

According to the official statement of the Investigative Committee of the Republic of Belarus, the searches are supposedly linked to a criminal case opened under Article 342 of the Criminal Code of the Republic of Belarus (“organisation and preparation of actions that grossly violate the public order, or active participation in them”) and the likely charges will include “funding of the protests”. The current wave of detentions and raids of offices and apartments was preceded by recent arrests of media manager Andrei Aliaksandrau, member of Viasna human rights defender Leanid Sudalenka and their colleagues, toughening of criminal charges against the coordinator of Viasna’s volunteer programme Marfa Rabkova, and a smear campaign in the state-controlled media, picturing human rights NGOs as “terrorists”. All these actions by the authorities are clearly aimed at punishing human rights defenders and independent journalists for their peaceful and legitimate work, intimidating them, and paralysing their activities. The magnitude of the attack on civil society and independent media in Belarus is unprecedented throughout all of the OSCE region.

CSP members express their solidarity with all the colleagues in Belarus, including member organisations of the CSP – Human Rights Centre “Viasna” and the Belarusian Association of Journalists – and demand that the authorities of Belarus reverse this negative trend and bring their policies and practices in compliance with their OSCE commitments and their obligations as a party to the International Covenant on Civil and Political Rights. The authorities must immediately cease the attack against Belarusian human rights defenders, journalists, civic activists and their organisations. The charges against them must be dropped, detained activists must be released, and confiscated equipment must be returned to the respective owners. Belarusian authorities must guarantee the rights of human rights defenders, civic activists and journalists and not criminalize their legitimate work.

CSP members call on international organisations and institutions, including the OSCE, the EU, the UN and its member and participating States to immediately and publicly condemn the unprecedented persecution of Belarusian human rights defenders, civic activists and journalists, as well as to take relevant and effective steps that underline the unacceptability of the Belarusian government’s repressive policies. The international community has earlier recognised the important work of “Viasna” and the Belarusian Association of Journalists with prestigious awards. Now it is the time to protect them and other Belarusian human rights defenders and journalists from brutal repression by the government. The massive scale of persecution requires a swift, coordinated, and multilateral response.

Photo: The regional office of the HRC Viasna in Mahilioŭ