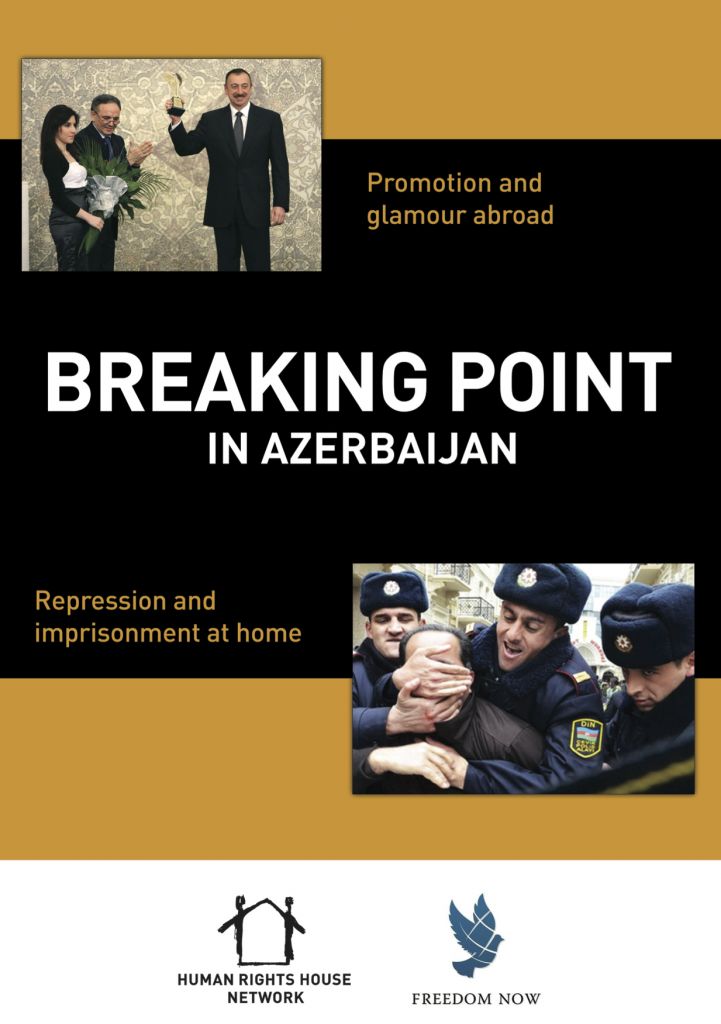 (Brussels) – In recent years, Azerbaijani authorities have intensified a crackdown on civil society and devastated critical voices, without regard for domestic or international law. This crackdown is in stark contrast to the polished image of a modern and prosperous European state that President Ilham Aliyev has presented to outside observers.

The joint report, “Breaking point in Azerbaijan: Promotion and glamour abroad, Repression and imprisonment at home” Freedom Now and the Human Rights House Network, provides a comprehensive analysis of the methods Azerbaijani authorities are using to repress civil society in the country. Download the report on the right side of this page.

“It is clear that Azerbaijan has reached a breaking point,” said Maran Turner, Executive Director of Freedom Now. “Since 2009, Azerbaijan has adopted legislation, in direct opposition to the country’s obligations under international law, which restricts the rights to freedom of expression, assembly, and association and criminalises the right to be a human rights defender. This legislation reveals a regime which has no intent to fulfil its obligations to the international community or its own citizens.”

In addition to the legislative measures to supress civil society, the report documents the strategies used by the Azerbaijani authorities to silence human rights activists. These strategies fall into three categories: First, authorities rely on “patently politically-motivated charges,” such as inciting hatred, mass disorder, and treason. Second, authorities have been known to resort to “fabricated charges,” including drug and weapon charges, and hooliganism. Third, the government has more recently confounded and alarmed international observers through the use of special “organization-directed charges.” The latter include charges of illegal business activity, tax evasion, and abuse of office, and rely upon a deeply flawed legal theory.

“The Azerbaijani authorities must immediately and unconditionally release and rehabilitate all leading civil society actors,” said Florian Irminger, Head of Advocacy at the Human Rights House Foundation.  “The authorities must also conduct a prompt, thorough, and impartial investigation into all cases of detention, torture, and other human rights abuses directed against human rights defenders, journalists and activists, and provide appropriate compensation to the victims of such violations. Until that time, the international community must cease sending high level representatives to economic, sporting, and cultural events organised in Azerbaijan.”

The report documents serious procedural and due process violations before and during the trials of these prisoners of conscience, including incidents of torture or mistreatment, lack of access to lawyers, dismissal of routine motions, and exclusion of vital evidence introduced by defence lawyers.

The report sets out specific recommendations to the international community, including:

•  All political leaders and institutions should publicly and privately call for the immediate and unconditional release of all leading civil society actors.

•  Political leaders of all states, the European Union, and regional and international organizations must stop honouring events organised in Azerbaijan with their presence at opening and closing ceremonies, as long as the government has not taken clear steps to fulfil its obligations under international law and its commitments to the Council of Europe to release prisoners of conscience.

•  Request that the United Nations High Commissioner for Human Rights present to the Human Rights Council, in an interactive dialogue, a comprehensive report on the human rights situation in Azerbaijan and the environment for human rights defenders in the country.

•  Apply targeted sanctions against those responsible for the misuse of law to imprison human rights defenders, journalists and activists, including restricting rights to travel abroad and freezes of personal assets of those violating the rights of individuals, such as prosecutors and judges.

For inquiries about the report: