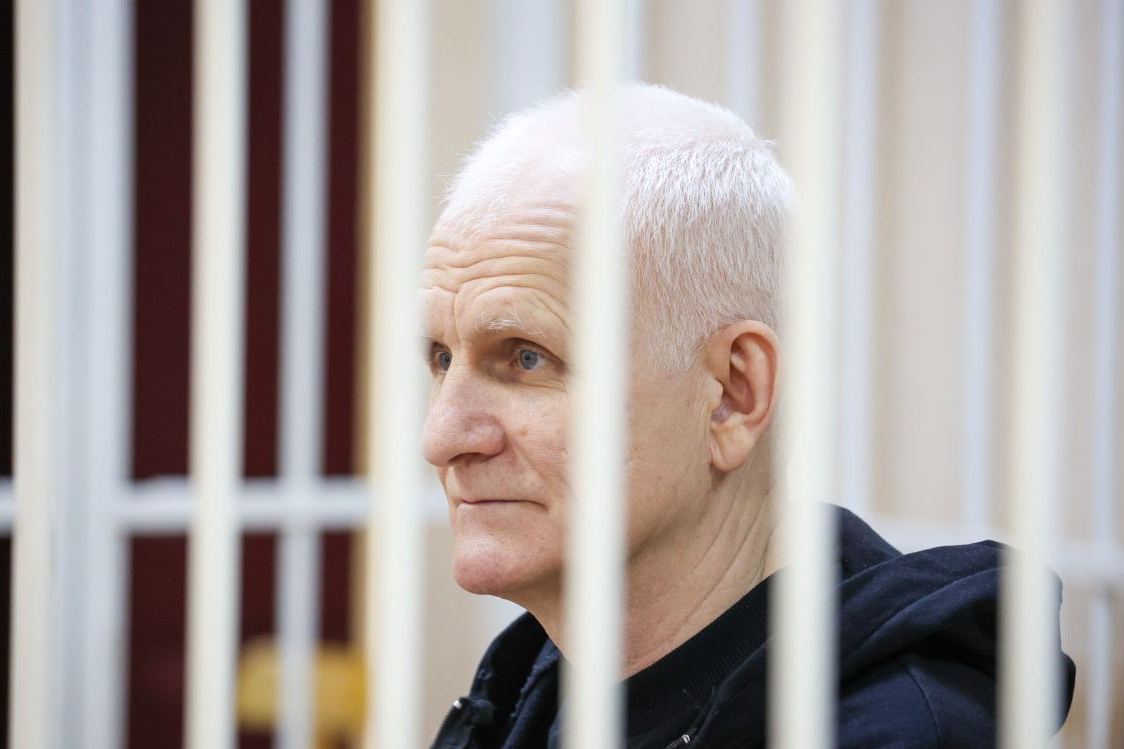 People being imprisoned or put on trial during the Christmas and New Year celebrations is common practice in several authoritarian countries. The authoritarians strike when the attention of the diplomats is absent and the people are preoccupied with their own family celebrations. A few years ago, Azerbaijani police kidnapped a prominent anti-corruption blogger over this holiday period. Last year, the Russian organisation Memorial was forced to close a day before new year’s eve. In 2023, Putin began bombing Kyiv after only fifteen minutes into the new year.

Aleksandr Lukashenka, who is referred to as Europe’s last dictator, also saw no reason to let the Christmas celebration put a damper on the ongoing repression. With so many ongoing politically motivated cases, the court had no time to lose. Friday 6 January was the start of the Orthodox Christmas holiday. One day earlier, the trial against the Belarusian Nobel Peace Prize winner Ales Bialiatski began.

In Autumn 2020, when hundreds of thousands took to the streets to demonstrate against the fact that after 26 years in power, Lukashenka had declared himself the winner of the election, Ales and his colleagues in Viasna documented how the government used violence and torture against the arrested demonstrators. Now Ales and his colleagues stand accused, as a reprisal for their legitimate human rights work, of smuggling, and for having financed campaigns that “destroyed peace and order”. For these charges, they risk between 7 to 12 years in prison.

“It just so happens that people who value freedom the most are often deprived of it.”

We had hardly heard anything from Ales since he was imprisoned. In January 2023, the first photos appeared since his detention. There he is sat, handcuffed, in a black hoodie inside a cage in a courtroom in Minsk while holding a plastic bag with court papers in it. In total, the criminal case included more than 283 files containing more than 300 pages each. In the photos, the look on Ales’ face says more than any report about prison conditions, and what the struggle for freedom has cost.

The fact that he is held in a cage in the courtroom should in itself not be shocking, as it is common practice in Azerbaijan, Russia and Belarus to keep the accused in cages, even if this practice violates the international legal principle that everyone must be considered innocent until proven guilty.

Despite demands from the EU Parliament and the Nobel Committee, Ales was not allowed to come to Oslo [in December 2022] to accept the Nobel Peace Prize. Instead, it was his wife, Natalia Pinchuk, who delivered the acceptance speech with a dignified voice, based on a quotes from Ales. He was able to convey only a few sentences orally to his wife through a glass wall a month after the price was announced. It was the first time she met her husband after his imprisonment 1.5 years earlier. He was not allowed to hand over a written speech to her.

“It just so happens that people who value freedom the most are often deprived of it”, were the opening words of Ales’ quote read out by his wife. In style typical of Ales, he made sure to highlight that colleagues in Azerbaijan, Uzbekistan, Iran and Hong Kong faced a similar predicament to his – locked behind bars in their respective countries. Ales has, himself, in the past actively called for the release of other imprisoned human rights defenders. Many of them returned the favour when Ales was in prison from 2011-2014 calls of “Freedom for Ales Bialiatski” were first raised. After great national attention and international pressure, Ales was finally released six months before the sentence was due to expire. It was another time, when you could count political prisoners on one hand. As of today, 20 January 2023, there are more than 1,400 who have been sentenced to prison or are awaiting sentencing for politically motivated activities.

14 July 2022: Azerbaijani former political prisoner Intigam Aliyev marks one year since the arrest of Ales Bialiatski and his Viasna colleagues.

In the past, trial hearings could serve as a break from the isolation of the detention centres, an arena for delivering a message through a defence speech. A chance to see friends and colleagues as audience members in the courtroom. And for colleagues to give their support through the testimony in court. This was the case when Ales was charged in 2011. This time, there were few familiar faces among the audience. In December 2022, many of Ales’ colleagues from Viasna and other human rights organisations were in Oslo to participate in the solemn celebration of the award. Most of them had left Belarus when the raids on civil society had become commonplace. They could not go back. Others were refused entry at the court door. Some of the few diplomats who had come to observe were not allowed in. Human rights defender Nasta Loika, who had stayed behind to observe court proceedings, was herself arrested during a court hearing last autumn. At the time of the publication, she is still inside.

In his Nobel speech, Ales highlighted the struggle for the Belarusian language: “I began to be critical of Soviet reality early on. Among other things, I faced a sharp restriction on the use of the Belarusian language, with the policy of de-Belarusianisation, which was carried out then – and is still being executed today. (…) There is still a threat to the existence of Belarusians as a nation and people. It is a dramatic mistake to separate human rights from the values of identity and independence.”

Despite more than 18 months in inhumane detention, Ales held strong to the principles he has lived by and worked for. On the first day, in a cage with handcuffs, he demanded the trial to be held in Belarusian, their own language. The call was refused by the judge. In his Nobel speech, Ales echoed the message of Pope John Paul II when he visited communist Poland in 1980: “Don’t be afraid.”

By making his principled call in court, Ales embodied the spirit of these three simple words.

Show your solidarity, write to Ales Bialiatski and other Belarusian political prisoners

Several prominent Belarusian political prisoners, including Ales Bialiatski, have commented on the importance of receiving letters of support for those behind bars. It shows they are not forgotten and can brighten dark days.

Write a digital greeting and volunteers from Solidarity Postcards Atelier will send it for you.