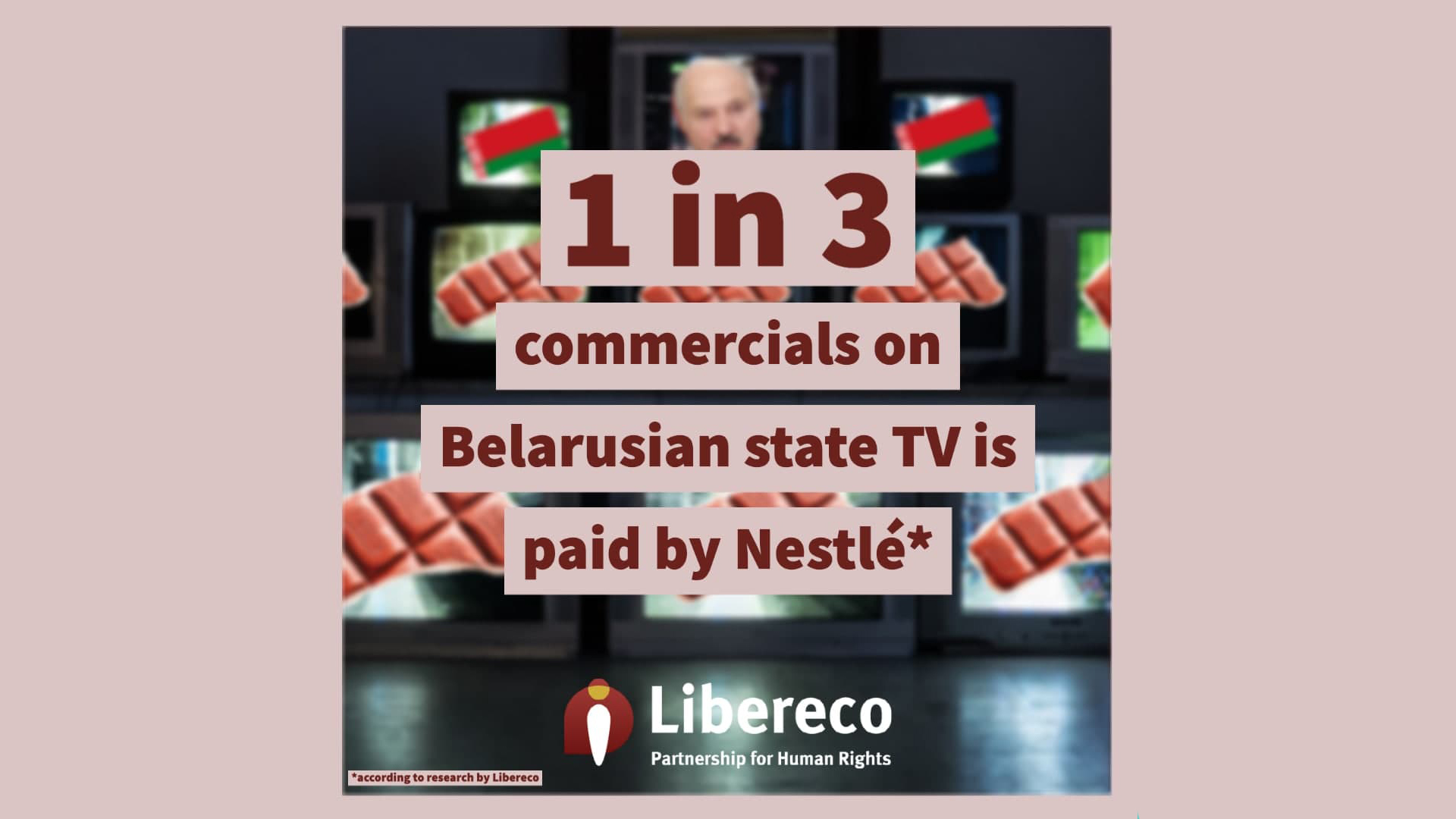 Human Rights House Foundation joins over 50 non-governmental organisations from 18 countries in calling for Nestlé to immediately stop advertising in all state-controlled Belarusian media.

We are writing to you today on behalf of 47 non-governmental organisations from 18 countries about Nestlé’s advertising on Belarusian state television. Through your advertising, Nestlé directly finances the state propaganda of the dictatorial regime in Belarus and the associated discrediting of the Belarusian democracy movement.

Since the summer of 2020, more than 40,000 people have been arrested in Belarus for political reasons, and thousands of them have been tortured or ill-treated. Several opponents of the regime have reportedly been killed. Belarusian human rights organisations have currently recognised more than 500 detainees as political prisoners. All these human rights violations are ignored by the Belarusian state media, which are co-financed by Nestlé’s advertising.

In an unprecedented act of state terrorism, on 23 May 2021 the Belarusian regime hijacked an Irish airline Ryanair plane en route from Greece to Lithuania in Belarusian airspace. When the plane was forced to land in Minsk, Raman Pratasevich and his girlfriend Sofia Sapega were arrested – both have since been designated political prisoners of the Belarusian regime by Belarusian and international human rights organisations.

Subsequently, the forced confessions of guilt and interviews by Pratasevich and Sapega were broadcast on Belarusian state television. In the case of Raman Pratasevich, traces of physical abuse were clearly visible.

Nestlé places advertisements for its coffee, chocolate bars and cat food alongside this terrifying display of frightened and abused opponents of the regime. Monitoring of advertising on Belarusian state television has shown that one in three commercials are from Nestlé. No other Western company finances the inhuman propaganda on Belarusian state television more than Nestlé.

The situation of media freedom in Belarus has been alarming for many years. In the Reporters Without Borders press freedom ranking, Belarus is ranked 158 out of 180 countries. On 18 May 2021, the most popular independent Belarusian website TUT.BY was shut down. According to the Belarusian Association of Journalists (BAJ), 25 media workers are currently imprisoned, including 12 TUT.BY staff and 5 Press Club Belarus staff.

In response to the ongoing repression of media freedom and due to the lack of protection of independent journalism in Belarus, the European Broadcasting Union (EBU), an association of 69 broadcasters from 56 countries, suspended the membership of Belarusian broadcaster BTRC on 28 May 2021.

We strongly welcome the EBU’s decision and we expect Nestlé to do similar, and distance itself from the Belarusian regime. Nestlé must no longer be complicit in the crimes of the Lukashenko regime and the grave human rights violations in Belarus by financing Belarusian state television through advertising.

We call on you to immediately stop Nestlé’s advertising in all state-controlled Belarusian media and the direct financing of the propaganda of a criminal regime that this entails.