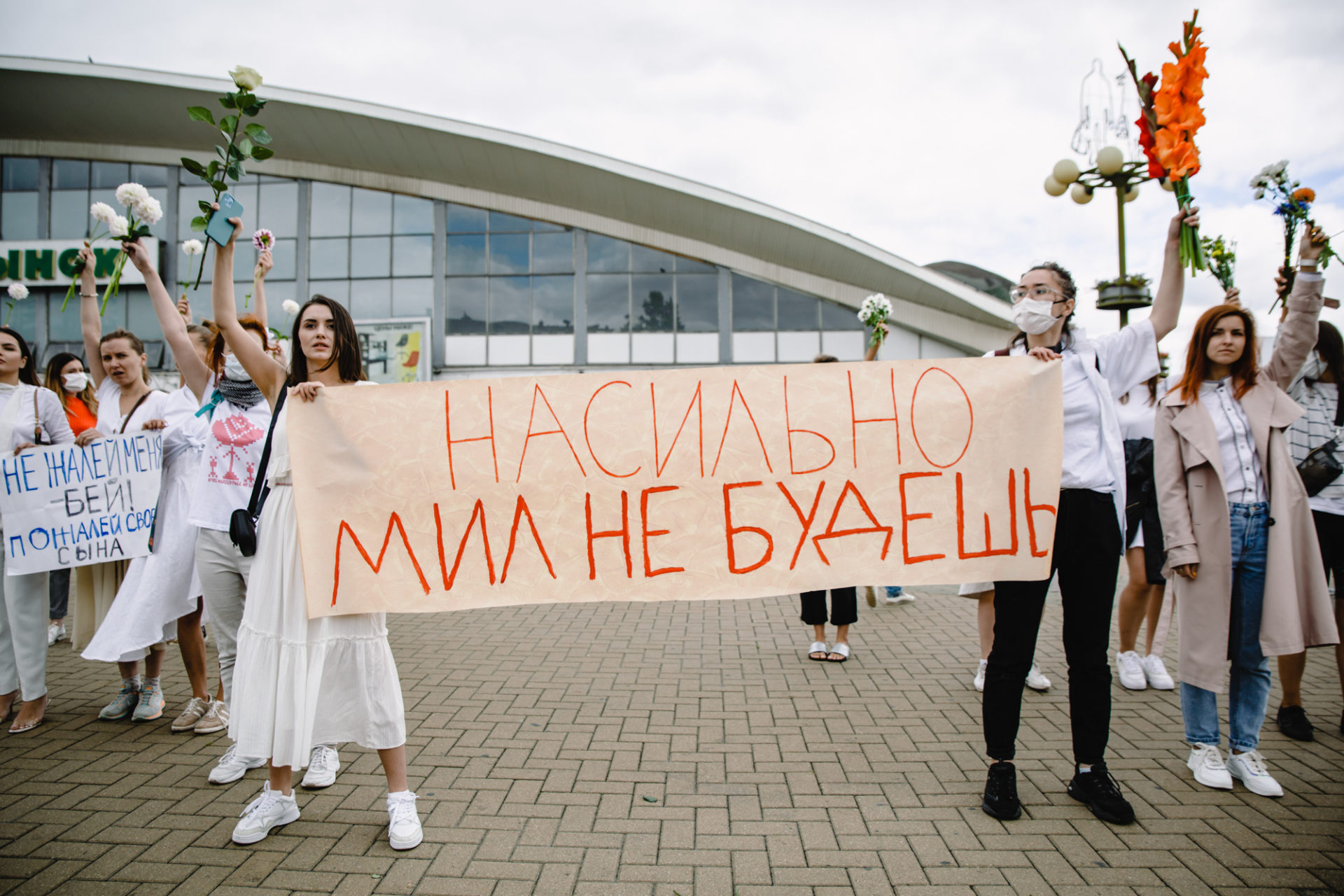 “The very first women-only protest happened at midday on Wednesday, 12 August 2020. Women all dressed in white gathered in central Minsk, to show that we protesters are peaceful, and we are against violence.”

As protests in Belarus have continued since the 9 August 2020 presidential election, the face of this movement has been female. In this interview, Maryia Sliaptsova, a human rights lawyer, talks to Human Rights House Foundation about her experience during the protests. This interview has been edited for length and clarity.

The registration of Sviatlana Tsikhanouskaya happened partly because [President] Lukashenka did not see a woman as a possible opponent, she was ‘weak’ in his eyes. Women, in turn, decided to use these patriarchal views to our advantage.

“In the weeks following the 9 August election in Belarus, the majority of arrested protesters were men. In response, women began linking arms and forming human chains around the men, not letting the riot police arrest them.”

“Women have always been active in protests on a par with men. So women were also arrested during previous protests, including protests after the presidential elections in 2006 and 2010. What is new this year are these women-only protests.”

“Before the women-only protests, all the post-election protests were met with an unprecedented level of violence from Belarusian police and OMON [Belarusian Riot Police]. In some places in Minsk and in the regions, people were building barricades, and this was used by the state media to prove that the protests are violent.”

“The women’s protest was aimed, among other things, at changing this narrative and to show that the majority of protesters are peaceful, and do not pose any danger to policemen.”

“I decided to participate in the protests as I simply cannot stay at home when horrible injustice is happening in Belarus. It pains me to see how people were first deprived of their voice during the elections, and then treated so inhumanely after for protesting peacefully.”

“Moreover, I am an educated human rights lawyer, I have spent almost one-third of my life studying human rights law, so my protest is based not only on my feeling of injustice, but also on my knowledge that the police violated international jus cogens norms, the absolute prohibition of torture and inhuman treatment, and I cannot stay at home until the victims get justice.”

“Three days after the election, my husband and I were arrested. Our car was stopped far from any protests, the riot police threatened us and told us to open the galleries on our phones, and when they saw photos from the protests there they immediately began to be very rude towards us, saying that they will ‘show us changes, if we wanted changes’, and after some time we were brought to the police station.”

“When we came to the police station, they separated us, I was told to stand facing the wall. I could not look around. The police started beating someone and from the sounds and words the police were shouting, I could tell they were beating my husband.”

“It was scary to hear the sounds of police batons on the human body. Knowing that this is happening, and not being able to help. Knowing that if you try to say anything, then you may be next.”

“I think that the most tiresome thing is the feeling of being unsafe. For the past few months, Belarusians have been learning to spot minivans without license plates, to choose routes where it is easier to run away and hide, to spot potential plain-clothes policemen.”

We learned to be prepared for detention and to plan ahead – to leave a copy of your house keys with someone who can feed the cats, to have an SOS button on the phone. We are constantly aware of our surroundings, as we know that the danger can come from anywhere.

“If you participate in the protest, you always risk getting arrested and then either getting a fine or spending five to 15 days in administrative arrest in jail. For now, the worst-case scenario is criminal charges for organising mass protests or other unsubstantiated charges.”

“It’s also a possibility that a person who is arrested will be subjected to inhumane treatment at the police stations or jails. It’s difficult to predict what will happen to an arrested person, but people usually understand that there is a risk of being beaten by the riot police. Still, they go out to protest.”

“Going out to the protests now, as scary as it may be, is also very inspiring. You see how many people are standing next to you, you understand that you are in the sea of like-minded people who are tired of state lies, and who want a better future for our country. It’s an incredible feeling of solidarity, which helps me not to lose hope.”

I sometimes hear that Belarus is in the Russian sphere of interest, therefore the future of Belarus should be discussed with Russia. I would say that it is a very 19th century mentality. Belarus is an independent country and its fate should be determined by the Belarusian people.

“Outside support is very important for us. Please, keep an eye on Belarus, do not forget that we are fighting for our freedom and rights.” 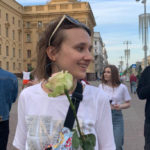