Home
/
Latest
/
“We had to create a movement” 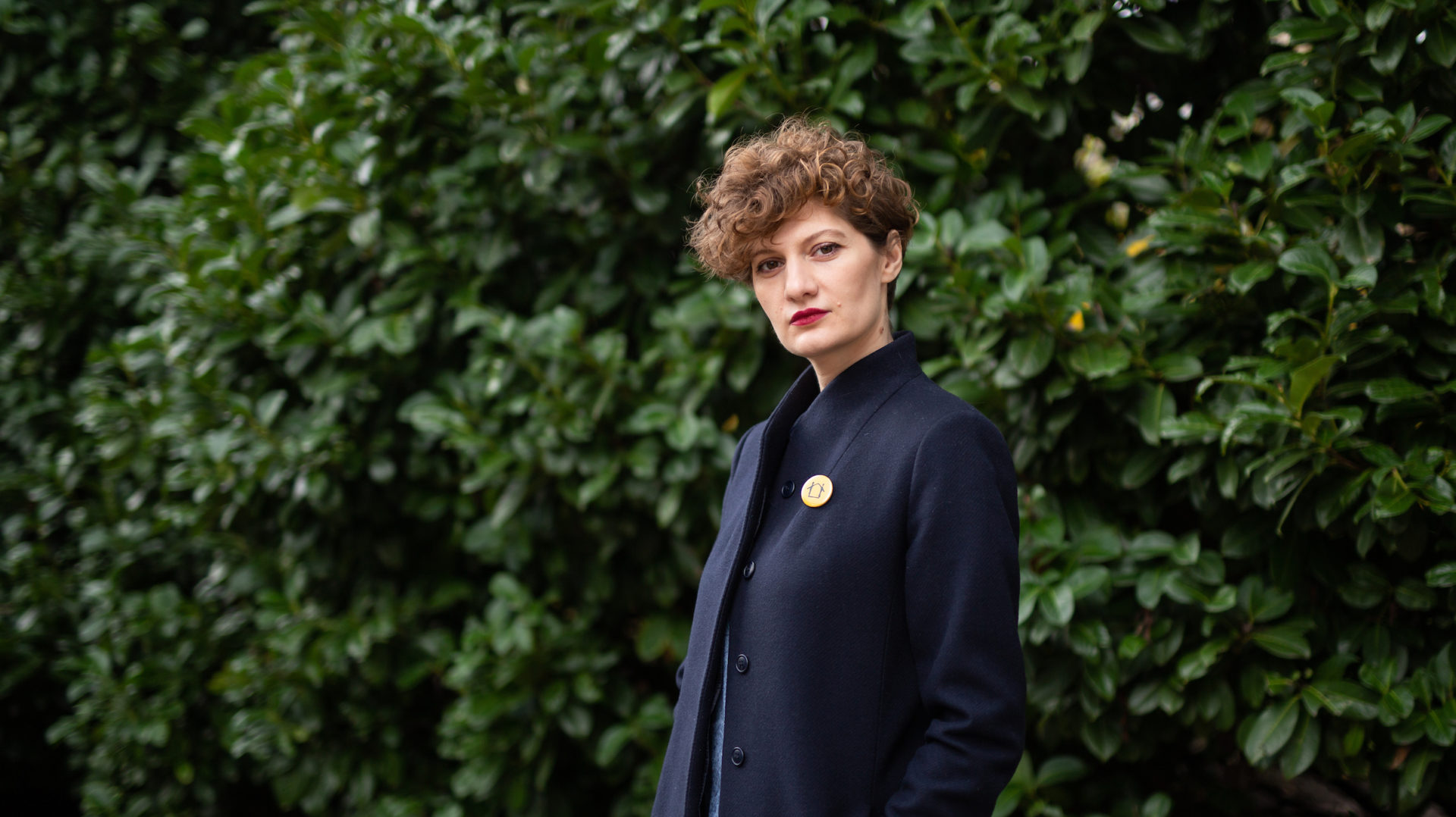 “We had to create a movement”

Concerned that femicide was becoming the social norm in Georgia, Baia Pataraia mobilised a Women’s movement against domestic violence and the murder of women that has grown to 3000 activists on Facebook. HRHF spoke to the chair of Human Rights House Tbilisi, and the director of Sapari about her work, the challenges facing Women Human Rights Defenders, and how to empower the next generation of young Georgian women.

In 2014, there were a lot of femicides committed as a result of domestic abuse. It felt like this was becoming normalized… like everyday news – just statistics, and this was scary.

In response, Baia Pataraia along with a group of around 10-15 other women decided that, following every new femicide, they would take to the streets and demonstrate.

One case, in particular, gripped the country. On October 17, 2014, Marika Tsivtsivadze, a young lecturer at one of Georgia’s biggest universities was murdered at the university she worked by her former partner who then killed himself.

All of this happened in the corridor of the university where people were going about their lives – in front of cameras, in front of students.

“I started writing to my friends – we had to meet and talk about this. One friend said that she would of course come and that I should ‘write to everyone’ – she meant our other friends, but I understood it literally.”

This literal interpretation accelerated the movement. Pataraia began scouring the comments sections on posts and articles on the murder. She wrote to every woman she could. She didn’t know these women, and they didn’t know her, but they were united by their outrage and need for change.

Creating a movement for women

Around 45 women of all ages showed up to an initial discussion. Not limited to NGOs and activists, Pataraia recalls that many of them were influential, some famous; leaders, professors, women in media, women in arts.

At that meeting, we decided that we had to do something… we had to engage every woman we could… We had to create a movement.

In just over a month, on 25 November 2014, there were simultaneous demonstrations in 25 cities in Georgia. In Tbilisi and in the regions.

“We had a very big campaign prior to it, all kinds of people participated – journalists, actors, writers, famous people, even nuns from the orthodox church.”

“The government changed its attitude. Legislation changed, and this was a strong kick-off for the movement, it is still going strong. We organise demonstrations, lobby and advocate for legislation and policy change – we are very successful and strong.”

“We have activities on International Women’s Day (8 March), International Day for the Elimination of Violence against Women (25 November), Labour day (1 May), and this August we also added pay gap day.”

Authoring the law on domestic violence

Following her first legal consultations with victims of domestic abuse in 2008, Baia Pataraia discovered the severe situation that so many women live in, as well as just how hidden the problem is.

Pataraia began working for the Georgian government at the Ministry of Justice in 2009. Over the course of four years, she discovered that issues like domestic abuse were not being worked on. The issue was invisible, and the politicians didn’t seem to care.

“I made sure I got in on every state council, every bill that was related to women’s rights, and I authored the article on domestic violence in the criminal code of Georgia in 2012.”

Her work at the government has occasionally led to questions about her role in independent civil society, sometimes from other defenders. Pataraia is proud of her work at the Ministry, she feels that she learned and achieved much, and this has made her more effective.

When I left ministry of justice, I knew that I had to dedicate all of my time to human rights and specifically women’s rights.

Transitioning to full-time human rights work brought a new set of challenges. Harassment and cyberbullying are an unfortunate and inseparable part of the life and work of human rights defenders according to Baia Pataraia, especially for women.

“Human rights defenders have to be very harsh, outspoken, vocal and critical towards the government, sometimes even the media, the church – anyone who holds power, and there is always backlash.”

In some authoritative counties, they can physically injure or kill you – in countries like Georgia, you have to deal with disinformation, smear campaigns, attempts of marginalisation. In Georgia, they will only try to kill you socially.

“When you are a woman with a cause, and you are very vocal, you somehow no longer fit into the role of being a ‘good woman’. A good woman has to be calm, obedient, well behaved, she never shouts, and never fights.”

“It is like you are somehow abandoning your gender – they try to take away your womanhood. They portray you as some other creature. You become a cautionary tale for young girls, ‘you shouldn’t be like her…’”

Men need to self-reflect and hold each other accountable

When asked about whether male Human Rights Defenders can have a role in helping with the challenges of their female counterparts, Baia Pataraia says that the role of men is complicated.

“A man’s voice always reaches more people. When women talk, male human rights defenders want to remain silent, to give space, because when they try to talk on women’s problems, somehow they very easily get into media – they are very noticeable.”

“Male human rights defenders are afraid of being patronising, as they have a feeling that strong women do not need their protection, which is obvious and understandable. They prefer to remain silent. They have a hard time in expressing their support. Sometimes they express it personally, but not publicly.

What men can do is talk to other men, shame those who are violent. Try to analyse and discuss why men violate the rights of other groups. They can do more self-reflection. They should hold each other accountable. That’s what we need from men.

Baia Pataraia has occasionally received threats, one case was reported to the police. She has been approached in the street, mostly by elderly women criticising her for her behaviour as an outspoken woman.

“Hate speech and humiliation is very common on social media – people get very brave with their keyboards and say things that they would never dare to say to your face.”

Addressing the emotional effects of harassment and abuse is a difficult balancing act, and Pataraia says that the balance lies in building protection around yourself and at the same time maintaining sensitivity.

You need to become immune to abuse, but you really have to remain sensitive towards people. If you lose this, then you’re going to lose the feeling of empathy, and desire to help.

“I think that HRDs need a lot of self-care and help from others and rest. They have to be taken care of, but very few people understand or know this.”

Overcoming the barriers that young girls are raised with

When girls are raised to be ‘good’ young women, they are taught things that become barriers… These barriers are difficult to overcome later in life.

“As a result, young girls very frequently question themselves and they lack self-confidence because of the way they are raised. They demand too much from themselves.”

In September 2018, the “National Leadership Academy” for women was launched in Georgia, Co-organised by Human Rights House Tbilisi and IREX Europe. Women from Georgia and neighbouring Azerbaijan participated in sessions on gender equality, promoting equality within the workplace, advocacy, and media and creative campaign planning. Following the success of the academy, the leadership academy was held again in March 2019.

“During the National Leadership Academy, we try to undo these barriers and empower women. We want to increase their practical skills, we remind them that they are capable of a lot, and that we believe in them. We can help them in the realisation of their ideas.”

“The Academy invites women leaders as guest speakers, and chooses the topics for discussion. It is also a good opportunity for networking. People come from various countries and share many problems and challenges in common.”

“Also they receive small funding if they have some good ideas that can be implemented. They are giving the opportunity to put in practice what they have learned during the academy.”

Pataraia sees the future of the Academy as being a place for women in all stages of their work. From nurturing beginners, to establishing a relationship with participants that lasts for years and keeps them coming back year after year.

One conference will not be sufficient, there has to be continuous cooperation and strengthening of these young leaders.

Baia Pataraia is a human rights defender and lawyer focusing on women’s rights in Georgia. She is the Chairperson of Human Rights House Tbilisi, the director of its member organisation Sapari, and the founder of the Georgian Women’s Movement, an informal social initiative group around 3000 women activists.

Prior to working at Sapari, Pataraia worked for four years at the international law department in the ministry of justice of Georgia.

Interviews with Defenders from the Human Rights Houses

“When I was a teenager I left Armenia because, as a gay person, I felt unsafe. I moved to the United States and found it to be a huge change. After living there for about 4 months I felt that if I wanted freedom and peace, then I would have to earn it – and that I wanted to work for change in my country.”

Read more in The Reality of LGBT+ activism in Armenia.

“In society, if we can resolve gender identity and orientation, other things would be very easy to resolve. Feminism is intersectional, you can’t raise the issue of patriarchy and only talk about women. Patriarchy attacks all kinds of people that aren’t the so-called social “norm”.

Read more in Fighting for Women’s Rights and Equality in Armenia.