Home
/
Latest
/
The reality of LGBT+ activism in Armenia 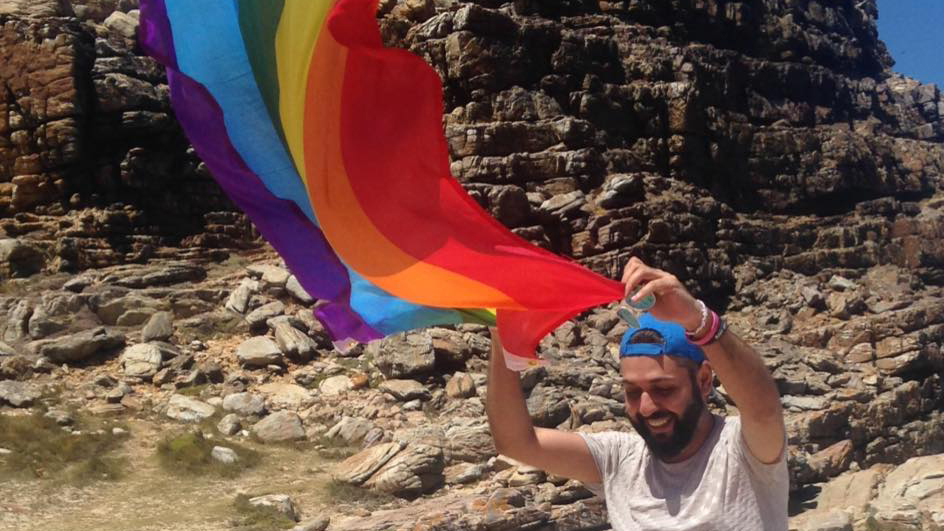 The reality of LGBT+ activism in Armenia

Mamikon Hovsepyan is an Armenian human rights defender who has been promoting equality and diversity and defending human rights in Armenia for 15 years.

Throughout these years he has faced threats, harassment and discrimination in many forms including even from other human rights defenders and members of the LGBT+ community.
In this interview, he spoke to HRHF about his early interest in human rights:

“When I was a teenager I left Armenia because, as a gay person, I felt unsafe. I moved to the United States and found it to be a huge change. After living there for about 4 months I felt that if I wanted freedom and peace, then I would have to earn it – and that I wanted to work for change in my country.

I returned to Armenia and became a volunteer, where I organised World AIDS Day events, and I also became a part of GLAG (Gay and Lesbian Armenian Group). I was initially interested in sexual health, but I realised that people do not care about their health if their basic rights are not protected and they lack the freedom of equality.”

Being LGBT+ in Armenia

The situation in Armenia that he returned to is one where LGBT+ people face discrimination and challenges in all walks of life.

“It is hard for them to come out to their families as parents, siblings or other close relatives can hurt them physically, psychologically or in other ways such as, limiting their communication or even throwing them out of the house.

In educational institutions, and at the workplace, people can face bullying if their sexuality is revealed. People are being fired or even prevented from employment due to discrimination.

We try to document these instances – sometimes we report serious threats to police but they usually refuse our complaints. There is no law that protects people from discrimination. Authorities use their power to spread misinformation and hate speech. The parliament and media become the stage for this because media in Armenia is not independent.” 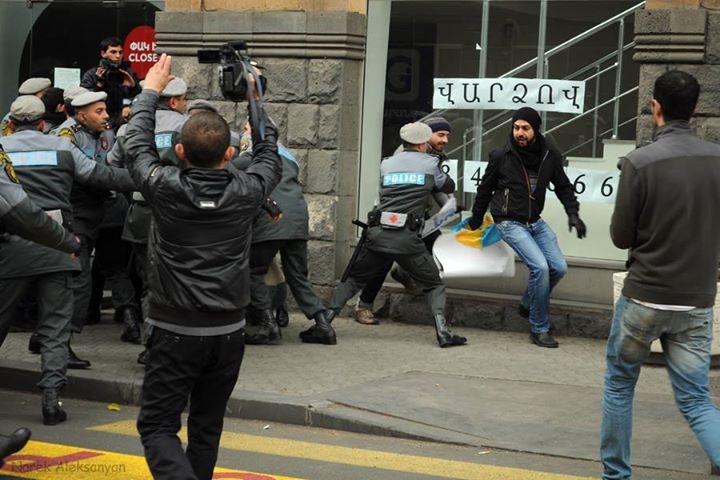 Mamikon Hovsepyan in 2013 participating in a protest where hundreds of people marched through Armenia to denounce visiting Russian President Vladimir Putin and protest against plans to join a Moscow-led customs union. Photo by Narek Aleksanyan

He elaborated on his own personal experience of being gay in Armenia commenting that “coming out is a complicated thing”:

“My parents found out about me when I was 18. I was not ready to tell them, but they saw me with my partner and had questions. I chose to not hide the truth and I told them everything. My parents are educated people and understood me, however, the influence of society doesn’t allow them to fully accept my sexuality. I later came out to some of my friends at University.

The first time I spoke in an official way about being gay was in 2016 during a press conference. It was not planned, a journalist asked me an ignorant and discriminative question, and I confronted her from my position as a gay man. Later another journalist, this time a friendly one, made a short movie about me as a gay activist.

Still, I wouldn’t say that I am completely out. My boyfriend’s parents don’t know about us, so I feel in the closet when I meet them. Some of my relatives suspect something, but my parents have asked me not to discuss it with them. There are also many cases where I must stay silent for the safety of others.”

Earlier in 2017, Mamikon Hovepyan received harassment on social media for posting photos of his own fingernails painted with nail polish. Some of the harassment he faced came from within the LGBT+ community:

“Harassment, hate messages and threats on social media are non-stop.

Some members of the LGBT+ community behave in this way because they are also victims of patriarchy and this way they try to show the society that they fit the norms and claim their acceptance by bullying others. I know many people by face and name – I have seen gay people among aggressors during a diversity rally.

Years ago I said that Mayor of Yerevan needed a handbook for human rights because he was clueless on the subject. A nationalist created a petition against me and it even received support from some gay people. When I asked them about this, the answer was that they were invited by their friends and ignoring the invitation could be suspicious.”

Commenting on how he deals with the hate, he said that “It is impossible to completely ignore but I try not to get emotional about it and I just let it go. This is hard, but I am getting better at it each year.”

The importance of gender equality

In addition to being a human rights defender and an LGBT+ activist, he describes himself as a feminist. He explained to us why gender equality is so important to him:

“Homophobia is a form of sexism and we need to break it. Feminism is all about equality and peace for me. I believe that when society starts to respect gender equality, then all other groups will be accepted and will enjoy equal opportunities and rights.”

When he co-founded PINK Armenia, there was a “total lack of awareness” of LGBT+ issues:

“Me and the other co-founders wanted to speak up, to say that we exist and we demand equality for our community, we wanted to break all the stereotypes about LGBT+ people.”

HRHF asked him if the name “PINK” was in some way a statement in itself:

“Something like that. Societies in the Soviet Union used to call gay men “light blue” and lesbians “pink”. Other factors that we took into consideration is that pink is recognised as an LGBT+ related colour. Yerevan is also called “The Pink City”. When people want to talk about ideal situations, they talk about pink dreams or looking through pink glasses – we thought that the work of the organisation would be a pink dream for many.”

Describing the work and the successes of PINK, he told us that:

“We work with the community to empower them and protect human rights. We also work on local and international advocacy. Awareness raising among general society is another focus. We use classic and innovative approaches to reach people through training, meetings, social media etc.

Armenian media has started to use proper terms and language talking about LGBT+ issues even if the content is homophobic. We have also created a discourse on sexuality issues in Armenian society. PINK is recognised by the community and has become a safe space.”

LGBT+ activists occasionally face discrimination and harassment from others working on the promotion of human:

There are still homophobic and sexist comments, but some have changed their attitudes.”

Describing being a part of Human Rights House Yerevan, he cited solidarity and support as the strengths of the House:

“It is hard to work alone but when there is solidarity among human rights organisations, as well as support and common platform, then we can unite our capacities and make the work more powerful.”

PINK Armenia has recently launched a new website called “Inqnus” aimed at providing training on sexuality and sexual health in general, as well as human rights, discrimination and other relevant topics:

“We had spent a lot of resources on training and while there is a great demand for information, people do not feel confident in attending. The online platform allows people to participate safely and anonymously. This solution is also cost effective.

We target young people, but anyone can attend. We plan on having sessions with experts such as psychologists, social workers, sexologists, psychiatrists and other mental health specialists.”

Thoughts on the future

All we need is proper education where people are not brainwashed but have access to information and are free to discuss it. We need free media – free from the authorities and from hate – an equal platform for all the issues and unbiased information.

If we have these things, society will become more tolerant and less aggressive.”

When asked about the next time he will paint his nails for Instagram, he replied:

“Huh, maybe not nails but I can do something else. I like to break stereotypes about masculinity and more importantly to start it from our community.” 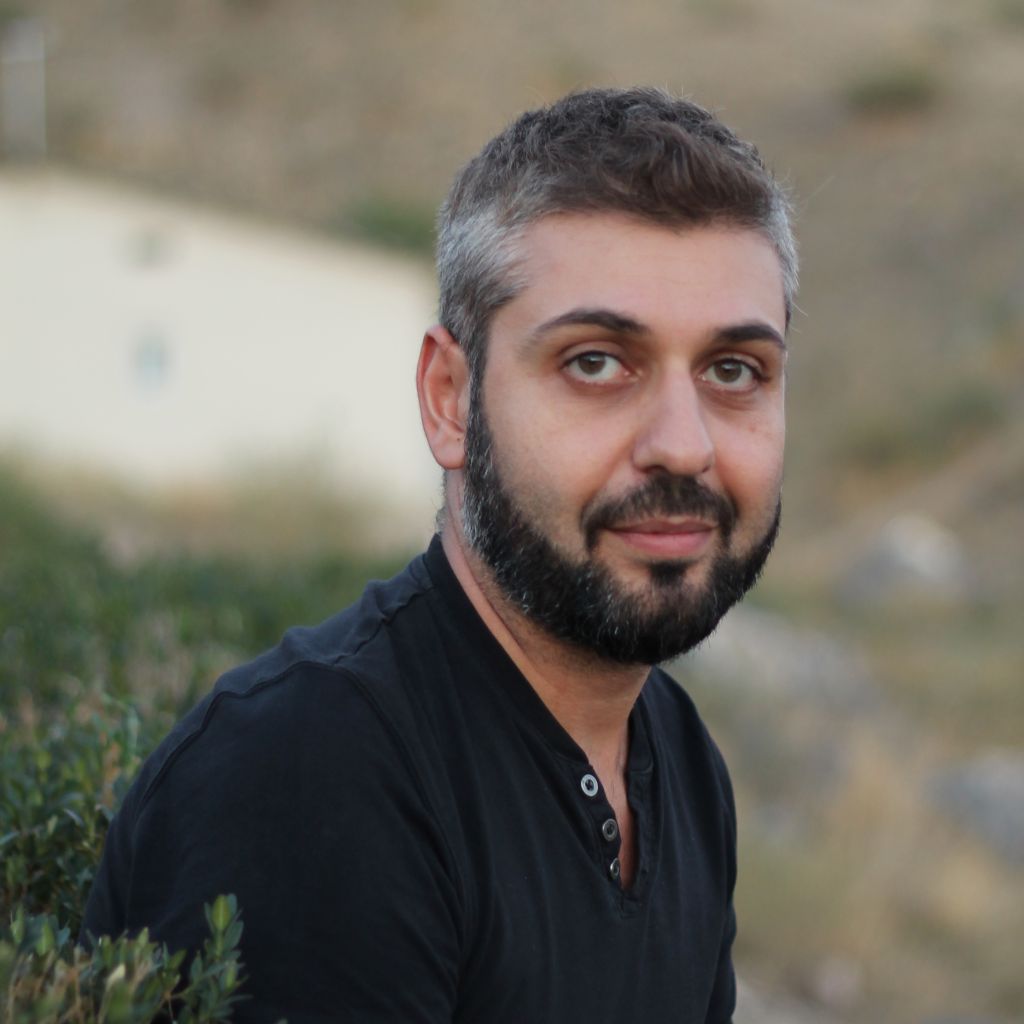 He is the Founder and Executive Director of PINK Armenia (Public Information and Need of Knowledge), an organisation focused on protecting LGBT+ and gender rights and equality, and a member of Human Rights House Yerevan where Hovsepyan serves on the board.

The aim of his work, and the work of PINK is to break stereotypes and protect the rights of the LGBT+ community and other vulnerable groups in Armenia.

Interviews with Defenders from the Human Rights Houses

“I fled Crimea on 16 April 2014. The main reason is that I received direct threats from the Russian special service that they would detain or kill me. One of my colleagues was actually captured and imprisoned by the Crimean self-defence forces during this time, although he has since been released. I have been detained twice by Russian law enforcement agents.
Read more in Responding to annexation of Crimea with human rights.

“In society, if we can resolve gender identity and orientation, other things would be very easy to resolve. Feminism is intersectional, you can’t raise the issue of patriarchy and only talk about women. Patriarchy attacks all kinds of people that aren’t the so-called social “norm”.

Read more in Fighting for Women’s Rights and Equality in Armenia.

“Many people think that if you have a women’s agenda, that it is sort of soft issue and that you don’t confront much. But it is not true – women’s rights cannot be at good level in a country where the general human rights record is poor. So, most of the issues which we combat are related to discrimination, which is not only related to traditions and stereotypes, but also to the lack of rule of law, corruption, and bad governance.”