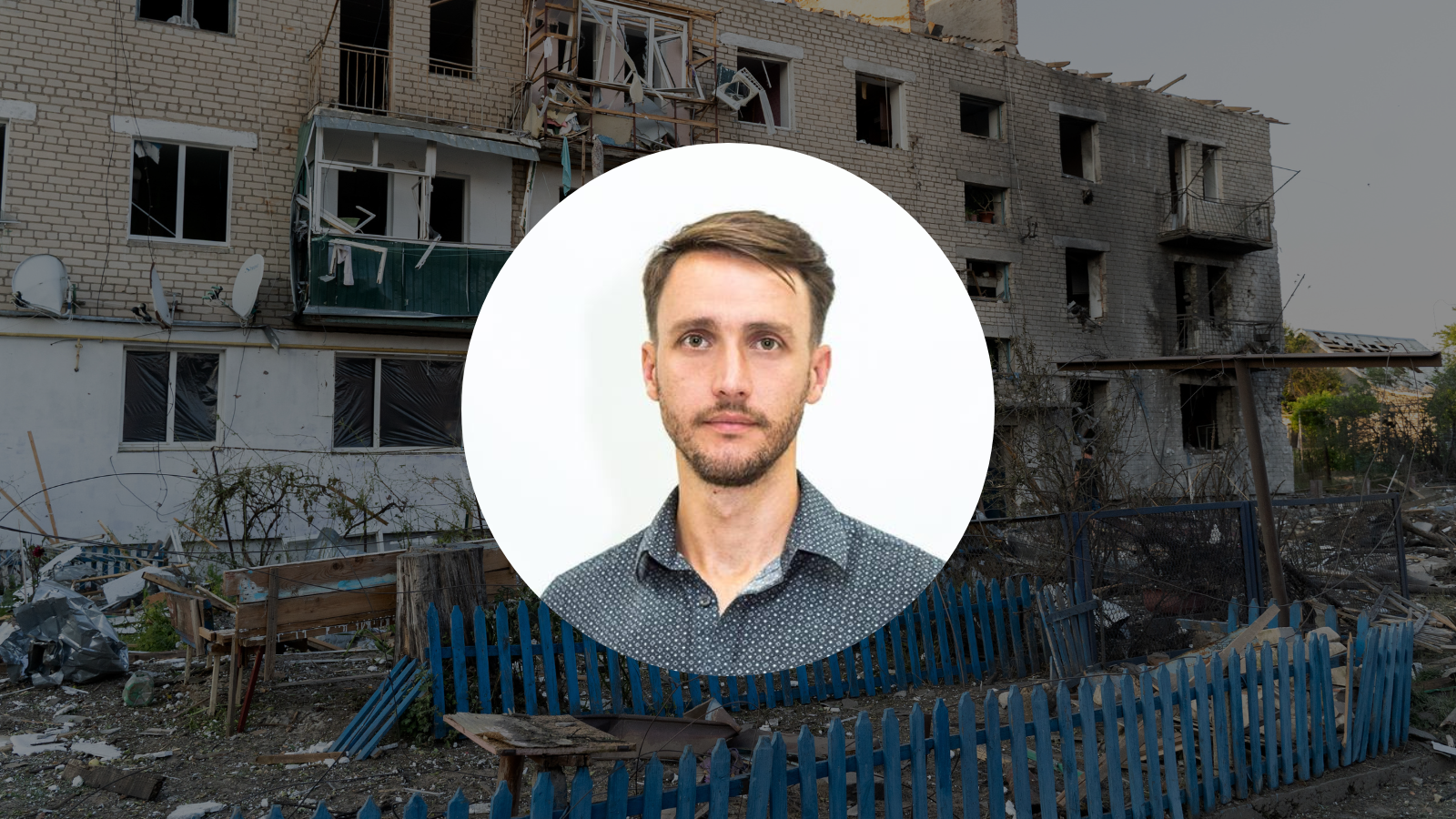 Following the launch of the full-scale Russian invasion of Ukraine in February, civic activist Artem Kostyuchenko and his family were forced to flee the Kherson region and relocate to Lviv. From there he continues his work and hopes to soon return to his home. This is article was written by Educational Human Rights House Chernihiv.

This article was originally published in Ukrainian by Educational Human Rights House Chernihiv.

Artem Kostyuchenko is a civic activist and is the head of the NGO “Young Initiatives” – one of the largest public organizations in the Skadovsk area and Kherson region.

After the launch of the full-scale Russian invasion of Ukraine on February 24, Artem and his family were forced to flee to Lviv. During this process, Artem received support as part of Educational Human Rights House Chernihiv’s Protection Programme.

From Lviv, Artem continues his work as a volunteer and a civic activist. He is also engaged in the relocation of the organization, as well as helping with the evacuation of his colleagues from Kherson region.

According to Artem, his main goal is to return to Kherson as soon as possible.

The military will do their job – they will liberate Kherson territory from the occupiers. And we, as activists, have to do our part. After all, the information front is equally important as the military one.

Activists targeted by the Russian military

Artem Kostyuchenko was luckier than some of his colleagues — on February 24, he was able to leave Skadovsk without any obstacles.

Later, he found out about the shooting of civilian cars as they tried to leave and the “basements” where activists who did not have time to evacuate ended up.

It is a known fact that activists like Artem are targeted by the Russian military due to their active public pro-Ukrainian positions, and for the work they do with the local population, preventing the “Russian peace” from firmly settling in people’s minds.

Artem says that he was taken by surprise by how quickly events developed.

I didn’t have an emergency suitcase, and I didn’t even have time to pack one although there was talk among our colleagues about the risk of a full-scale invasion. International organizations that we cooperate with even warned us about this, but I could not believe that this could happen in the 21st century.

“When my sister called early in the morning on February 24 and said ‘it started’ and that my wife and I should prepare, I understood that everything was complicated. My sister’s husband is a military man, so I believed her without hesitation. In half an hour, we packed our things: my wife and sister went to Kherson, while I stayed in Skadovsk.”

After that, Artem went to the Youth Center to collect water, and to bring equipment (laptops, photos, video cameras, etc.) with him. On the same day, he even managed to teach a lesson in one of the local schools where he taught computer science.

“I understood how important it was to talk to the children and explain what was happening. After all, the child’s psychological condition largely depends on the way information is presented. As a teacher, I realised my responsibility.”

Artem has since continued to teach online, though more on the subject of safe internet use.

The road to uncertainty

Artem Kostyuchenko left Kherson late in the afternoon on February 24.  On the way out of the city, he saw that Russian military equipment with markings had already begun to arrive.

“When we were leaving, several units of enemy vehicles crossed our path, mostly armored personnel carriers. And after driving about 40 km, we came across another convoy – there were already more than 50 units of equipment. I saw the people sitting on top of it, and I understood that they were not local. On one of the license plates, which was not completely smeared with dirt, I saw the designation RU and realized that they were Russians.”

Artem admits to difficult emotions at that moment. He saw roads mutilated by heavy machinery. Roads that had recently been built – roads that should have received tourists, not an occupying force. Dry grass was burning in the field, and explosions could be heard from the distance.

On the road ahead of him lay the Antonivsky bridge and uncertainty.

At that time, not many civilian cars were driving, because around 12:00 there was news that traffic through the Antoniv bridge would be stopped. But we decided to take a risk. I think they let us through because they wanted to disguise themselves as civilians. I saw several planes fly over Kherson. Then I had a clear feeling that I would not return home. I didn’t understand it until that moment.

Nevertheless, he managed to get to Kherson, and then he and his family relocated to Lviv.

“The road was difficult because all of Ukraine was going in the same direction, but we were already in Lviv on the night of February 25. I realised that I was lucky. As it was known later, already on February 26-27, the occupiers started shooting civilian cars.”

According to the media, hostilities took place in Skadovsk already on February 24, and the temporary occupation of the city started only in April 2022. Artem Kostyuchenko says that the occupation actually began in a way from the first days of the war.

Skadovsk was actually occupied on the first day of the full-scale war. There were many Russian soldiers around the city, although they did not have full control over the city. The Russian soldiers did not understand where they were and why they were here. They drove misinformed; however, their leaders were well-informed.

According to Artem, preparation at all levels had begun before the occupation.

“There were people in the city who communicated with the organisers [of the occupation] and were preparing for this. That is, there were many traitors, collaborators who affected the situation from the inside.”

“Although we understand that those who were waiting for the Russians were not so many, under the influence of propaganda, even those who took a neutral position broke down.”

“The ‘we were abandoned’ narrative spread widely and had serious consequences, because people began to believe it.”

“But at the same time, there was opposition from local residents, people went to protests and defended their position.”

Artem explains that it was not a typical occupation, because even the Ukrainian flags were still hanging for a long time. Looting was carried out under the guise of searches, but not massively, besides, there was no sign of violence. The occupying forces also came to Artem’s organization for searches:

“We had a volunteer center deployed: medicine, food, hygiene products, etc. From the first days of the war, our team, which remained in Skadovsk, volunteered. Although it was very dangerous.”

According to Artem Kostyuchenko, the Russian military was looking for activists.

“Among our colleagues, there were those who relocated to Europe because of the situation in Crimea and then returned to Ukraine. One of the members of our organization was kept ‘in the basement’: his ribs were broken, and he was tortured. Although he was not key in our organization. [The occupying forces] themselves choose whom to “hunt”. Local collaborators help them find activists. They came to some homes, took money and told the inhabitants that they had two days to leave… That is why it is very important for us to evacuate our colleagues from the Kherson region now.”

This is what Artem is doing now together with the team. Additionally, they are planning to launch a full-fledged office in Lviv that would help people from the Kherson region.

“We understood that a certain part of the team, which is already prepared to work fully, was evacuated. There are people who moved to Europe as well but are willing to work online from there. That’s why we started looking for funding, already found premises and plan to make repairs there. We also continue to provide advice for people. People from Kherson often ask us questions: what should we do after we leave, where should we stay for the night, how to move abroad, how to find treatment, etc.”

Artem also says that he would like to help the community from Kherson to integrate into Lviv’s culture and economy.

Lviv has become a hub that receives a large flow of people. We are learning to work with Western partners and would like to further help to integrate the Kherson community.

But the main goal, according to Artem, is to return to Kherson and contribute to the resistance via the information front.

“In addition to the military, there is also an information front and a front of people who are ready or not ready to return. We would like to show them that they are not forgotten…

Every minute lost in the occupation affects society, and we understand that. Besides all of this, we are also thinking about ideas that need to be spread, and how to look into peoples’ eyes when they feel desperate. This is a part of this war.”

Currently, Artem and his team continue to fight on their front and to prove to everyone that Kherson is unbreakable, Kherson is Ukraine!

The Protection Program operates with the support of the International Renaissance Foundation, the National Endowment for Democracy, Human Rights House Foundation* and other partners.

*Human Rights House Foundation works alongside five Human Rights Houses to improve safety and security of human rights defenders and organisations at risk. Together, as part of a network protection programme, we provide emergency and longer-term support to defenders at risk, respond to and advocate against reprisals, and work together to ensure systematic gains for the protection of defenders are achieved.