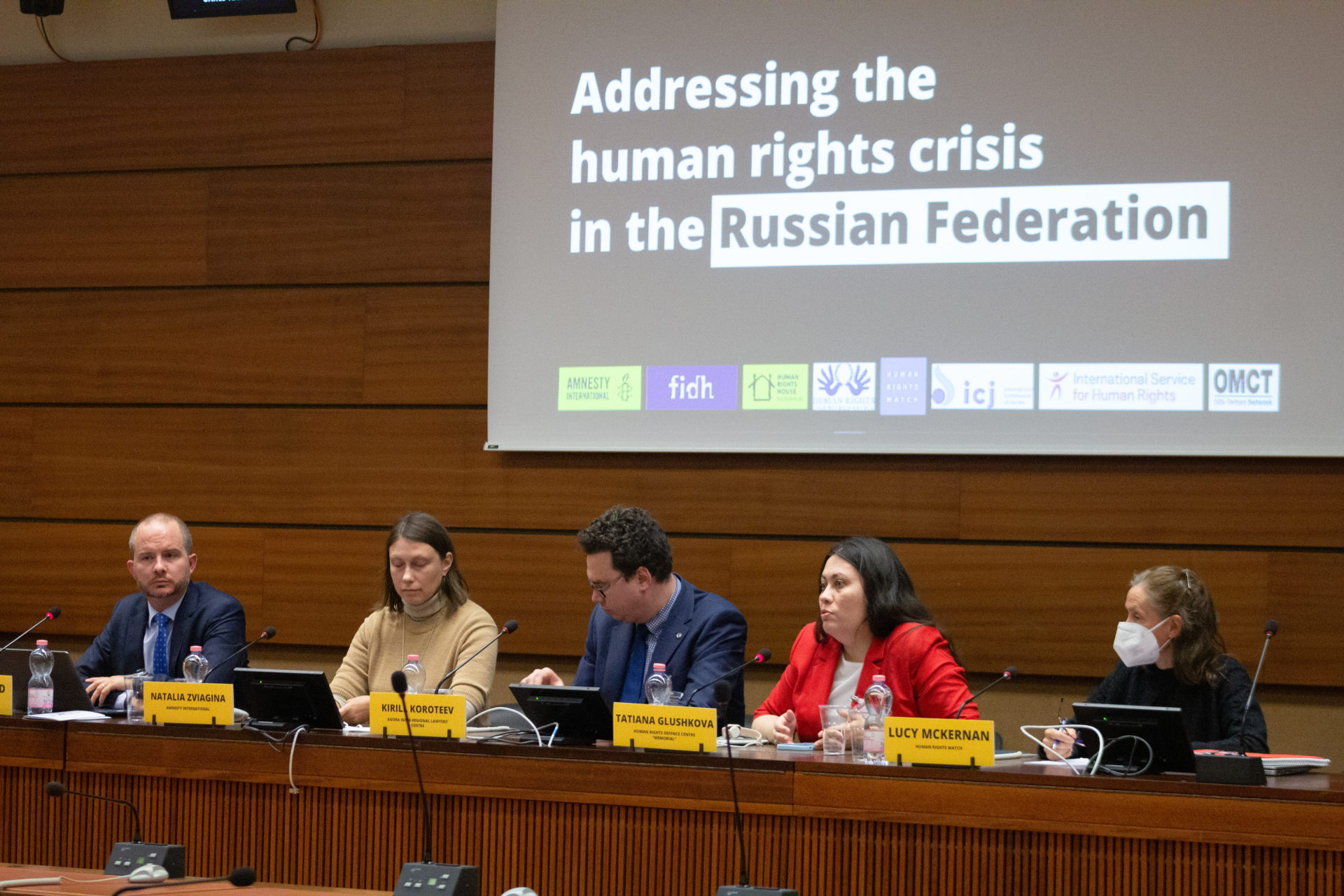 HRC51 Side Event: Addressing the human rights crisis in the Russian Federation

On 22 September 2022, Human Rights House Foundation co-organsed a side event on the human rights situation in Russia at the 51st session of the UN Human Rights Council alongside other human rights organisations.

Photographs from this event can be downloaded here.

For decades within its own borders, Russian authorities have undermined and attacked independent civil society, persecuted human rights defenders, activists, lawyers, and opposition and dissenting voices, banned independent media, silenced journalists, and have effectively outlawed any form of peaceful protest. It has never been more dangerous to be a human rights defender in contemporary Russia. This environment, at least in part, enabled the Russian authorities to launch a renewed invasion of Ukraine on 24 February 2022.  At the same time as the danger has increased, protections have decreased. The judiciary is not independent and cannot provide effective protection for human rights. This month, people in Russia cease to be protected by the European Convention on Human Rights. At the same time, Russia continues its attempts to undermine UN human rights mechanisms, including through the promotion of misinformation and propaganda.

Authorities’ failure to address domestic violence leads to tragic outcomes for victims due to inadequate legislation, poor police response, and insufficient services. Racial profiling in law enforcement remains a significant problem. Ethnic minorities such as Chechens and Roma, and migrant workers from Central Asia are routinely subjected to police round ups, extortions, and degrading treatment. There is no independent mechanism for civil society to effectively file complaints on grounds of racial discrimination. Authorities prevent indigenous rights activists from carrying out their work with smear campaigns and personal intimidation.

Since HRC50, Russia has marked several sad milestones in its domestic human rights crisis. Authorities have expanded their “foreign agents” designations, designed to stigmatise, demonise, and ultimately silence domestic civil society. Efforts continue to shutdown Independent media and journalists, including Novaya Gazeta. The number of opposition figures in jail is growing, while more than 16,000 individuals have been arrested in protests since February 24.

Against this backdrop, Russian and international civil society organisations and human rights defenders have renewed their pleas to the Human Rights Council to establish a Special Rapporteur on Russia.

This in-person side event at the 51st session allows for an opportunity to discuss Council action to respond to Russia’s human rights crisis and to the legitimate calls for support from domestic civil society. The panel will focus on the following key questions: