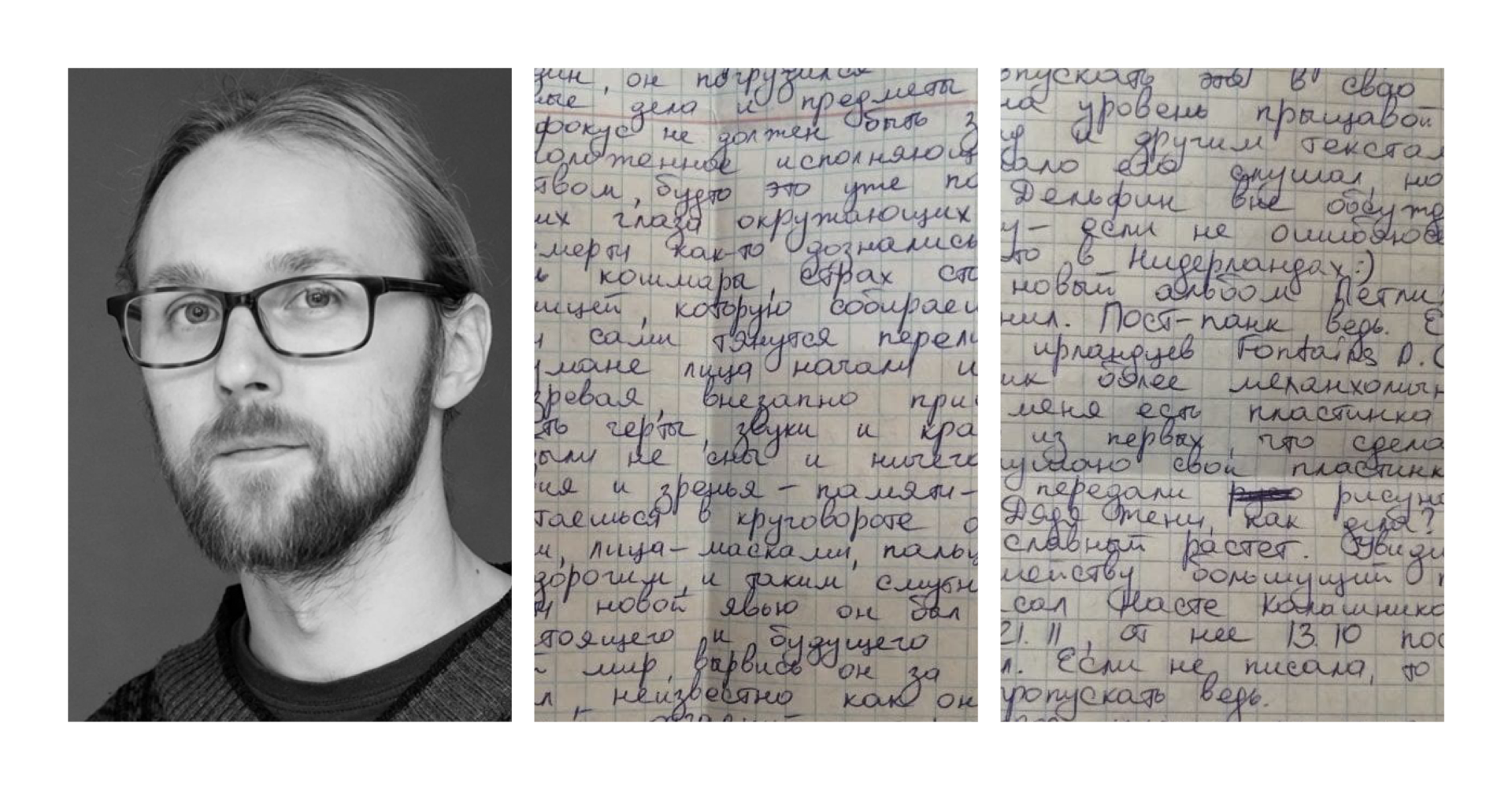 Yauheni Rubashko, known to his friends as “Zhenya”, was detained in Minsk on 29 July 2021. His apartment was searched and he was beaten at the time. He was subsequently transferred to the pre-trial detention centre and charged with “group actions grossly violating public order”. Yauheni is one of three anarchists, together with Aliaksandar Bialou and Artyom Salavey, who are accused of participating in the “extremist formation” Pramen, a well-known anarchist group in Belarus. They are facing up to six years in prison.

The letter below is from Yauheni to his friend Masha. He tries to calculate how much his prison sentence can be reduced by based on how long he has already spent in the pre-trial detention centre. One day spent in a pre-trial detention centre is equivalent to one day in a strict regime colony, one and a half days in a general regime colony, and two days in an open penal colony, also known as a “khimiya“. His distrust of the justice system is evidenced by his mention of the “court”.

Yauheni adapts Jorge Luis Borges’ poem so it rhymes in Russian, although the rhyme does not survive the English translation. Among others, he refers to French author, Michel Houellebecq and British author and psychotherapist Philippa Perry.

Yauheni mentions several bands and singers in his letter, as Masha has sent him texts of lyrics. Evgeny Alekhin is the lead singer of Russian hip-hop/indie band “Night Loaders”. Oxy (Oxxxymiron), Husky, and Dolphin are all well-known Russian hip-hop artists. “All the games” is likely a reference to the lyrics of Oxy’s song “Who Killed Mark?”, which was widely discussed after its release in November. Yauheni tells Masha that he also knows about the “Loop album”, a reference to the Belarusian post-punk band Loop of Addiction’s album “Wrong Person”, which came out in October 2021. Finally, he refers to Irish band Fontaines D.C.

Yauheni mentions that the rules for subscribing to periodicals changed recently. Previously anyone could subscribe to a newspaper or magazine on behalf of a prisoner, but the head of the detention centre changed the rule in November. Now prisoners (with the assistance of prison officers) can only subscribe to publications at their own expense. The list of publications to which prisoners are allowed to subscribe has also been reduced. All independent newspapers and magazines were previously removed from the list, but since December all Russian publications were removed too. Now Yauheni can only subscribe to the Belarusian magazines “Mastatstva” and “Dziejaslou”.

Today is Tuesday 23.11. I received your letter, which you wrote on 10.11, on 17.11. I previously wrote letters to you on 10.10 and 14.10, and I also sent you a postcard with gratitude for the 20 rubles! Nearly one and a half months have passed since then. I was trying to get some medical treatment in my basement cell, but now it’s been nearly 4 weeks since I moved upstairs to cell 69. You’ll see that from the address on the envelope as well 😉 There are even more people here, but there’s also more space, you can even (!) walk back and forth, and the air here is good. No more than two people smoke here at the same time and at night we agreed not to smoke. One guy who has been hanging out here for a long time knows the rules of everyday life: how to behave, how to share, how to clean (hehe :). This organises the forced cohabitation of 13 men. Overall, the impact is positive. There is a lot of collectivism, which is good. I was very sick, and in the end I got antibiotics from the paramedic. I took them for a week and have finally recovered 🙂 I was handed a whole pharmacy of all sorts of drugs.

My fourth month of captivity is coming to an end. I’m here for sure until New Year’s Eve, then we’ll see. I was tired after three months in the basement cell – it was a [difficult] time psychologically. This fourth month, especially after the move [upstairs], passed differently. And it’s already equal to six months of the penal colony or eight months of khimiya after the verdict of the “court”. The more people, the tighter the group dynamic. But people are good, they try to support each other, cheer each other up and not get discouraged. Although when half the prison building faces sentences on drug charges, then it’s easy to find reasons to be depressed. My empathy sometimes makes it hard to stay positive because of the guys’ 10-20 year prison sentences. That’s a tough one, of course.

After the agony, already alone, he sank into sleep.

In the morning, the familiar things and things awaited him.

On the night that had passed the focus should not be sharpened.

In the service of a tolerable duty.

With a tedious feeling as if it had already been repeated,

He noticed the averting eyes of those around him

Perhaps his death had somehow been discovered?

With darkness the nightmares began, the fear began to grow:

Between him and the page you’re about to write,

The book that one’s hands are drawn to flip through.

The letters swarmed. In the fog, faces began to disappear.

Unsuspecting what the matter was, suddenly came the epiphany.

Unable to remember the features, the sounds and colors of dreams

He realised that they were not dreams and that none of this happened.

On the other side of silence and sight and memory was reality.

And after death you flounder in a whirlwind of incoherent images.

Voices were echoes, faces were masks, fingers were mirages

So familiar and dear, and so vague and disembodied.

On the other side of memory he was struck by a new reality.

Without past, present or future

A new world would reveal itself to him, if he broke out of it.

That world encircled him, who knows how he felt it

Through a series of agonies, despairs and orphanages he wanted

His wanderings were monstrous, Beyond all his former feelings and hopes.

Terror itself opened up before him, in all its splendor and unprecedentedness.

And then he knew that he had been forgiven.

And all the while he was in paradise.

“His end and his beginning”

It’s basically just a rhyming retelling of a page of text. It really just came to me, and out of nothing to do, I put it into this form 😉 Earlier I also read his collection Of Heaven and Hell. My book now includes The Book of Sand, The Book of Imaginary Beings, and The Creator. Borges is cool, but very erudite, and his essays are often full of references to texts I haven’t read. But all the magic is just a thrill.

I read Houellebecq’s The World as a Supermarket, by the way. It’s mostly essays, reviews. I like how and what he writes about. I realised, for example, why [Evgeny] Alekhin from “Night Loaders” loved him :). It would be good to read his novels and poems. I’ll read them later :). I found out that you can send books by regular mail without affecting the transmission limit. I could get books in prison.

I also read Goethe’s poems and [his novel] The Sorrows of Young Werther. I wasn’t in the mood for Faust and I decided to postpone it, so as not to spoil the impression. The Sorrows of Young Werther was previously banned, by the way, after a series of suicides among young people in Europe. Werther is a sensitive guy in love with an engaged girl. The ending is already clear. Of course, I wouldn’t want to be in the girl’s shoes, but it’s fascinating to read 🙂

While I’m reading Philippa Perry’s light-hearted psychology book How to Stay Sane. I haven’t found any new ideas, but it’s good to read here, to get my thoughts/feelings toned down a bit. Although it’s cool to read about close warm relationships with people, of course the prison looks at me and silently chuckles 😛

Nietzsche and Machiavelli are still on the shelf. Haven’t gotten to them yet. At home I wouldn’t have gotten around to reading them, but here – as a study of classics 🙂 And tomorrow, the day after tomorrow there will be a new tranche of books!

Thank you so much for the lyrics! I have four pages of songs and two letters behind them. I know about the Oxy track already by the way. And yes, all the games, of course. Here too, the level of feminism is not high to say the least. I can’t even talk about a lot of topics here. I just try not to let it into my soul as much as possible, not to roll back to the level of my pimply school days. I would be very happy with other [lyric] texts as well! Husky is cool, I haven’t listened to him much, but he’s very original (Dolphin is out of discussion 😉

About the sticker – if I’m not mistaken, it’s of The Hague. Or definitely somewhere in the Netherlands 🙂

I know about the new Loop album! Would love to check it out. It’s post-punk after all. If you haven’t listened to them, check out the Irish band Fontaines D.C., the second full-length is more melancholic, the first is upbeat. I have the vinyl of the second one 😉 One of the first things I’ll do after I’ve done my time is listen to my records 😀

To your question about whether I need something: not really – what I need is already here, and what is not, then I do not miss :). Since November the rules for subscribing to periodicals have changed: now we must write the application ourselves, and pay with money from [our own] accounts. But then it turned out that we can’t subscribe to Russian periodicals. So there is not much else to do, the issue is solved. For me, I am left with “Mastatstva” and “Dziejaslou”. That’s how it is.