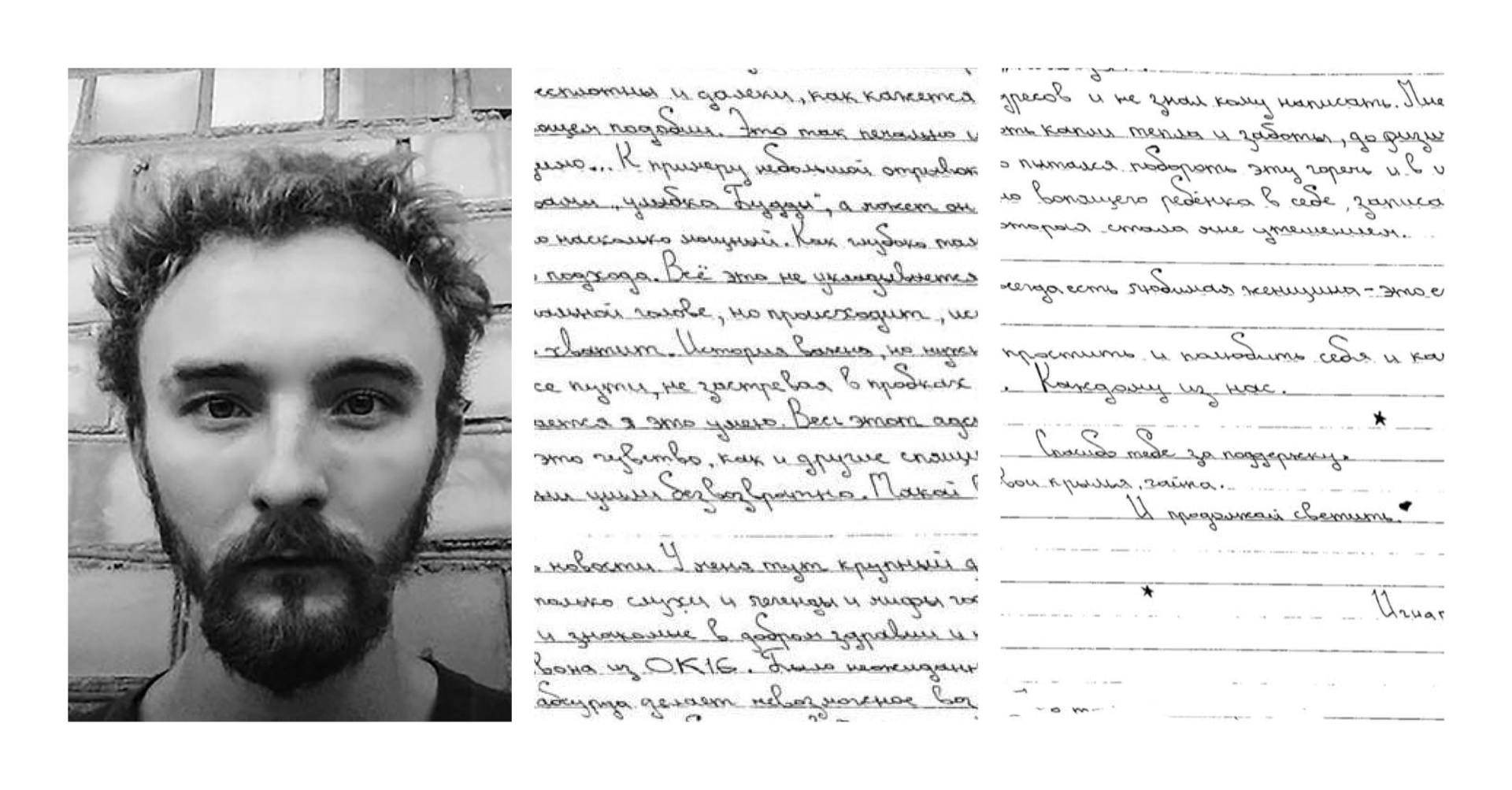 Ihnat Sidorchyk is a film director, actor and poet. He was detained on 10 August 2020 and initially charged with “organisation of mass riots” for having called on friends to meet in central Minsk on 9 August (the day of the presidential election) via a Telegram chat. In February 2021, Ihnat was sentenced to three years of restricted freedom in an open penitentiary (so-called “khimiya”), finding him guilty of “group actions that grossly violate public order”. Ihnat was released to await an appeal hearing, but he was re-arrested in June 2021 to begin serving his sentence.

The following two letters, from September and November 2020, were specifically chosen for publication by Ihnat, as he says they are those most dear to him. He has requested that the letter’s addressee, who he refers to as “Seagull”, remain anonymous.

It is not clear who Ihnat is referring to when he mentions “Seryozha” in his first letter, and what significance his birthday has. It is also unclear where the final quote of his letter is taken from. “Earth, Earth, I am Jupiter…” is likely a reference to the song, Moscow – Moon – Jupiter, by the Russian neo-retro group Salyut. Ihnat uses irony and metaphor in his letter, when refers to the prison as a “resort” filled with “unbridled fun”, and by saying that they will “turn the ropes into strings” when he and Seagull meet.

In his second letter, Ihnat refers to a story in chapter 54 of Alexander Solzhenitsyn’s In the First Circle, which is known as “The Smile of the Buddha.” The story is essentially about the Soviet Union’s ability to hide their human rights abuses from the West. Ihnat refers to having seen Levon Khalatrian, whose letter has previously been published here, in the khimiya. Yahor is Ihnat’s cousin, who died in a car accident more than a decade ago. Ihnat’s “first time in Žodzina” is a reference to when he was first detained and held in pre-trial detention.

The perennial ‘scents’ of damp, tobacco, men’s not-so-fresh bodies and sewage have been ingrained in the walls here, but [your letter is] a breath of spacious and life-filled air. The windows here have “eyelashes” (solid bars) and I can only see thin lines of sky and fragments of the surrounding buildings. And that smell widens the slits a little, thank you. I often dream of you, we play pool, work together in some cultural centre, sketching and taking awesome pictures of some unimaginable tropics.

If it wasn’t for the books, I’d go cuckoo. There’s absolutely nothing to do here. I try to take mental images of some of the sketches and the details of my surroundings [in my dreams], but a real camera is sorely lacking. It’s a different world. Sometimes I wake up and I don’t immediately know where I am.

You could call it a place where time stands still. That’s the meaning of punishment. People are tortured by time. What happens subsequently turns into Groundhog Day and you feel like a boy forgotten in a park on a Ferris wheel. No people, no technicians, just the monotonous revolutions of your stall.

Sometimes the radio comes on. I have never enjoyed [the Russian pop singers] Polina Gagarina, [Dima] Bilan, [Valeriy] Meladze and the like so much… I hear scraps of news. Once a week they bring us the newspaper “Belarus Segodnya”, a state-run publication set up by the presidential administration.

My lawyer tells me the gist of what’s happening, and the situation is not very comforting. The longer people go out on the streets in their thousands, the longer I and people like me will be stuck in this hole. I hope everything settles down and works out in the best possible way. I certainly hope so.

The books in the local library don’t have much colourful variety, mostly tabloid reads, passing detective stories and the like, with a few exceptions. I loved Dostoevsky’s Dream of a Ridiculous Man. I find the story very relatable, very “mine”. Try [reading] it!

I was also thinking how suavely and – as if unintentionally – the Universe or chance had thrust me into this place on Seryozha‘s birthday. Three years later. Coincidence? Who knows? 🙂

Going for a walk here is like being a wild animal. It’s basically the same “hut” (cell), just without a ceiling and bunk beds, [instead there’s] one bench. The size of the yard is about two by five meters. Overhead, the sky in the squares of the bobbinet netting. The figure of the prison guard flickers. Imagine a tiger in a cage at the zoo, pacing from wall to wall. It is the same here. So for two hours. Unbridled fun!

I want to talk to you about personal and private matters. To take the opportunity to put an end to unfinished business and turn the ropes into strings when we meet. Hopefully it will be sooner than five years from now. The resort here is obviously stunning, but I wish [I could get out] sooner. We’ll have some wine, create a cosy atmosphere, put on our favourite music, and have a chat. I’m sure we will. I really believe it. Right? There are lots of stories, but they’re all secret, I’ll save them for better times.

Thank you for writing. Every letter is a breath of fresh air, which is sorely lacking here. Whether it’s a story, an observation, a stream of consciousness or just a couple of lines, a few sentences, it all helps immensely.

With warmth and gratitude, I remember our [time together] as quiet, subtle and happy…

“Be brave on the path of struggle, don’t lose the penetrating experience of peace.”

Warm greetings to all.

Breathing in your letter and sending a firm hug to you.

For about a week straight a cellmate read Solzhenitsyn aloud to us before going to bed. In the First Circle. It was unbelievable. Goosebumps. What a tremendous job this great man did. Alongside everything else, this book (or rather a specific chapter) has changed my worldview forever. It opened my eyes to the fact that the dark ghosts of the past are not as intangible and distant as they seem. History repeats itself with horrifying resemblance. It’s so sad and hard, but understanding it is essential…

For example, a short passage from In the First Circle with the key words “Buddha’s smile”, or maybe that’s what it’s called. It’s quite short, but so powerful. How deeply the very essence of Stalin’s approach is outlined there. All this doesn’t occur, shouldn’t occur to a normal person, but it happens, destroying dreams and hopes… but enough. History is important, but you have to concentrate on the journey without getting stuck in traffic. And believe, believe, believe. Turns out I can do that. This whole inferno has enabled me to rediscover this feeling [of belief], as well as other dormant reserves. Even though I thought they were gone for good. It’s a little stream in the desert.

You shouldn’t talk [to me] about the news. I’ve got a major deficit in that regard. We only hear rumours, legends and myths from the state channels. I hope that all my friends and acquaintances are well and free. I caught a glimpse of Levon [Khalatrian] from OK16. It was unexpected and strange. Although… the degree of absurdity makes the impossible possible.

Today it’s been exactly 12 years since Yahor passed away, and I think about [him] all day long. About his playful, radiant and free view of the world. About his bright soul that has helped me so much to this day. That’s something only someone who loves can remember.

You know, the first time in Žodzina I felt so lonely. I couldn’t sleep feeling sorry for myself and my fate, asking only “Why?”, “Why me?”. I didn’t know who to write to and I didn’t know their addresses. I missed the warmth and care more than ever, to the point of physical pain in my chest. I tried for a long time to overcome this bitterness and finally shut up the screaming child in me by putting down on paper a thought that became a consolation.

How difficult it is to forgive and love yourself, and how necessary it is. For each and every one of us.

Thank you for your support. Take care of your wings, Seagull. And keep shining.