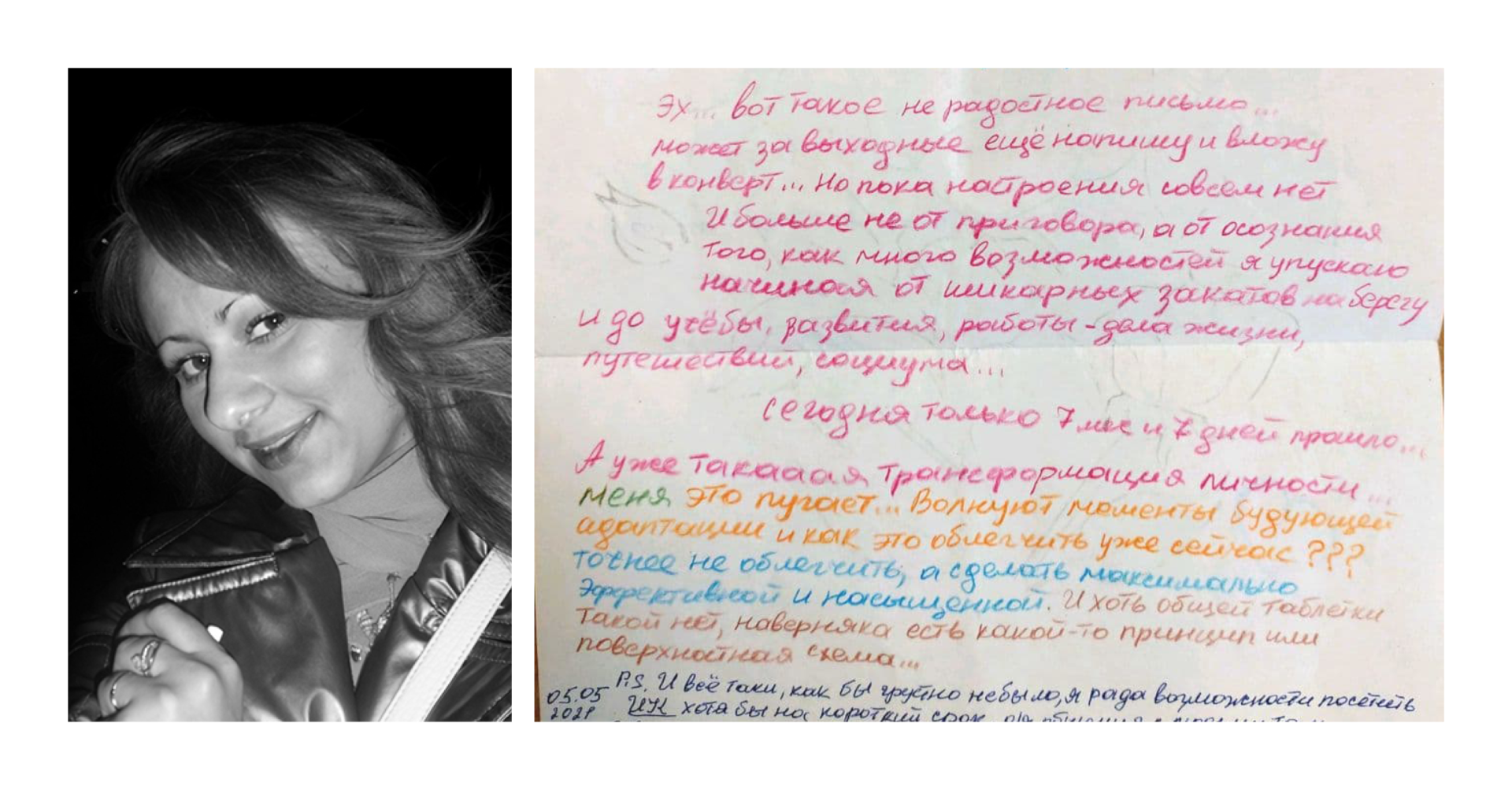 Hanna Vishniak is a volunteer with Telegram channel “Drivers-97”. The channel, which has 5,000 subscribers, was initially set up to facilitate communication that would help bring people and resources where they were needed. Hanna was detained on 28 October 2020 and held in pre-trial detention in Minsk. On 4 June 2021, she was convicted of “organising and preparing activities that grossly violate public order” and sentenced to 2.5 years in prison. She was then taken to a “correctional colony” in Gomel in south-eastern Belarus.

Below are two letters from Hanna to her pen pal, Elena. Hanna is responding to questions and issues raised in Elena’s letters, so she covers a wide range of topics. In the first letter, Elena refers to the image of the pink and blue cat that she drew. It is clear, especially from her post-script which she writes the day after, that she is trying to stay positive. Her sign-off line, “we’ll touch the stars”, is likely to be a reference to the Belarusian band Akute’s song Happiness (Шчасце).

In the second letter, Hanna says she cannot write everything that she would like to – because there is so much to write, but also because her letters would be censored. She compares her cold cell to a mountain canyon, presumably to convey how narrow and cold it is. She says that the outside space she has access to is the same as her cell, just without a roof. Like Ihnat Sidorcjyk, she refers to the iron bars on the windows as “eyelashes”. It is unclear what exactly she is referring to when she says she wishes “it didn’t happen” in response to Elena’s question about the radio. It is also unclear who Chkalovsky is, but it seems that they sent her crayons, which were confiscated by the prison officers.

Her reference to “the art of saying WE” seems to be an emphasis on the need for solidarity and being considerate to others. When she refers to “the people who come here on purpose”, it is likely that she is referring to marginalised groups, for whom being in prison at least guarantees food and a roof over their heads. She signs both letters with her nickname, Anya.

I arrived after the sentence [was handed down] and drew this! I took the two year and six month sentence with pride! And a smile! It was expected!

And so… eight hours passed and… Well, anyway, the sedatives began to let up. And it started to sink in… it wasn’t a dream… I really do feel like…two years and six months. Correctional. General population colony…

Uh… This is not a happy letter… Maybe over the weekend I’ll write something more and put it in the envelope… But I’m not in the mood yet. Not just because of the sentence, but from realising how many opportunities I’m missing out on: gorgeous sunsets on the beach, studies, development, work, life, travel, society…

Today, it’s only been seven months and seven days [since my detention]…

And already such a transformation of [my] personality… It scares me… I am worried about how I will adapt and how to facilitate it now??? Or rather not to facilitate, but to make it as effective and fulfilling as possible. And although there is no magic pill, there must be some guiding principles…

P.S. Still, as sad as it is, I’m glad to be able to [be here], at least for a short time, to talk to the people in here. I’m sure it will be an interesting experience for me, sociologically and in order to appreciate the simple things!

I just received your letter and am writing a reply at once, even though [I must wait for the] whole weekend before I can send it!!! I prefer to answer immediately, to convey the energy and joy from the received letter! Any letter, card, parcel here is what I/we live for! It doesn’t matter what’s written or how much, it can be any little thing – just to lift the spirits!

And your letters are awesome in my info-vacuum 🙂 Thanks for the update! I understand everything that’s going on, and if I may say so, sometimes much more… There’s a life of its own here too! And all the things I would like to tell you in a letter would not fit. Neither will everything from your side! ❤

Fortunately, I often see the lawyer and manage to keep abreast of everything, not “online” but still!

It’s not easy to write about everyday life, given the censorship… and I don’t mean of obscenities… I’ll try. I used to love camping in the woods in tents. When you sleep in nature with three layers of clothing and a sleeping bag. I’d give a lot to have that thrill now…! Ah stop… I have nothing [to give] 🙂 Anyway, the experience of camping has come in handy for me. For example, I sleep under a blanket at night, tucking the ends and edges under the mattress – creating a “cocoon” or a kind of sleeping bag to keep warm and hide from the draught and from a lamp that stabs me in the eyes with light.

The main thing is not to lean against icy walls – [the cell is] like a mountain canyon, it’s stuffy in the small room. One night I pressed my back against a rock and voilà – I’ve been coughing for the third week straight, but that’s okay, I’m almost over it, it’s my own fault 🙂

You really miss the open spaces when you can stare into the distance… Not to mention the beauty, greenery, sunsets, etc. that you see in the wild, but back then it was commonplace…

This is the principle of “limitation”, the range of my gaze is three metres. Fortunately for me, my cell is on the [south] side, and daylight shines through the “eyelashes” of the iron bars. And sometimes you can see the sun’s rays – through the stripes of bars they create on the wall like stripes of guitar strings, you can move them with your fingers in a very funny way – it’s like the shadows play on the strings 🙂 Awesome!

What’s missing is socialising and interacting with people. Most of the people here are terribly “empty”, there’s nothing to talk about, and that’s what drives me nuts … Because I communicate with people who are interesting, from whom you can get something of your intellect, develop your horizons, I guess that’s why every visit from the lawyer is like a breath of air for me and an opportunity to spend at least an hour talking to a human being who is fulfilled! Someone who is terribly interesting, as it seems to me here, any person of free will is a treasure trove of lively thoughts, and for me even a little communication helps me feel like a human being! The appeal – yes, I’m writing it, it’s likely to be a new trial.

I used to read [William Somerset] Maugham, [Haruki] Murakami and other serious books, then the classics, and now I’m asking the library for an explanatory dictionary and a spelling dictionary 🙂 My brain is being purged, and cannot remember the words of my favourite songs, poems, or even the names of my favourite actors…

Well, no, I don’t read in the Belarusian language, as there’s nothing, though I speak it perfectly – I like to hear and communicate. But not to write … Here I met girls who are trying to speak to each other in Belarusian, but it comes out very prim and Russian-sounding, and the clucking and sucking makes it sound arrogant or pretentious. In short, it stings. I hope these girls – by the way, incredibly interesting, with developed thinking – will go home on appeal and, of course, correct their pronunciation and enrich their vocabulary.

Your question about the radio – oh, I wish it hadn’t happened. And just then they brought a parcel from Chkalovsky, hehe, funny! The 24 wax crayons were taken away to the warehouse. Disappointing, it’s great to colour with them, they get a glossy surface 🙂

As for food, well, I don’t eat the food here at all… I eat my parents’ food. Cereals: rice, oatmeal, buckwheat; mashed potatoes; nuts; dried fruits. Shawarma and burgers (sausage, cheese, pastrami, tomatoes, cucumbers, herbs). Of all the goodies, I am most happy with fresh pastries, especially “sochnik” – with its [cottage cheese] stuffing 🙂

Since 1 April we have boiled eggs on Tuesdays and Thursday mornings. Previously, we had porridge with milk but now it’s with water and flour – it is nourishing but I don’t eat it. It’s rice porridge on Thursday mornings – I do [eat it] now. I’m addicted to chocolate, coffee and other sweets. Although I used not eat any sweets at all, now, apparently, in the absence of dairy, protein, and vitamin D, the body replaces them with sweets. No, I haven’t gained weight, all my 50 kg are still there. Only my body has, of course, lost muscle mass. I do sports and yoga. Walking in the fresh air is the same as the canyon [cell], but with an open top. And since there’s not much space, we take turns exercising: one day one girl does squats, push-ups, etc., another day someone else does.

Well… 🙁 It was not fun, but you get used to everything, I take it with humour. I don’t get depressed at all. On the contrary, it’s a great experience! To develop thinking and listen to your own thoughts. It’s not boring to be by yourself, it’s even more interesting to be alone with yourself! And experiencing such solitude needs practice from time to time 🙂

I don’t go on “diets” anymore – they wash calcium out of the body, and taking vitamin tablets is useless in the absence of sunshine and natural vitamin D.

In a much greater sense, I understand and practise “the art of saying WE” – not just talking but doing… now I’ll explain. There are people […] who occupy the entire space, which is very uncomfortable for others in this environment, 24/7 the same faces in a confined space. It is important to be invisible to others so as not to disturb. I have studied sociology of influences and psychology, so it hasn’t been difficult for me to put it into practice and to explain it to others who are self-aware. But I had one little trip to the rooms here, and those in neighbouring ones don’t really listen to each other or try to be understanding… as if… Anyway, I mean the people who come here on purpose like in a hostel 🙂 Well, maybe I’ll write later, if this letter reaches you, Elena. I wrote down the [tracking] number on the red [first class] envelope just in case…

I will be very glad to receive a colouring book of Disney characters: Little Mermaid, Rapunzel, Cinderella, Mickey Mouse or something else. 🙂

Thanks for the Wings of Support!