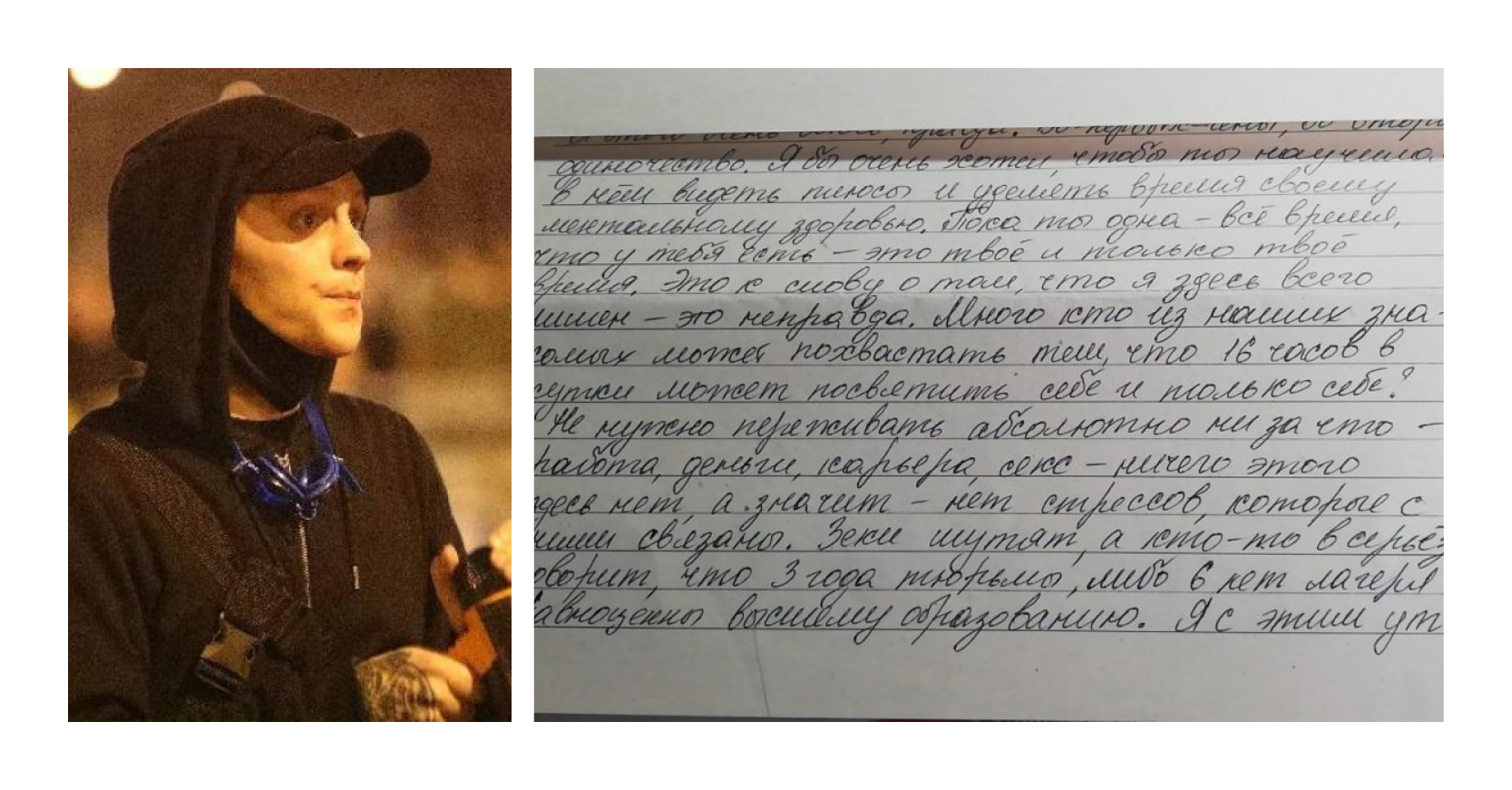 Dzmitry Kubarau is UI/UX designer from Minsk. Known as ‘Dima’ to his friends, he likes tattoos, fashion, and chess. Dzmitry was accused of “calling people to actively participate in mass riots, organising them himself and participating in them” from 9 to 12 August 2020. He was detained on 11 August 2020 and taken to the KGB pre-trial detention centre. That same night, he signed a confession while in the hands of the KGB. At trial, Dzmitry pleaded not guilty and reported the torture that led to his ‘confession.’ On 24 March 2021 he was sentenced to seven years in a penal colony under part 1 of Art. 293 of the Criminal Code (“Organisation of riots”).

On 27 September 2021, a verdict was passed in a new case initiated against Dzmitry. This time he was sentenced to three years in prison for allegedly keeping substances to prepare Molotov cocktails in an apartment. He is serving eight years in a penal colony for the two convictions.

In this letter to his mother you see a son putting on a brave face, encouraging his mother to not dwell on the negatives of his situation. He even spins detention: To be alone is to have total dominion over yourself and reading the letter you get the sense this is advice both for his parent and himself. Dzmitry presents prison as a place free from sources of stress such as “work, money, career, sex” but also a place of reconfigured social codes, illuminated by the survival skill of identifying those who will support or ‘fink’ on him during his prison sentence. While detention has given him an opportunity for ‘respite’ and a chance for him to take stock of his situation and his plans for the future, the mundane realities of detention leak through, down to what can be sent to him and what he is requesting to make the best of out the current situation, whether this is incense or books.

Letter: I would really like you [his mother] to learn to see pros and cons in it [he is referring to the current situation, that of his mother’s son being detained] and devote time to your mental health. While you are alone, all the time that you have is yours, and this is your time only. By the way, regarding [the fact] that I am “deprived of everything” here: this is not true. How many of our acquaintances may boast that they can devote 16 hours a day to themselves and only to themselves? There is absolutely nothing to worry about anything here; work, money, career, sex: none of this is here, which means that there is no stress associated with those things. Inmates say this as a joke, but some of them seriously say that three years in prison or six years in the colony are equivalent to higher education. I fully agree with this statement. Yes, and you start seeing things in people. This is a vital survival skill here. Who will fink, and who, on the contrary, will help; to whom to say “no”, and to whom to say “yes”, and so on.

The only thing that confuses me is that all of us will have to get to know each other again, but this will not happen soon, and this also makes me happy. 🙂 I still have a lot to understand in addition to the tons of things that I have already realised. 🙂 I very often find myself thinking that I am happy, because I have what I wanted; I have been asking my life for a respite for so long, because I did not know where I was going, with whom and for what. Now, I have a life partner that I have never dreamed of. Moreover, I don’t understand how it happened. Here, I got the very respite that I dreamed of. It remains only to understand where I am going and what is needed for this. In addition, emotions have started to emerge. I don’t even know how to describe the importance of this for me personally, but the feeling is that I am finally completing my puzzle.

“People have not changed in 300 years, only the housing challenge has spoiled them.” Bulgakov wrote this if I’m not mistaken [this is an approximation of a quote from chapter 12 of Bulgakov’s satirical classic, The Master and Margarita]. When you are only busy looking for a piece of bread, you are unlikely to keep track of whether your armour of morality shines. Most likely, you will sell it at the nearest pawn shop to eat. And what will the neighbours in animal skins say? We have a cult: “Do you have to take charge of everything?” That’s how we live: skins rule the ball. 🙂

Envelopes can contain any stationery, shaving sticks, and other trifles. There is a small request: please post me incense when I leave for prison. I’ve started meditating: I would love to try meditating with the incense. In addition, please post me an eraser in the form of a pencil and white pens (ballpoint refills). And glossy paper + felt-tip pens for drawing. It should be sold in Minsk, on Nemiga, 3; the store is in the basement. A mathematical compass + a sheet of transparent paper lined into cells. There is no hurry to post these things, but it would be nice having them by the time when I’m moved to prison. The “Selfish Gene” book [this is referring to a 1976 book authored by Richard Dawkins, which builds on Darwin’s theory of evolution to explore how genes are passed on through evolution and that this lineage is prioritised as species evolve]. That’s all for now 🙂