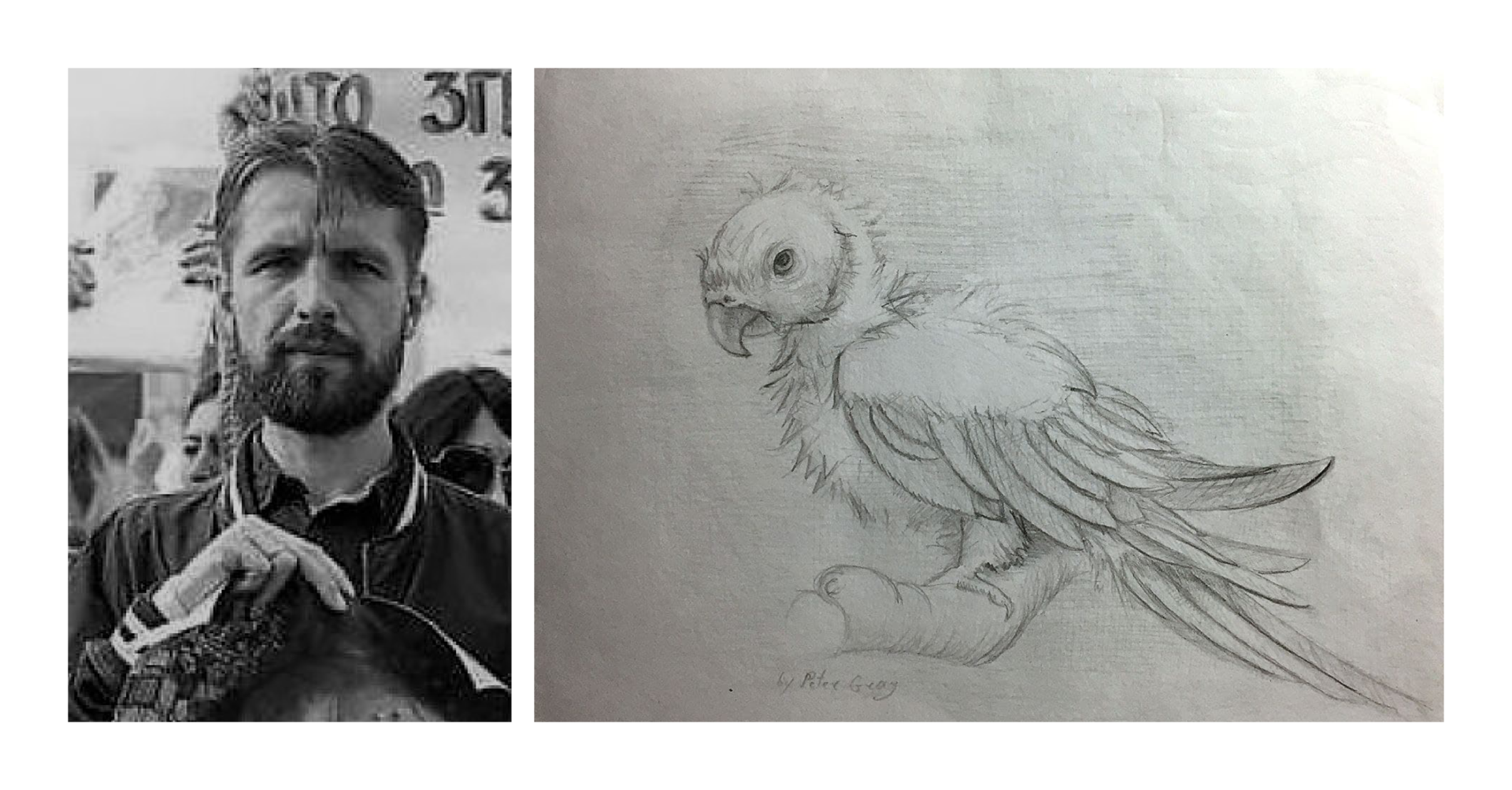 It was Danila’s 30th birthday on 27 September 2021. In a Facebook post, his mother Ludmila Gromyko said: “30 years old. Prisoner of conscience. I won’t comment. I’m rereading the letters. I want so much to hear his voice.” Below are extracts from Danila’s letters to his mother, that were sent between June and September 2021.

Danila’s letters are poetic and have many literary references, including to mythological creatures like the Hydra, the orc, and the Chimera. He refers to Belarusian poet, translator, essayist, and former vice-president of the Belarus PEN Centre, Ales Ryazanov, who died in August 2021, and to Vladimir Dubovka (c.1900-1976), a Belarusian poet, writer, linguist, and translator, who was a political prisoner in the Soviet Union.

He also refers to Nasha Niva, Belarus’ oldest weekly newspaper, which was founded in 1906 and re-established in 1991. He says that in 1911 Nasha Niva’s editor met the Belarusian poet and playwright Yakub Kolas (1882-1956) in prison. According to Danila, the editor amused Kolas, as well as the prison wardens. In exchange, Kolas gave him excerpts from two of his poems. Both of them were detained in Piszczałowski Castle (also known as the Minsk Prison Castle) at the time. Nowadays Piszczałowski Castle is also where Belarus’ death row prisoners are housed and executed.

I am very glad to receive your letter. The last news from summer. The depressing picture of the great land […] has become incomprehensible to me again. Glad to share a smile with everyone. Inevitably we’ll see each other soon – in IK-17 or on the outside. I’ve learned to believe in the inevitability of everything that is not subject to the logic of nature. But I’m convinced there’s a good chance. We’ll talk about everything there. Tell me about the smell of the thyme.

I’ve found a surprising peace in myself. I’m amazed at how much can be achieved by kindness and politeness, even if it seems misplaced. If one stays firm. Wounded in the soul: why the Blessed One’s verse “I do not bite the dead for parting” stung the heart of a murderous public, but proved utterly indifferent to “colleagues”. No one cares about [Ales] Ryazanov’s death.

It’s just under two weeks until the trial. A couple of weeks more and finally this uncertainty, which has been haunting me for more than half a year, will be gone. It’s like sitting in total darkness in a locked cage. And you try to guess where your first step will take you when it opens. When I got to [the prison in] Mogilev, I thought everything was over. And I perceived my sentence with amazing clarity. But then I heard these rumours [that we could all be pardoned]. That’s all – you don’t believe it, but you wait. Everything that happens only fuels [the rumours]. And no one comes forward to dispel them. The idea [of being pardoned] is surprisingly coherent in its logic. And even my intuition – which has always bailed me out in such moments and situations – is either silent or tells me to get ready for something good. It was to be a delightful failure that would end up hitting the spirit. Especially those who have not had time to understand that this is not 2010 [when presidential elections were also held]. Things are big. And that our timeline isn’t just scary numbers. But how can one understand such a thing?

The prison “community” is fertile ground for myths. Any grain of information, even dried out and broken, grows quickly here. It sprouts a mutant. A Hydra with the body of a kitten and the stately gaze of an orc. Laced with boredom, homesickness, and watered with blood from wounds rubbed with the shadows of empty hopes, the Chimera grows with signs of unshakable health. But like any organism grown in isolation, it has no immunity. But hiding in its native walls, it lives on all the same. It lives as a radiant fish outside of time, having lost any sense of its existence to an outsider or to reality. The Relic will retain its niche for a long time yet.

Here, splendid dawns with stunning illumination are not uncommon. This is the second one in a week. A gentle purple sky on a blanket of clouds. The air is saturated with moisture. Moisture coloured by the sun. The landscape is rendered in sepia. Mother Nature’s own stunning use of heather.

The day begins bleakly grey. The sky isn’t drizzling with rain unless it’s woken up. The clouds drift languidly beneath the drooping deciduous trees. But to be fair – the latter are resisting the gilding with confidence. Well, let it be. This summer has not brought us much joy. Hopefully it will improve. What kind of human summer is it, without a grain of healthy happiness?

The sky is bright in the morning. The purple dawn spreads over the leaden clouds. A crimson canvas on the horizon. Ripped down in a downpour. I’ve never seen anything like it.

Painted well so far. Lots of light. My eyes don’t hurt. If I go out, I’ll have to get my eyesight corrected. You should. It’s frustrating to know we’re completely broken. Life looks like a birthday cake from up here. Beautiful and refined. Absolutely no idea how to approach it. Pathetic to slice. It’s pathetic to eat. And your stomach is full of hunger and your mouth is full of saliva.

“How are you?” The editor of Nasha Niva in 1911 (or rather, much later, remembering 1911), said it was ill-advised to start a conversation with a prisoner with such a question. He said it was better to start with an anecdote. He met with Yakub Kolas [while in prison]. He amused the poet and the prison wardens. And he left with extracts from “Novaya Zyamlya” and “Symon Muzyka“. A hundred and ten years ago, the regime in Piszczałowski [Castle] was milder for many. It seems that during the last century people have become more experienced in limiting freedom. But how many iconic works of art were conceived by Belarusians in the tsarist and Soviet prisons! I wonder whether the seedlings from those years will sprout?

I read [Vladimir] Dubovka’s biography. He served 28 years in prison. Then he died in Russia. Almost forgotten, but with a loving wife by his side. He went to get some medicine. Slipped. Neck of the femur. But he invented the word “shooting star”:) And we haven’t forgotten it.

This attitude – “just do your job well, in spite of everyone” – is the height of hypocrisy. It makes me sick that I’ve been sticking to it for so long myself. And what if your job well done indirectly feeds the Taliban, for example? That is how we lived. Now we cry.