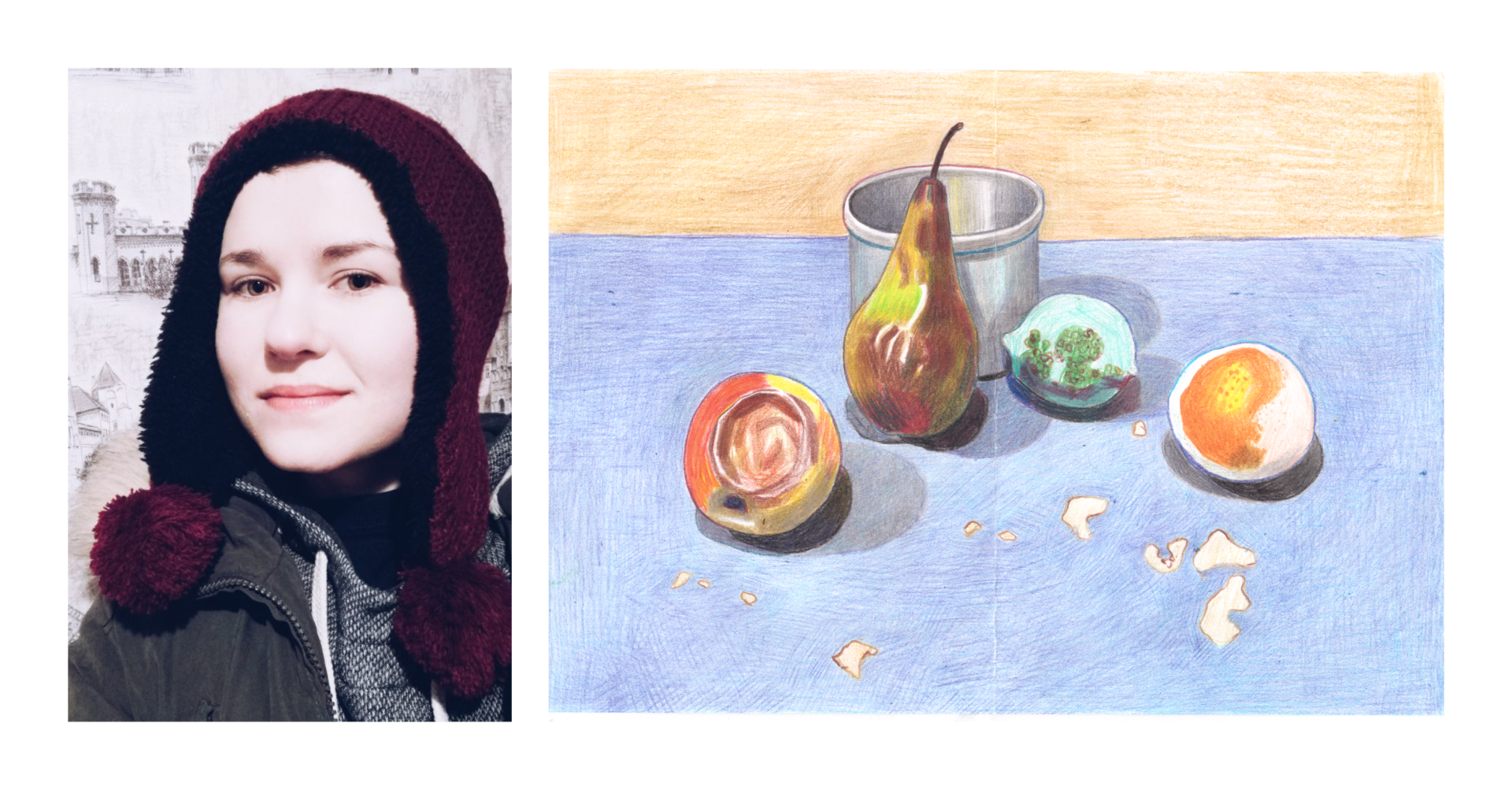 Anastasya Mirontsava is a 25-year-old student and artist. She has been behind bars since 16 October 2020, when she was detained for having participated in the protests on the day of the presidential election, 10 August 2020. At her trial on 31 March 2021, she implored the court not to deprive her of her freedom any longer.

She said: “I am guilty of trying to prevent the riot police from detaining people, but not in a gross violation of public order. I did not want to harm anyone, but only to help people who I thought were being detained for nothing.” She was subsequently sentenced to two years in prison. Anastasya’s older sister Victoria (known as Vika) was detained alongside her. She received a two and a half year sentence.

According to Viasna Human Rights Centre, Anastasya had been one of the best students in her year at the Belarusian State Academy of Arts. However, she was expelled from the academy after she failed to sit her exams due to her imprisonment.

The five letters below were sent by Anastasya to her friend Dasha between November 2020 and April 2021. In the first letter, she mentions her little kitten Archie. Before she was detained, Anastasya adopted a stray pregnant cat from the street. She found homes for most of the kittens that were born, but she kept three cats: the mother, Mukha, and two kittens Antoshka and Archie, her favourite. She also has a blind cat, Whiskey, which she adopted several years ago. Now her mother takes care of her four cats.

In the third letter, she refers to “animals” she is expecting in the post, this is a reference to a postcard with animal images. In the fourth letter, Anastasya decides against describing the view from her cell in detail for fear that the prison authorities may block another of her letters.

Anastasya’s fifth letter is written the day after she was sentenced to two years in prison. She refers to her sister Vika, who is being detained separately from her, saying that she didn’t bother removing her personal items from her cell as she was so sure she would be returning there after the trial.

Socks are so fluffy!)

Give Andrei my thanks for the postcard, it’s awesome! =)

I haven’t received your letters.

I am in good condition. I’m fine. It is hard, of course, to be constantly in the same room with so many people… But you get used to everything…

But if the girls [cell mates] are good, the atmosphere in the cell is also good of course… I have to work through the worst scenarios – it’s not fatal. I’ll get over it.

But I realised here that I didn’t appreciate life, and trivial things like fresh air and clean water. The water is disgusting here! It itches my eyebrows, and it’s impossible to just drink it!

The ability to go anywhere at any time and a hundred other little things… It seemed like I appreciated these things… I had a fucking great life and I didn’t like it. I kept whining to myself.

If I were freed now, I’d go out and have the freedom I never had before. It’s only when you lose something that you realise the value of what you’ve lost. That’s true!

At the police department, when they arrested me, they took my backpack, my jacket, and the scarf you gave me. There’s a chance I won’t get it back. They love to lose other peoples’ backpacks. It’s too bad if that’s the case… I really liked the scarf! =(

They can hold me for up to three months before the trial. I asked my mom to look for my notes, but I feel like there’s no point in studying for exams. I’m more likely to be expelled…

Well, whatever! I’ve already learned how to draw. The only thing I really regret is that Archie, my little kitty, is growing up without me… And that all this trouble has come upon my mother. It’s frustrating, too, to be dependent on others. Although I need to learn that too… To accept help and not feel like a burden.

Dash, thanks for the support! I wish I had received your letters, maybe more will come.

Give my best to everyone.

The letter that I wrote you on the 19th was returned to me today – it didn’t go through… Hope this one goes through and makes it to [you] by New Year’s Eve.

Best wishes for the coming year! =) And sending you cards. I hope you like them! Don’t let us being here, and everything else, dampen your mood! Have a fun, cozy, and buzzing new year! =)

We’ll celebrate too. We couldn’t buy cakes in the detention centre shop. But it’s okay!

Recently we went to the big yard. There was a lot of snow. The girls were delighted and began to throw snowballs at each other. The attendant was fiddling with the door (he couldn’t close it), and he got hit [with a snowball] too. But he only smiled. =)

Then everyone began to make snowmen. Except for me… I was in a rotten mood, and the only way I came in contact with snow was to sit on it with a cigarette between my teeth.

And the snowmen turned out awesome! I got a notebook and pen, and I had time to draw them. I’m sending you the drawing now [see drawing below], but it’s not the original. The original is on a piece of paper with squares, and it’s very messy.

When we were leaving, the escort officer said we had won the contest.

Lately, for almost a year, I’ve been so tired of painting! Practically everything I did was such an effort. Rarely did I ever take on something with real gusto. How could I love [what I’m doing], if I get so much suffering and no pleasure? And it turned out to be very simple! =) You have to relax sometimes. I took a couple of months break from oil painting, and now I feel the heat. It all makes sense. 🙂

I thought I hated it.

But how cool it is to be an artist after all! =)

This is the second time in my life that I’ve had this realisation – that I love being an artist! That it can’t be taken away from me. It’s me and it’s mine! It’s a cool feeling!

Before, when people asked me what I was doing, I would say that I was “kind of like an artist”, I was painting, learning… And now that “kind of” is gone.

A postcard with space aliens came for me. I think it’s a great reason to write =)

You said you already sent the animals =(… Hrm… not a single animal has arrived yet.

Now I got the seventh message from my you, number 26. It’s sad that so many [letters] are lost, but happy that at least something is coming. (=

In case you didn’t get my last letter, I started numbering again, because I’d lost track…

And the barbed wire you can see outside the window has such cool icicles! (= I love them!!!

There’s just no way to draw them…

Dasha, I miss oil painting so much. I’ve never felt like that before =). But I’ve never had such a long break from it. When I imagine not writing for a couple of years… it makes me afraid somehow….

Soon it will be spring… Flowers will bloom, leaves will sprout, grass will grow =). It will get nice and cosy. How quickly time flies!

It’s just a little crazy in my head. Honestly, I don’t expect spring or summer. It’s always the same climate here. So I’m not even bothered by the cold or frost or snow. I wouldn’t mind winter either. It’s like it doesn’t exist. Even though it’s snowing outside the window. When the sun shines, it’s so beautiful! I wish I could describe it but they’d probably block my letter again.

When I look long and hard at the icicles, on a clear sunny day, it seems as if I have never seen them before. It’s as if they are from another planet. Such bright ghosts. I’ve never looked at them that way, though.

Do not get too upset, please… I’m also a bit shocked by the judgement, of course. But I will not focus on it. It’s pretty clear how rotten the courts are.

I want to support you all! To say that everything is normal… It’s a pity that the letters can’t reach us right now. After all, it’s now that our hearts are at their lowest. All of you and my mother… Of course, it hurts! So much money spent on lawyers… Lawsuits…

The court was not interested in what the lawyers said, nor what the witnesses said, nor the indisputable facts.

Vika, by the way, didn’t even take the stuff from the cell to the storage room. There wasn’t a doubt in her mind that this would be the case. Maybe the appeal won’t make a difference. The good thing is that we have time to get it together. But in any case, they took into account the six months [I spent in pre-trial detention] and that is behind us.