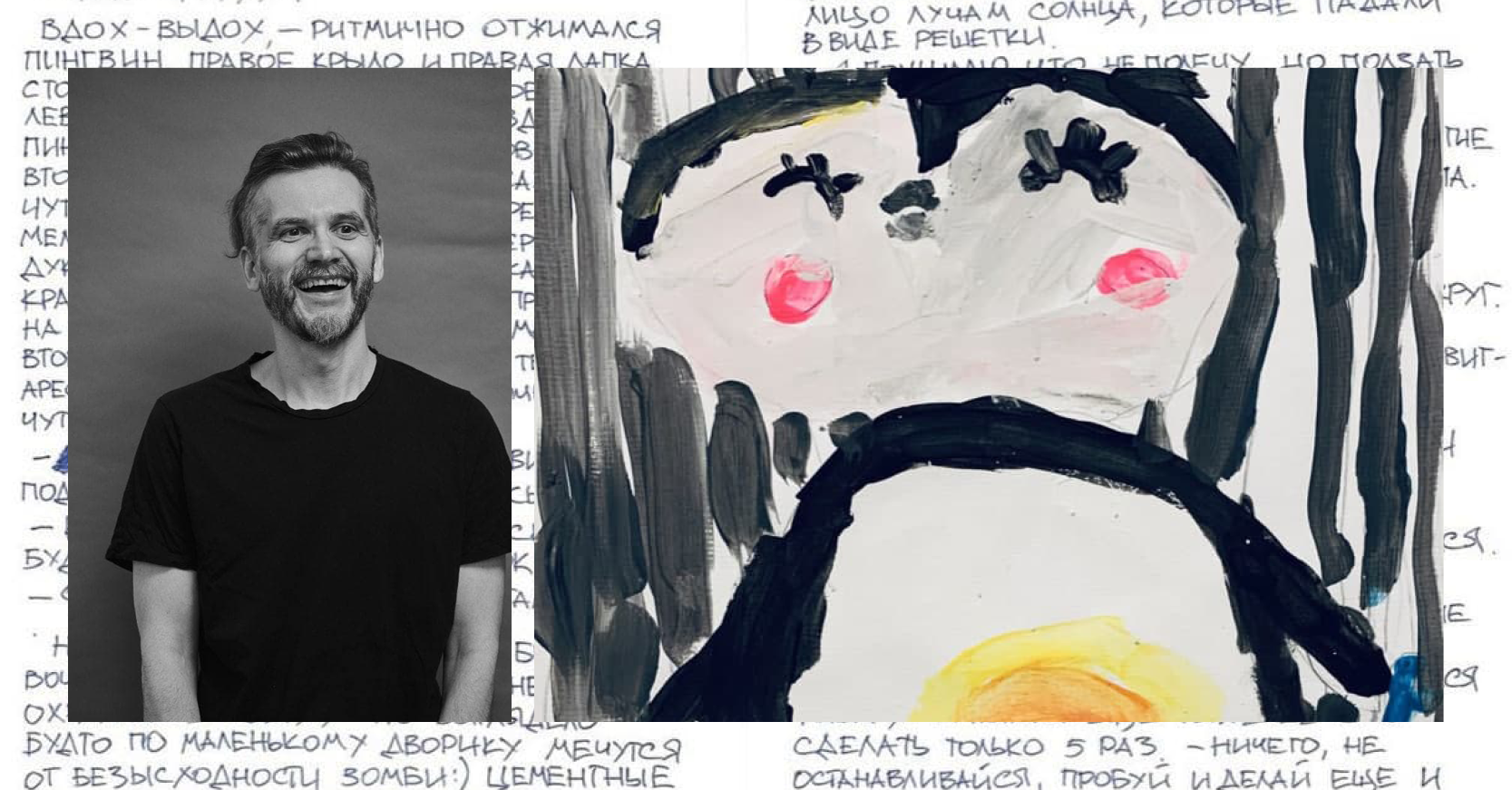 Aliaksandr Vasilevich is a businessman, owner of the Vondel/Hepta advertising agency and the “Ў” Gallery, which was formerly one of the main cultural centres in Belarus. He is also the co-founder of the online media Kyky.org and TheVillage Belarus. He was detained on 28 August 2020 by representatives of the Financial Investigation Department of the State Control Committee.

His flat, office and the companies he manages were searched. Although he was charged on 4 September 2020, his lawyer was prohibited from disclosing information about the investigation, so the charges against him remain unknown.

He has two young daughters. Below are some of the stories he has been writing to his eldest daughter Adelia, who is eight years old. While in detention, his second daughter, Urshula (referred to as Ursh) was born. He hasn’t met her yet. Read more about Aliaksandr Vasilevich and other Belarusian political prisoners here.

Translations of the following letters are available in Russian and Belarusian here.

Letter 1: Papa and the Penguin, or, How to Stay Sane In Prison

Papa was sitting in his cell, drinking coffee and eating chocolate cake. His friends had given him the cake, and it was delicious. And daddy simply loved coffee.

The door opened, and in walked Penguin, with a mattress in one hand and bag in the other. The door slammed shut behind him. Penguin looked exhausted, dishevelled. “Hello,” he said. “Hi, alright?” responded Papa, and he showed Penguin where to put his mattress and his belongings.

After having a drink of tea, Penguin sat down on his bed, and looked at Papa.

“How come you’re so relaxed, and not miserable? After all, you and I have had a bad run of luck. It was all fine, and now it’s terrible :(”

Papa smiled at the Penguin. “And if I didn’t ever get bad, how would you know when it was good? Unfortunate things happen. To everyone. Even in cartoons. To princesses and villains. To good people and bad people.”

Papa took a gulp of coffee and said: “What for? I’m here, in prison. I can’t change that, or have an influence on the situation. But I can choose to be sad or happy. I have power over myself. What would you choose – to be sad, or happy? Or at least calm.”

“Have you been happy before? Told jokes? Played? Read books? Chatted with your friends? Watched cartoons? Played games?”

“That’s how you stay cheerful, don’t let yourself be changed. Keep being just the way you like to be.”

“Yeah, so what? Right now, we’re sitting and having a chat. Right this second. Are you enjoying our conversation?”

“It’s better than thinking about how bad I feel. I’m enjoying it.”

“Uhhhhmmm. Probably, I guess, but later…”

“There isn’t a later! Think about now! Enjoy every moment. Look, here’s a low calorie biscuit.”

“It gets better!” Said Penguin, munching on the biscuit.

“And you can create even more little pleasures; think on them and concentrate on them,” said Daddy, as he took a biscuit himself. The last biscuit of the day.

“Do I have to eat biscuits all the time?” Penguin wondered. “Won’t I get fat? That’s bad.”

Daddy smiled. “Read, if you enjoy it. Get to know the people around you. Treat them the way you want to be treated. Make jokes. Write letters to your friends.”

“Well, you don’t have an iPad. So choose. Do you want to sit there all miserable, or would you prefer to read an interesting book?”

“A boooook!” shouted Penguin, as he flapped his wings.

“Here you go.” Daddy had gotten a book out from under his mattress.

The End of Chapter One.

Adelia, hi. If you liked this story, please draw the penguin 🙂 I love you and miss you so much. Dad.

“Breathe in, breath out.” Penguin was doing rhythmic push-ups. His right wing and right leg were on the bed on the right; his left wing and left leg were on the bed on the left. As he breathed in, Penguin lowered himself below the second tier of the bunk beds, hovering at a height of just under two meters. He could see the grey and yellow wall of the cell, a reproduction of Kazimir’s Malevich’s ‘The Red Cavalry are Riding’, and a boring programme being shown on the TV. Penguin liked to work out on the second level of the bunk beds – the cell was cramped, with 12 prisoners aside from him in the room, which was slightly bigger than a child’s room.

During their assigned walking time, Penguin and Papa paced nonstop from wall to wall. To the guards above, they must have looked like zombies flailing around the little courtyard in desperation 🙂 The cement walls are in bad condition, and there’s a lattice/grid overhead, and a few green leaves higher up along the walls. Sometimes good things can grow, even in cement.

“I wish I could make my wings big enough to fly,” Penguin said dreamily as they reached their ten-thousandth step. Daddy remained tactfully silent as a response. He turned his face up towards the sun’s rays which had made their way through the lattice/grid.

“I know I can’t fly. But I won’t crawl either.” Penguin continued.

In the evening, lying on his bed before going to sleep, Papa decided to continue:

“It’s like with goodness and light. Darkness and boredom all around. But you’re doing something good. Even a little thing. Acts of kindness. And the light gets stronger. The world changes. Even if it’s not as quickly as everyone would like.”

“Is that how do you build a nest out of a bunch of tiny useless pebbles?” Penguin was asking clarification.

A few days later, a neighbour came up to Papa and Penguin, who were doing some intense push-ups, and panting heavily.

The neighbour climbed up, and panting even more vigorously than Papa and Penguin, was only able to do 5 push-ups.

“Don’t worry, don’t give up! Try and do more, and you’ll be able to do even more than me.” Penguin tried to encourage his neighbour, who was bright red, and dripping with sweat.

After a couple of weeks, more than half the cell had started to join in on their workouts.

The neighbour, Papa and Penguin were drinking coffee.

The neighbour was chewing on an unsweetened, but still tasty biscuit, given to Papa by his mother-in-law. “I haven’t done anything in 10 years. And today I feel better. I wrote a letter to my son, telling him I’d started working out,” recounted the neighbour contentedly. “I should take up English too.”

The sadness seemed to clear a little. The bleak, wasted time was gone. But Penguin still couldn’t fly. Penguins can’t fly. Another month passed. Penguin’s term had been extended by two months. He climbed up the bunkbeds. “I’m going to do 300 push-ups,” he thought. And when half of his cellmates, who had been taking their turns to do their own push-ups with him, finally decided to rest, one of his new friends said: “I heard you want to fly. When we get out of here, you can come to me. I’ll teach you how to fly a glider. And then maybe you can learn to fly a plane. You’re a persistent guy.”

Letter 3: The Penguin and the Frame

“What shall we have with our tea?” asked Penguin.

“What’s healthier?” asked Penguin, with a sigh, as he looked at his waist.

“Well, cookies are 10% unhealthy, and brownies are 90% healthy,” laughed Papa.

“Brownies, then!” His companion was decisive.

Papa let him enjoy the moment. And when Penguin reached for a second piece of brownie, he asked him: “Why did you choose the brownie?”

“Oops. How did that happen?”

“You fell for the framing effect, frame in English. It’s an effect of formulation.Often our decision is a result not of what we want, what is correct, or what we like more, but how the question is asked.

“So what do we do, how do we not get caught in that trap?”

“Be careful and think 🙂 So you don’t get manipulated.”

“Can I have a biscuit? I prefer them.”

“Of course, here you are. And I like brownies more.”

“And what are we having for lunch?”

“Great! I’m getting sick of these biscuits. :)”

Check out the new story 🙂 Have a great time celebrating your mum’s birthday. I love you and miss you a lot. Hugs! And give Ursh a hug too!