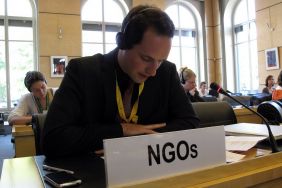 UN Secretary General Ban Ki-moon is seeking to strengthen the UN’s response to acts of intimidation or reprisals against those cooperating or seeking to cooperate with the UN.
The announcement was made during the introduction of his 2016 annual report to the Human Rights Council’s 33rd session.

The report cites cases of reprisals across many regions which range from; harassment, intimidation, arbitrary arrest and detention, including incommunicado and solitary confinement, travel bans, charges and sentencing, sometimes to lengthy prison terms, acts of torture and other forms of cruel, inhuman or degrading treatment, including physical attacks and sexual abuse, denial of access to medical attention in detention, to, in extreme cases, death.

Social media is reported to be used often as a tool for the intimidation of human rights defenders and NGOs.

Florian Irminger, Head of Advocacy at HRHF, received a death threat during the 31st session of the UN Human Rights Council. Evidence strongly suggests that a diplomat working for the Russian Federation in Geneva and attending the Human Rights Council made this threat. HRHF urges UN action against this threat, and calls for an end to reprisals against all human rights defenders.

“HRHF takes this threat and the climate of increased reprisals against human rights defenders seriously, and we welcome the action taken by the president of the Human Rights Council. Furthermore, each individual State of the United Nations must hold their representatives responsible for acting in line with the States responsibility to protect human rights defenders, in international fora and at home” said Maria Dahle, Executive Director of HRHF. “This death threat – delivered at the very UN institution mandated to address such reprisals – by a representative of the Russian Federation, should at least lead to the concerned diplomat being suspended from work at the Human Rights Council.”

The President of the Human Rights Council also told that the ambassador of the respective mission recognised that the threat originated from one in his delegation and that the employee had been reprimanded. Still, at the opening of the 32nd session of the Council, the Russian diplomat was attending, continuing his work on human rights.

“This is unacceptable. Just like any State, the Russian Federation has the responsibility to protect and promote human rights. States should suspend diplomats, who have evidently conducted smear campaigns and made threats against human rights defenders, from continuing their work at the Human Rights Council. If no action is taken, it reflects a lack of commitment to human rights and should not be tolerated by the international community,“ said Maria Dahle.

They stated: “We are extremely concerned about the threatening nature of the message. We believe this issue must be treated with utmost seriousness.”

On Thursday 24 March 2016, during the adoption of the resolution on human rights defenders, an account sent a tweet directly to Florian Irminger, the tweet contained a disturbing graphic and was accompanied by a written threat on his life.

The account of the individual making this threat, which is now closed, included a succession of tweets and a photo that show the individual was closely monitoring the debate and vote on the Russian-led amendments to the human rights defenders resolution.

The President of the Human Rights Council also addressed this trend in his speech at the opening, urging everyone to protect and promote human rights, online and offline.

This is not the first time HRHF has faced reprisals for its work at international fora. Members of Human Rights House Azerbaijan were threatened by Azeri diplomats at OSCE events, and in 2011 the speaker of the Azeri parliament called for a strong reaction against Azeri human rights defenders speaking out at the Council of Europe.

More on this story from other sources

United Nations should address the crackdown of civil society in the Russian Federation
In a written statement submitted at the 23rd session of the United Nations Human Rights Council (UN Doc A/HRC/23/NGO/69, 23 May 2013), HRHF raised concern over the continued crackdown on civil society in the Russian Federation. Addressing the foreign funding issues for Russian NGOs, as well as the legislation on protests.
HRHF also addressed the legislation in regard to foreign advocacy: “Under the provisions of the Criminal Code, one could imagine that somebody advocating for changes in public policies abroad, even at the United Nations, and especially changes in anti-terror legislation or in public security policies such as the use of force by police forces during demonstrations, could be qualified as a traitor.”

Restrictions on freedom of association, expression, and assembly in the Russian Federation.
In a written statement submitted at the 22nd session of the United Nations Human Rights Council (UN Doc A/HRC/22/NGO/159, 25 February 2013), the Human Rights House Voronezh and its member NGOs, with HRHF, raised concern over laws limiting the rights to freedom of association and peaceful assembly, as well as freedom of expression, adopted since June 2012 in the Russian Federation.
The statement also addressed the shameful law against “Propaganda of homosexuality.” The United Nations Special Rapporteurs on freedom of expression, human rights defenders, cultural rights, and on the right to health warned that the bill may undermine the enjoyment and promotion of human rights in Russia, unjustifiably singling out lesbian, gay, bisexual, transgender and intersex people, who have increasingly become the target of sanctions and violence in the country.