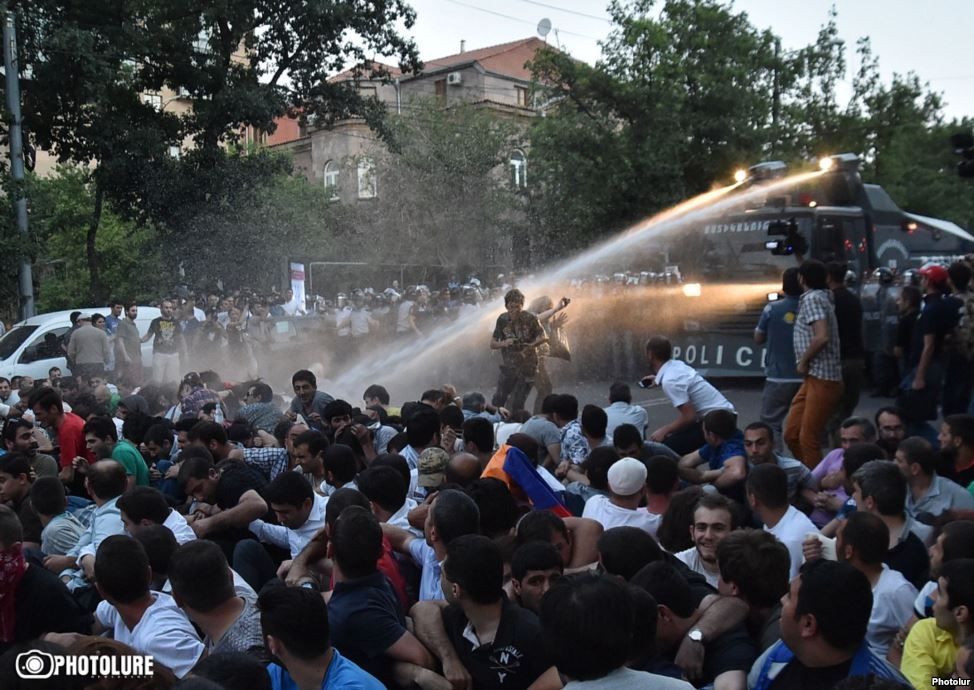 237 protestors were arrested in Armenia during the night of 22 June and early morning of 23 June, including journalists and human rights defenders. The police needs to stop using excessive force to disperse protestors and immediately and unconditionally release detained civil society actors and journalists.

As a reaction to raising electricity prices in Armenia, several thousand people took the streets in Yerevan. The protest began on Monday, 22 June, at Yerevan’s Freedom Square and took the path in direction of the presidential palace. Protestors were met by police and stopped on Baghramyan Avenue. Around 20:00, protestors refuse to move and sat down in front of the police.

As the police considered the march as unlawful, it requested protestors to return to Freedom Square and shut the streetlights off. Police later used violence to later disperse the protest.

Council Chairman of the Journalists’ Club Asparez, Levon Barseghyan, and Co-president of the Societal Research & Consultancy Center (Socioscop), Anna Zhamakochyan, were both detained. “We call for their immediate released from detention, as they are human rights defenders fulfilling their monitoring and observation role, as well as their own right to peacefully protest and protect,” said Florian Irminger, HRHF’s Head of Advocacy. “Detained journalists must also be immediately released and other detained protestors must be guaranteed access to legal counsel and representation, as well as access to representatives of human rights groups.”

[We learned on 23 June, 14:00 CET, that Anna Zhamakochyan was released from detention.]

[We later also learned that Levon Barseghyan was released from detention.]

Whilst some detained individuals who were are said to have been charged with hooliganism (RA Criminal Code Article 258 Part 1), others protesters were hospitalised.

At present time, human rights organisations in Armenia are monitoring detention facilities, including Armenian Helsinki Association, a member of the Human Rights House Yerevan. “Authorities need to fully cooperate with civil society groups to guarantee legal and medical access to those detained,” further stated Florian Irminger. According to observers of the Human Rights House Yerevan, “the right of legal and medical access for those detained is limited. The attorneys have difficulties to meet those who are currently in detention sites.” Helsinki Citizens’ Assembly – Vanadzor, Helsinki Committee of Armenia, as well as Protection of Rights without Borders, have already starting cooperation to provide legal assistance to detainees.

The Armenian authorities must also ensure that journalists and other media workers are free to fulfil their work independently and without hindrance.

The right to peaceful protest must be guaranteed

According to human rights defenders, in the morning of 23 June, “people were beaten, hosed down, pushed and shoved in order to clear the street. There were numerous individuals who sustained serious injuries and several journalists and activists who were trying to document the abuse were also arrested and brutally beaten.”

The police intervention of 22-23 June is marked by the fact that it was decided although protest coordinators, and even former President Serzh Sarkisian, offered to negotiate. “The lack of willingness by the authorities to communicate with protestors, even at a difficult moment and in the middle of the night, is a breach of international standards, as underlined by the United Nations Human Rights Council in its March 2014 resolution on the right to peaceful protests,” reacted Florian Irminger.

In light of the ongoing situation, police needs to halt the use of violence to disperse protestors. The right to peaceful protest must be guaranteed, especially the right to spontaneously assemble without specific authorisation. Armenian authorities must also immediately begin the investigations into the use of force by police units and hold those responsible for excessive use of force, cruelty towards protestors and ill treatment accountable. Such measures are indispensible at this stage.

The Public Services Regulatory Commission of Armenia decided on 17 June 2015 to raise electricity prices by 16 % to 49 drams (0.1 $) per kilowatt/hour. It comes as the 3rd decision in this direction in the last 3 years. The 22 June protest was in fact the 4th day of protest in the country on the energy prices.

Contacts for media and to organise interviews with Armenian human rights defenders: