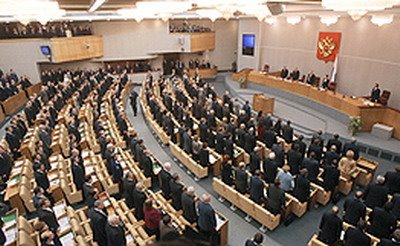 On 19 May, the Russian Duma adopted a new law enabling Russian authorities to label any organisation as “undesirable” and thus criminalise them.

“In terms of legislation restricting civil society space, this text clearly reaches a new low,” said Head of Advocacy at the Human Rights House Foundation (HRHF), Florian Irminger, and continues: “It puts a Damocles sword over any foreign entity working in the country. Non-allegiance to the government’s policies will from now on not only mean possible public banning with the ‘foreign agent’ label but also pure and simple outlawing.”

Since President Vladimir Putin’s re-accession to the presidency in March 2012, a series of measures aiming at controlling civil society and shutting down critics have been adopted. The famously named “foreign agent” law is only one of them, amongst restrictions to freedom of expression, and the reintroduction of criminal penalties for defamation.

Ironically, the Federation Council and President Putin are now the only ones that can stop this repressive law, if they choose to not approve it. If this law is passed, any foreign or international entity that the government declares “undesirable” will be banned from working in Russia. Moreover, the institution’s bank accounts in Russia will be frozen and its supervisors and staff can face civil and criminal penalties.

“We strongly call upon President Putin to veto this law. And wish he would take this chance to stop the escalating distance and hostility between Russia and the outside world, of which the repression of civil society is inside the country a key element” said Florian Irminger.

The law states that foreign institutions can be declared “undesirable” if they “present a threat to the basic constitutional order of the Russian Federation, the defence capacities of the Russian Federation or its national security.” The authorities can consider online or offline activities as a threat, and there are no territorial limitations. The territorial limitation foreseen in the law only applies for the banning of activities of an “undesirable organisation.” Overall, the law allows for an extremely broad interpretation, giving full leverage to authorities to use the law against its critics.

Just as with the “foreign agent” legislation, an institution becomes “undesirable” as soon as the Ministry of Justice makes the announcement on its website. The statement is based on the General Attorney notifying the police authorities of a new “undesirable” institution. Any institution can appeal the decision in court.

In addition to such criminal penalties, “undesirable organisations” are forbidden from holding any kind of events and from possessing or distributing materials, including via social media.

“The labelling of organisations as ‘undesirable’ says it all: those organisations the authorities do not want in the public sphere will be silenced,” Irminger explains.

“Making it clear by law that anybody can be hit is an open sign that authorities aim at also controlling business leaders who raise criticism against public policies or who do not act in a satisfactory manner according to the authorities,” concluded Irminger.

United Nations should address the crackdown of civil society in Russia

In a written statement submitted at the 23rd session of the United Nations Human Rights Council (UN Doc A/HRC/23/NGO/69, 23 May 2013), HRHF raised concern over the continued crackdwon of civil society in the Russian Federation. We at the time addressed the foreign funding issues for Russian NGOs, as well as the legislation on protests.

We also addressed the legislation in regard to foreign advocacy: “Under the provisions of the Criminal Code, one could imagine that somebody advocating for changes in public policies abroad, even at the United Nations, and especially changes in anti-terror legislation or in public security policies such as the use of force by police forces during demonstrations, could be qualified as a traitor.”

Restrictions to freedom of association, expression and assembly in Russia

In a written statement submitted at the 22nd session of the United Nations Human Rights Council (UN Doc A/HRC/22/NGO/159, 25 February 2013), the Human Rights House Voronezh and its member NGOs, with HRHF, raised concern over laws limiting the rights to freedom of association and peaceful assembly, as well as freedom of expression, adopted since June 2012 in the Russian Federation.

We also addressed in this submission the shameful law against “Propaganda of homosexuality.” The United Nations Special Rapporteurs on freedom of expression, human rights defenders, cultural rights, and on the right to health warned that the bill may undermine the enjoyment and promotion of human rights in Russia, unjustifiably singling out lesbian, gay, bisexual, transgender and intersex people, who have increasingly become the target of sanctions and violence in the country.