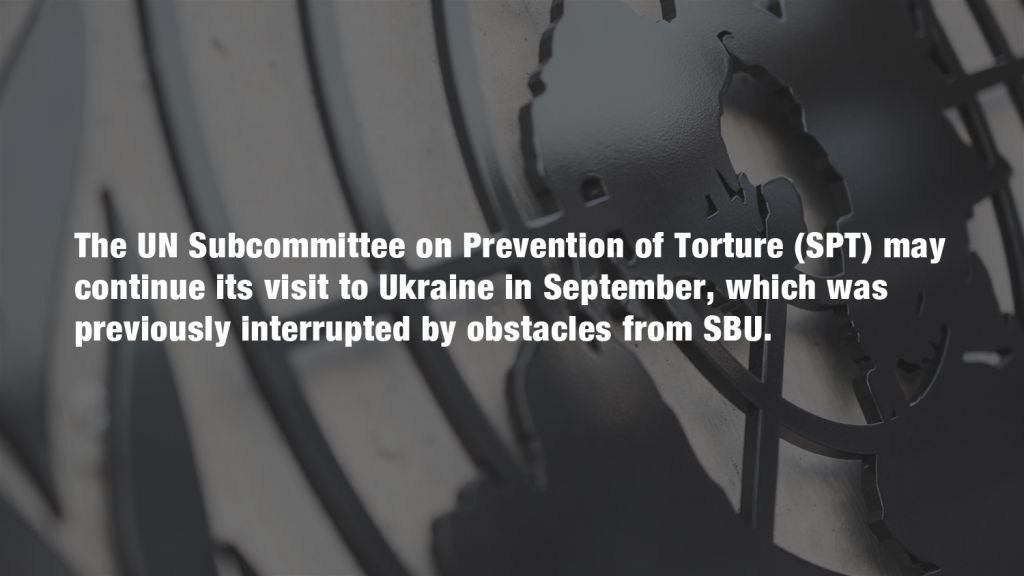 UN torture prevention body to return to Ukraine in September

The UN Subcommittee on Prevention of Torture (SPT) may continue its visit to Ukraine in September, which was previously interrupted by obstacles from SBU.

This was discussed at a meeting between Valeriya Lutkovska, Verkhovna Rada’s Human Rights Commissioner, Hryhoriy Nemyria, Chairperson of the Verkhovna Rada’s Committee on Human Rights, National Minorities and Interethnic Relations, and MEP Rebecca Harms, which took place on June 13th at Lutkovska’s office, as reported to the Human Rights Information Center by her press-service.

Earlier, Lutkovska and Nemyria made a joint appeal to the Ministry of Justice of Ukraine, urging it to properly provide for the Subcommittee’s visits and to invite its representatives in the near future for an unscheduled visit to Ukraine, in order to fully implement Ukraine’s international commitments.

According to preliminary information, the visit is scheduled for September of this year.

The first Deputy Minister of Justice Natalya Sevostyanova, as she wrote on her Facebook page, urgently arrived on June 14th to Geneva, Switzerland, for a meeting with the UN Subcommittee on Prevention of Torture. The theme of the meeting is the resumption of the Subcommittee’s visit to Ukraine.

“An urgent meeting in Geneva changed all of the plans. A visit to Oslo had to be paused. 3 airplanes later I am with Sergíy Kyslytsya. We are working on having the mission resume its work in Ukraine as fast as possible”, writes Sevostyanova.

She adds that another round of negotiations has been held and the final decision of the Subcommittee is expected in the coming days.

Sevostyanova also specified that, at the previous meeting on May 26th, SPT agreed to continue its visit on the condition “that the SBU guarantees the mission’s immediate access without notice into any places where people may be held.”

The SPT delegation suspended its visit to Ukraine on May 25th after it was denied access to several places where it suspected that SBU employees illegally deprived people of their freedom.

According to the Optional Protocol to the Convention against Torture (OPCAT), the SPT delegation must visit all states that are parties to the protocol, and may carry out monitoring visits without warning.

The UN also claims that it has repeatedly received reports from victims and their relatives who argue that, in Ukraine, there is a widespread practice of SBU emplo5yees depriving the detained of any contact with family and access to legal counsel.

On May 26th, SBU Head Vasyl Hrytsak said that SBU justifiably denied the UN delegation access to their regional premises in Mariupol and Kramatorsk because detainees and prisoners are not held there.

At the same time, Sevastyanova claims that the Security Service did not allow the SPT mission into its premises because a Russian citizen was part of the mission.