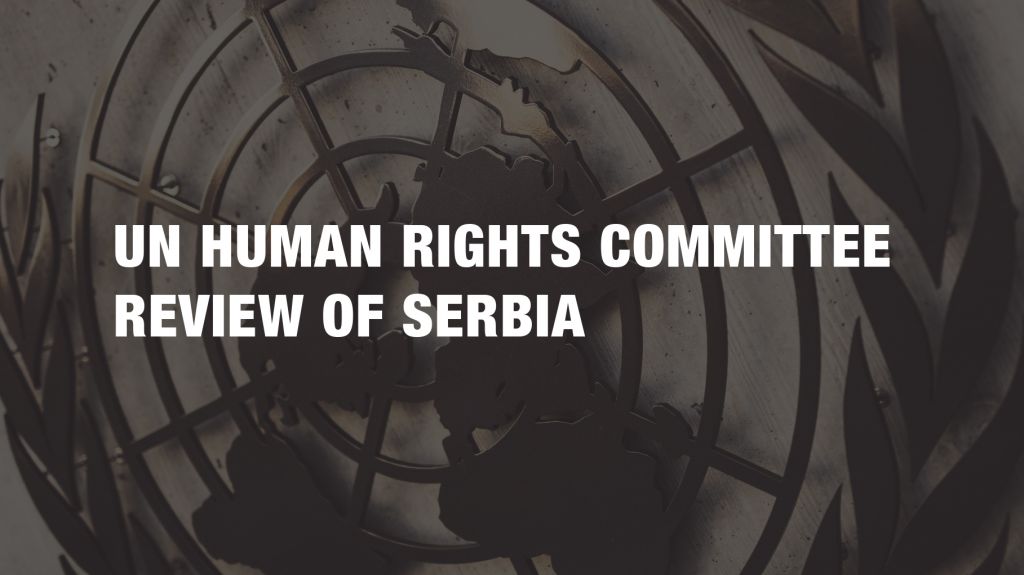 The United Nations Human Rights Committee has raised concerns and issued recommendations to the Serbian authorities. These relate to discrimination, torture and ill-treatment, refugees and asylum seekers, administration of justice, and freedom of expression.

The Committee published its concluding observations on Serbia on 28 March, following a review of the country by the Committee on 7–8 March.

Recent months have seen a growing trend in Serbia to vilify the media and journalists, with them accused of working against the State, as well as attacks against national human rights institutions and civil society organisations. In this respect, the Committee expressed its concern about allegations of public officials “publicly vilifying and intimidating media workers,” about “the narrowing of space for debate” and the “prosecution of journalists and civil society actors for expressing their opinions.”

“Although Serbia has aligned its legislation with EU Acquis [common rights and obligations], in practice it has maintained political and financial control over a number of media, further endangering freedom of expression and speech,” commented Petar Žmak from Civic Initiatives, member of Human Rights House Belgrade, who gave input to the Committee during the review in Geneva.

To overcome current threats to freedom of expression, the Committee encouraged the Serbian authorities to protect media workers from all forms of intimidation and ensure all cases are investigated and the perpetrators prosecuted.

It also made clear to the authorities that they should refrain from prosecuting journalists, human rights defenders and other civil society actors as a means of deterring or discouraging them from freely expressing their opinions, take steps to ensure the transparency of media ownership, and ensure that privatised media are free and independent.

Expressing its concern with regard to the independence of judiciary, the Committee said that alleged cases of pressure and retribution by politicians and the media on judges, prosecutors, the High Judicial Council and the State Prosecutorial Council were “particularly worrying.” The Committee asked the Serbian authorities to take steps to guarantee judicial independence and properly investigate all cases of pressure against the judiciary.

The Committee identified key priorities in its recommendations, including preventing the exclusion of the Roma population, meeting national and international obligations with regard to refugees and asylum seekers, and promoting freedom of expression.

Regarding conditions for refugees, Petar Žmak said: “Serbia must abstain from pushbacks, increase significantly the living conditions in reception centres, and address the inadequate treatment of unaccompanied minors.“

The review takes place at a key moment for Serbia, less than a month before the Presidential election that will be held on 2 April. The government and the new President will have the opportunity to use these recommendations as an action plan of key human rights priorities for the coming years.

More on this story