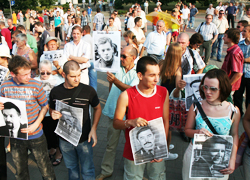 The government of Republic of Belarus is silencing voices for the proper investigation of political disappearances. Amid growing demands to address the issue, officials ban public events and arrest activists. Having been missing for more than 10 years, some political opponents of President Aliaksandr Lukashenka are still stirring up public activism in this country.

Raman Kisliak, a human rights activist who had applied for the rally, stated he is going to proceed with the organization of the rally anyway. The meeting is due to take place on 30 August, the International Day of the Disappeared. Promotion of International Convention for the Protection of All Persons from Enforced Disappearance is the meeting’s central focus. 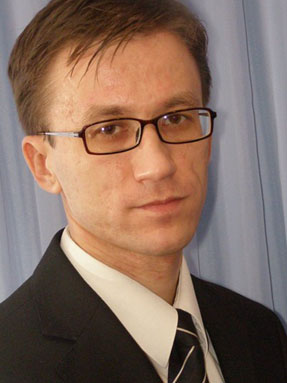 Kisliak, left, planned to organize the meeting on the pedestrian zone of Lenin Square next to the building of the Scientific and Technical Library.

Since the location is not on the formal list of “allowable” sites for mass events, the authorities mentioned it as a reason to reject Kisliak‘s application.

It is a common practice in Belarus for officials to ban events of independent actors for similar reasons. Human rights defenders believe this practice to be contradictory with a freedom of peaceful assembly, so does Kisliak in this case:

“I believe that such a ban is a discrimination against me. On 31 July almost on the same place a big concert was held as a part of the City Day celebration”.

He says he is expecting some 50 participants to turn out to manifestation on 30 August in Brest.

Missing since 1999-2000
The issue of the disappeared prominent public figures has been on the agenda in Belarus for more than a decade.

The international community considers some former high-ranking Belarusian officials involved in kidnapping and possible murder of the missed. None of them is still holding high-ranked office, except for the President Lukashenka.

Luckily, after 2000 political abductions were halted, contrary to 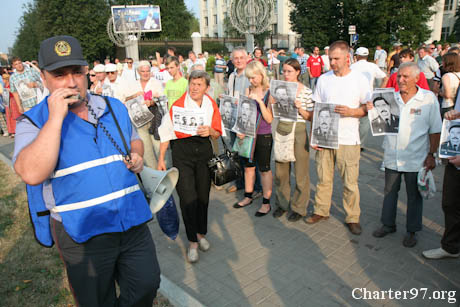 arrests and imprisonments. Many link this progress to the scale of both domestic and international outcry following the first disappearances.

However, the former cases have never been properly inquired into. The official investigation, considered extremely formal by many in Belarus, is silent.

On 16 August, hundreds of people in Minsk gathered for the rally “We demand international investigation of the cases of the abducted!” The peaceful rally ended with arrests.

More than 200 persons gathered near the Academy of Sciences with portraits of the abducted Belarusians – vice speaker of the Supreme Council Viktar Hanchar, former interior minister Yury Zakharanka, businessman and public figure Anatol Krasouski and journalist Zmitser Zavadski. Protesters were standing along the traffic area of Independence Avenue.

Just like many other opposition‘s events, the rally had not been officially sanctioned.

All who were approaching the Academy of Sciences, were searched by policemen in plainclothes, and their bags and rucksacks were frisked. 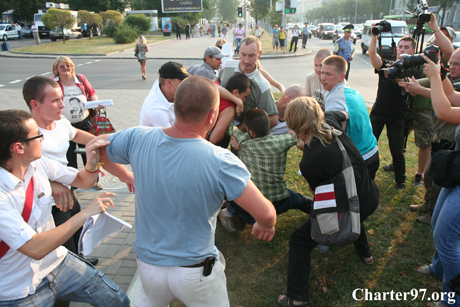 Youth leaders who had applied for holding the rally – Yauhen Afnahel and Pavel Yukhnevich – were attacked by policemen in mufti. Activists of “European Belarus” Maxim Serhiyets and Andrei Mouchan were arrested as well.

Participants of the rally demanded to carry out international investigation of abductions and assassinations in Belarus in 1999-2000 of former Interior Minister Zakharanka, vice speaker of the Supreme Council Hanchar, businessman and public figure Krasouski and journalist Zavadski.

General Zakharanka has been missing since 7 May, 1999. He was a former Minister of Internal Affairs dismissed by President Aliaksandr Lukashenka for criticizing the country’s government. He was also a founder of the Officers Union and a member of the oppositional United Civil Party.

Later on other people well-known in their country began to disappear: a politician Hanchar, a businessman Krasouski and a TV cameraman Zavadski.