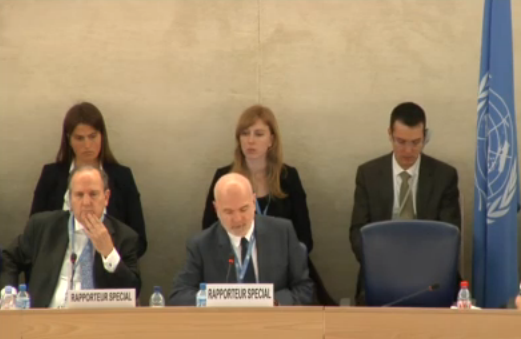 In its statement on the situation of human rights defenders on 10 March 2015 at the Human Rights Council, the Human Rights House Foundation highlighted the worrying situations in Azerbaijan, Russia and Armenia.

At the occasion of the annual dialogue with the United Nations Special Rapporteur on the situation of human rights defenders at the 28th session of the United Nations Human Rights Council, on 10 March 2015, HRHF welcomed the efforts of the Special Rapporteur to gather information from human rights defenders through the organisation of regional consultations.

As stated by the Special Rapporteur in his report, “States must ensure that human rights defenders can exercise their functions within a national framework properly supported by the appropriate legislative and regulatory texts, and remove the obstacles that some national laws may place in the path of legitimate activities to promote and protect human rights.”

On 19 August 2014, three special rapporteurs, including the mandate holder on the situation of human rights defenders, the rights to freedom of association and peaceful assembly, and the right to freedom of expression, said to be “appalled by the increasing incidents of surveillance, interrogation, arrest, sentencing on the basis of trumped-up charges, assets-freezing and ban on travel of the activists in Azerbaijan.” They called upon Azerbaijan to immediately stop the criminalisation of human rights defenders and to immediately release those who were unjustifiably detained.

The experts highlighted the specific cases of Leyla Yunus, Director of the Azerbaijani Institute of Peace and Democracy, and her husband Arif Yunus, head of Conflict Studies in the Institute of Peace and Democracy; human rights defender Rasul Jafarov, coordinator of Art of Democracy and head of Human Rights Club; and the human rights lawyer Intigam Aliyev, chair of Legal Education Society.

The well-known independent investigative journalist Khadija Ismayilova is in custody since 5 December 2014. She was sentenced to 2 months pre-trial detention on ludicrous charges of incitement to suicide, on 8 August 2014, police raided the offices of the Institute for Reporters’ Freedom and Safety (IRFS), a leading media rights NGO in the country, lead by Emin Huseynov who is facing similar charges as the previously mentioned human rights defenders.

This wave of repression comes after the sentencing on in May 2014 of Anar Mammadli and Bashir Suleymanli to respectively 5 years and 6 months and 3 years and 6 months imprisonment. Those two human rights defenders are the leaders of the only independent election-monitoring group in Azerbaijan. They were also sentenced on charges of tax evasion, illegal business activity, and abuse of authority.

We call upon Azerbaijan to put an end to the systematic punishment of leaders of civil society, and to immediately and unconditionally release all human rights defenders, activists and journalists held in custody. We further call upon Azerbaijan to cooperate with independent human rights mechanisms, including by ensuring their ability to conduct country visits, and are in this manner satisfied to see that the Subcommittee on Prevention of Torture (SPT) has scheduled a new visit to the country, following the one it had to cancel in September 2014.

More and more countries misuse or design legislation in order to impede and criminalise the work of human rights defenders, or to label them as “foreign agents” such as in the Russian Federation, as underlined by the Special Rapporteur in her public statement of 12 July 2012.

As a consequence of the law in Russia, several hundreds of NGOs were inspected, tens of which are in process of challenging the administrative charges brought against them for not registering as foreign agents or started a process of self-liquidation as they do not consider possible to work under the label of “foreign agents.”

Another worrying development is the emerging law on “undesirable foreign organisations” opening room for further selective persecution of organizations and individuals within Russia for cooperating with international human rights organisations, which are labelled as “undesirable.”

As stated by the Special Rapporteur, it is of utmost importance to repeal such legislation.

HRHF also echoed the Special Rapporteur’s worries about the increased pressure faced by women human rights defenders, as we see in Armenia, where threats and attacks against gender rights NGOs and LGBT rights defenders remain uninvestigated and thereby sanctioned by the authorities.

Human Rights House Foundation at the 27th Session of the Council