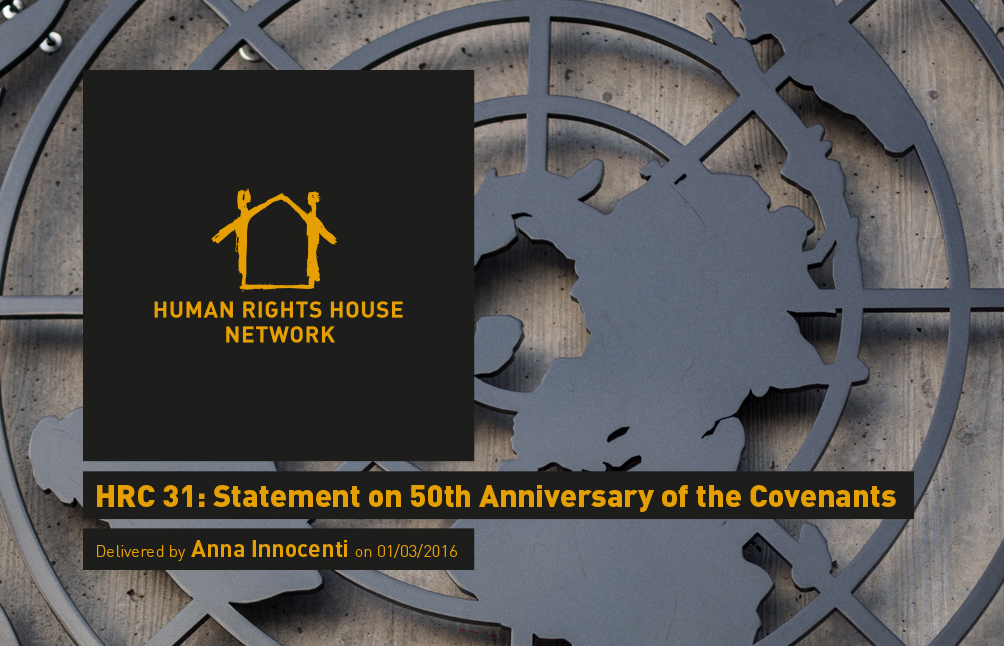 Human Rights Council 31: Statement on 50th Anniversary of the Covenants

Human Rights House Network delivered a statement to a panel discussion at the Human Rights Council. This Panel discussion was sponsored by the Russian Federation with the participation of the Minister of Foreign Affairs Sergey Lavrov.

The Statement (Check against delivery):

At the occasion of the 50th Anniversary of the International Covenants on Civil and Political Rights (ICCPR) and on Economic, Social and Cultural Rights, the Human Rights House Foundation (HRHF) deplores that the universal rights inscribed in the Covenants have not become reality in too many places of the world.

The intentions 50 years ago, when the Covenants became law, have not translated and indeed too many States are not only violating those rights at home, they are also weakening the international system set up to hold violators accountable. We believe this Panel should be a mean to raise the attention towards gaps in implementation, rather than self-congratulation.

Laws in the Russian Federation constitute a threat to the right to exercise freedom of association in the country. They do so, because they are limiting the autonomy of associations, both in carrying out their activities and in accessing resources. Legislation in your country also gives a right to authorities to consider certain type of organisations undesirable. Thereby, you give the power to those in power to retaliate against those critical of your power.

Another worrying legislative step is the amendment of 23 October 2012 of the Criminal Code. The treason is redefined as “any consultative or other assistance to a foreign state, an international organisation, or their representatives in activities against the security of the Russian Federation.”
How is such legislation, also impacting negatively the civil society’s ability to promote economic, social and cultural rights, in line with obligations under the Covenants?

The Covenant established a mechanism to review its implementation in all ratifying States, thanks to the Human Rights Committee. We would in this regard like to endorse the statement made by the Centre for Civil and Political Rights earlier.

It is therefore worrying that some States bluntly ignore their direct procedural obligations deriving from the Covenant.

Belarus for example has not sent any information on the implementation of the Covenant to the Human Rights Committee since 14 years. Even more worrying, in violation of its obligations under the Optional Protocol, Belarus has carried out death sentences despite the call for interim protection measures issued by the Human Rights Committee. In some of the cases, when the Committee issued its view on the specific case, it found due process violations. But the concerned person was already executed.

Cooperation with the treaty bodies does not only imply the submission of reports, it also calls for the State’s genuine willingness to put all possible efforts into implementation of the Committees’ findings. Such cooperation with the Human Rights Committee is therefore fully part of any State’s obligations under the Covenant.

50 years ago, the intention of the international community was to establish minimal common and universal rules, a modus operandi. Genuine willingness by the authorities of any country is indispensible to ensure the fulfilment of a State’s obligations deriving from the Covenants. We too often see such a willingness lacking.