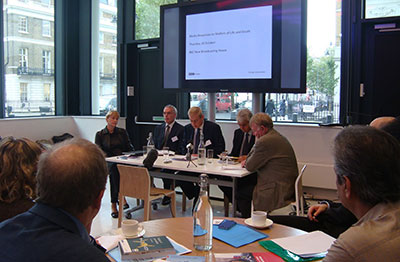 Index on Censorship, Committee to Protect Journalists and ARTICLE 19 joined more than 40 international media organisations demanding urgent action by governments, the United Nations and industry to stop violence against journalists and end impunity in attacks on the press.

Published: October 27, 2012 Author: HRH London, based on Article 19 and Index on Censorship and Committee to Protect Journalists information.

The joint “London Statement by members of the global media community on the Safety of Journalists and the Issue of Impunity” was delivered on 21 October 2012 to the UN Educational, Scientific, and Cultural Organization (UNESCO) and marks the second

There, implementation of the UN Plan of Action on the Safety of Journalists and the Issue of Impunity will be debated by UN agency representatives, member states, and civil society. Participants will also mark the second International Day to End Impunity on 23 November.

According to the Committee to Protect Journalists (CPJ), the Plan of Action represents an immense opportunity for the international community to mobilise on behalf of those whose reporting on war, corruption, human rights, and other issues serves as a keystone to the UN’s work.

The Plan proposes measures for UN agencies to i mprove coordination and develop programs to protect journalists and combat impunity in cases of anti-press violence. It was drafted by UNESCO and approved by the UN Chief Executive Board this year, after some debate among countries including India, Brazil, and Pakistan.

Journalists have the right to work free from harm

In their joint statement Index on Censorship, ARTICLE 19 and other organisations condemn all cases of killings and other physical attacks, intimidation, harassment, abduction and wrongful imprisonment as well as other forms of oppression of journalists and other media workers and express their dismay at the failure of many governments to end impunity for the killers of journalists.

Members of the global media community also express their disappointment and concern at the lack of effectiveness of previous United Nations interventions including UNSC Resolution 1738 on the safety of journalists in conflict and an end to impunity.

The statement emphasises that journalists and media workers have the right to work free from harm, harassment and abuse. It is fundamental to freedom of expression and therefore a matter of urgent and legitimate concern for governments and societies around the world as well as the news media themselves.

The signatories encourage all news media to monitor regularly the actions of their governments, judicial authorities and other institutions in implementing the UN Plan of Action and ending impunity.

They express their strong concern that in carrying forward the Plan of Action the UN system, as well as other relevant national and international bodies, should operate effectively and in accountable ways to persuade Member States to create safe environments for working journalists.

They propose that the acute concerns of the news media for meaningful and practical actions are fully and seriously taken into account at the UN Inter-Agency Meeting, and thereafter in the effective implementation of the UN Plan.

“Potentially game-changing initiative”
Signatories to the joint statement were briefed last week at a symposium at the BBC’s new London headquarters, hosted by the Centre for Freedom of the Media and the BBC College of Journalism and organised in partnership with the World Association of Newspapers (WAN-IFRA), the International Press Institute, CPJ, and International News Safety Institute.

Guy Berger, Director of Freedom of Expression and Media Development at UNESCO, called for active engagement by media outlets in the “potentially g

ame-changing initiative” through reporting on attacks against journalists, making inquiries when a colleague is murdered, and monitoring the actions of governments and intergovernmental bodies.

CPJ says that now the challenge for UNESCO and other agencies is sustaining the commitment and following through on the plan’s implementation; freedom of expression groups must ensure the follow-up by agencies, as well as by member states.

Here you can find the full text of the statement and the signatories of the London Statement.