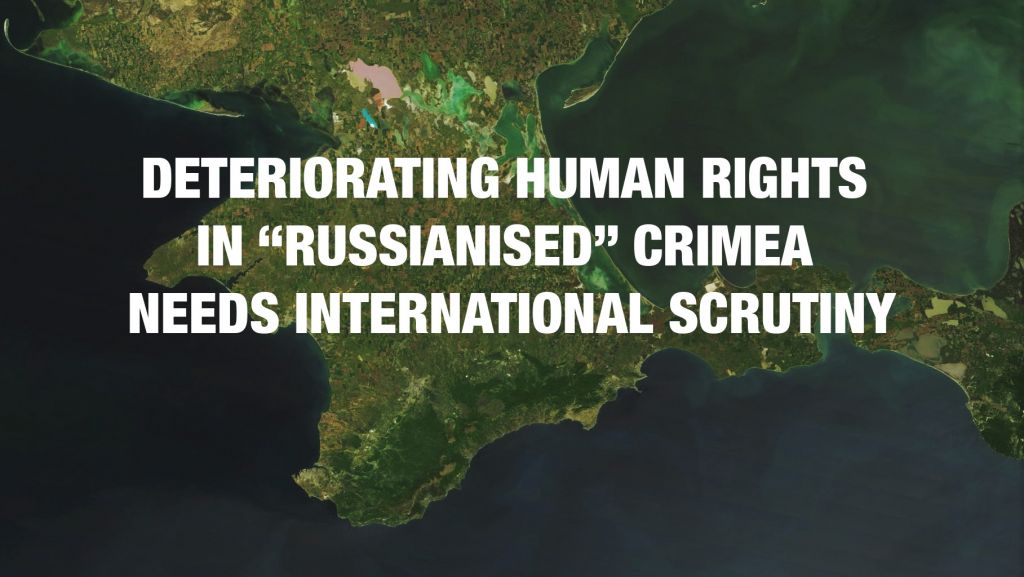 At the United Nations, Human Rights House Foundation highlighted the increasing “Russianisation” of Crimea, and the human rights violations as a consequence, and called on the international community to further scrutinise the human rights situation in Crimea. Furthermore, all parties in the on-going conflict in Eastern Ukraine must fulfil their obligations under international human rights law.

The European Union expressed concern about human rights violations in Crimea and Eastern Ukraine. Several calls were made for full, free and unhindered access to Ukraine and Crimea, a key issue given the fact that no international monitors are able to access Crimea to date, including the United Nations Human Rights Monitoring Mission in Ukraine.

“The international community needs to pay more attention to human rights violations in Crimea. The de facto authorities of Crimea, and their supporters – meaning the Russian Federation, need to know that they will be held accountable for the human rights violations that have occurred since the illegal annexation of Crimea. One of the things we have specifically called for is for the General Assembly to have a resolution on the human rights situation in Crimea, not necessarily the territorial aspect, but really to underline what has happened to Crimea since annexation,” commented Florian Irminger, Head of Advocacy at the Human Rights House Foundation (HRHF) in the video above.

Russia has further integrated Crimea into its southern federal district (in violation of the UN General Assembly resolution 68/262 on the territorial integrity of Ukraine). Russia also held parliamentary elections in Crimea, a region which is not recognised as a part of Russia, on 18 September 2016.

HRHF further elaborated at the Human Rights Council: “The de facto authorities in Crimea significantly curtailed the fundamental freedoms of expression, assembly, association, conscience and religion. They used anti-extremism and anti-terrorism laws to criminalise non-violent behaviour and stifle dissent, and they exploited judicial and law enforcement systems as instruments to clamp down on opposition voices.”

HRHF also raised the issue of passports and citizenship “Russia and the de facto authorities have coerced residents of Crimea into receiving Russian passports, by making it significantly more difficult to formally remain Ukrainian than to change their citizenship to Russian. Furthermore, repression against those who consider themselves Ukrainian or hold other national or ethnic identities has led many to flee Crimea.”

The Crimean Tatars have been especially affected. In HRHF’s article on the 12 May 2016 EU Parliament adoption of a resolution on the Crimean Tatars, Maria Tomak, Center for Civil Liberties and coordinator of the LetMyPeopleGo campaign, likened the current treatment of the Tatars to their persecution in the Soviet Union. A Russian-appointed court banned the Mejlis, the highest executive-representative body of the Tatars, shortly after the annexation of Crimea. The resolution on Crimean Tatars condemned the ban of the Mejlis, as well as the human rights violations they face.

HRHF strongly calls on the international community to take further action. “It is high time for the international community to send a clear message to the authorities in Crimea, and their supporters: they will be held accountable for the human rights violations, which occurred since the annexation,” commented Florian Irminger. “We call upon the General Assembly to do so in a resolution this Autumn.” The decrease of attention to the situation in Ukraine, including Crimea, at the Security Council is of concern. HRHF calls upon the Security Council “ to continue to monitor and brief its members on the human rights situation in Ukraine, including Crimea.”

HRHF also raised the issue of the on-going conflict in Eastern Ukraine with its statement, which cited an OHCHR report on the human rights situation in Ukraine, detailing the “the constant and growing inflow” of ammunition, weaponry and fighters from the Russian Federation which “continues to fuel the conflict and it facilitates human rights abuses and violations of international humanitarian law”. According to the report, various human rights abuses are experienced by Civilians living in the zones of conflict, who are also deprived of protect, access to basic services and humanitarian aid. They are also subject to arbitrary rule and restrictions to freedom of movement.

Background on the current situation

In the spring of 2014, in the aftermath of Euromaidan protests, which were concluded with violence including the deaths of 114 people, Russia annexed Crimea. Under Russian occupation, Crimea has become a stage for systematic human rights abuses against minorities, particularly the Crimean Tatars. The on-going armed conflict in Eastern Ukraine between pro-Russian separatists and Ukrainian government forces has increased the severity and frequency of human rights violations. The conflict has so far killed more than 9,500 people.

More on Ukraine and Crimea from HRHF