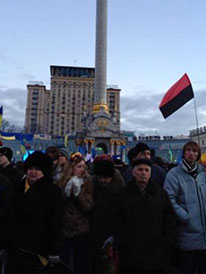 Yesterday, the Ukrainian parliament adopted a law violating most fundamental rights to freedom of expression and assembly, as well as basic rights to associate and work for a non-governmental organisation, including the right to be a human rights defender.

“The law adopted by the parliament does not only contain some restrictions, it is a complete restriction to fundamental rights, including the most basic right to express critical opinions, and it gives green light to authorities to use violence and oppress civil society,” says Ane Tusvik Bonde, Human Rights House Foundation’s Regional Manager for Eastern Europe and Caucasus.

As a reaction against the peaceful protests and the assemblies throughout the country, the majority of the parliament indeed adopted the law Nr 3879, introducing multiple restrictions on the rights to freedom of expression and assembly, as well as basic rights to associate and to the space of civil society in general, including by introducing “foreign agent” regulations inspired from legislation from the Russian Federation.

The participation to peaceful protests without prior authorisation can be punished with a penalty of 1’700 to 3’400 UAH (about $200 to $400) or an adminstrative detention of 10 days. Mass riots can be punished with up to 10-15 years imprisonment. The possibility to set up tents, stages, or even a sound system, without the permission of the police would be punishable up to 15 days in jail. To participate to blocking someone’s access to a residence ban be punished with up to 6 years in jail. “These new elements can target any and all Maidan square protestors,” says Oleksandra Matviychuk from the Centre for Civil Liberties. “Their aim is not to ensure public security but to create a climate of repression de facto banning the right to freedom of assembly.”

NGOs participating in so-called political activities will have to receive a special permission form the national authorities in order to operate and to receive funds. Furthermore, any NGO receiving funding from abroad will be considered as foreign agent and will hence be obliged to register as such. “These measures are inspired from legislation of the Russian Federation,” underlines Ane Tusvik Bonde. “They constitute a violation of the right to freedom of association and restrict the right to be a human rights defender.”

Severe restrictions are also imposed to the right to freedom of expression, banning the production, possession or dissemination of so-called “extremist materials,” including through the media and the Internet. Additionally, the law puts in place a legal framework to control and limit Internet access, including the government’s right to discretionally control the access and distribution of Internet resources. Furthermore, information agencies operating without a special license from the government will face fines and confiscation of servers, computers and any relevant information. Amongst the other severe violations of the right to freedom of expression, the law re-criminalises slander and defamation – now punishable with imprisonment up to 2 years.

The legally justifiable willingness to limit the expression of hate speech, as foreseen in article 10 of the European Convention for Human Rights, has brought Ukrainian lawmakers to ban so-called “extremist activities”, in line with the ban of “extremist materials.” However, article 110 of the law defines extremist activities as “any unlawful interference with or obstruction of the activities of public authorities, local governments, other government entities.” “To consider any activity voicing opposition to any authority in the country as extremist is instituting a total control of society and violating the core of the principles of a democratic society,” says Ane Tusvik Bonde.

The law also protects authorities violating human rights. “A special protection is offered to law enforcement agencies, including the “Berkut” police, and to the judiciary,” says Vadym Pyvovarov, Executive Director of the Association of Ukrainian Human Rights Monitors on Law-Enforcement. Indeed, under the revised article 134 of the Law on the Status of Judges and the revised Law on Information Agencies, crimes committed by law enforcement forces are now protected by a complete immunity, whilst it will be illegal and punished with up to 3 years imprisonment to collect any information about “Berkut” police special forces employees, judges and other similar government workers.

The emergency by which the law was rushed through parliament highlights its aim to restrict space of civil society and silence critical voices.

Expresses concern over beatings of journalists

In their joint letter of 17 January 2014 to President Viktor Yanukovych, members of the Human Rights House Network (HRHN) call upon him to veto a law adopted by the parliament on 16 January 2014 violating most fundamental rights to freedom of expression and assembly, as well as basic rights to associate and work for a non-governmental organisation, including the right to be a human rights defender.