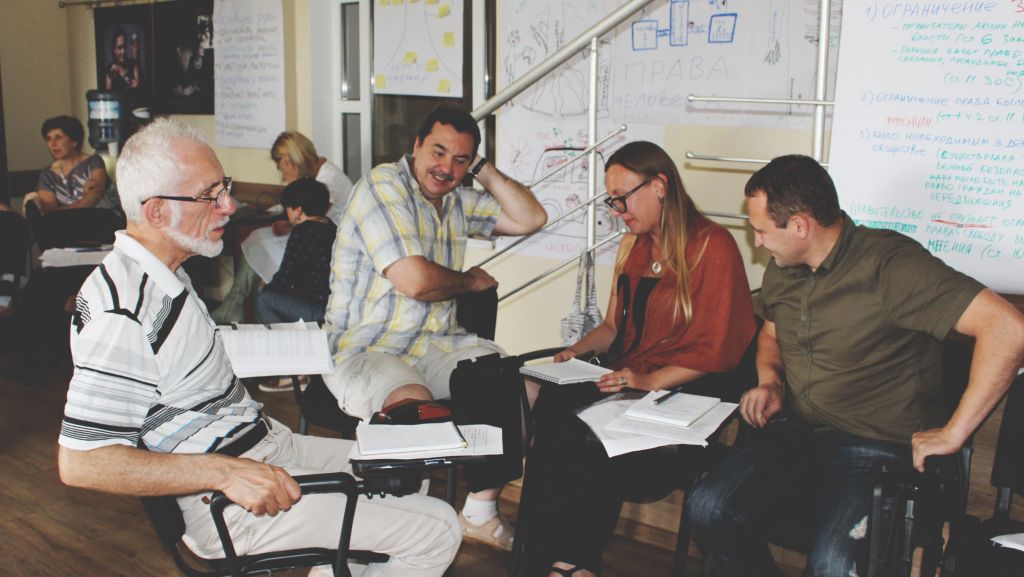 The seminar focused on methods to effectively use international law within the national legal system of Belarus. Some 22 participants worked with Belarusian and international experts to identify and learn how to utilise the opportunities provided principally by UN human rights mechanisms, but also some European and Belarusian mechanisms.

Civil society in Belarus continues to develop, despite a lack of political change

The BISH program focuses on the universality of human rights and on Houses and partner organisations implementing universal human rights “back at home,” despite specific problems in Belarus.

“Public interest in the protection of human rights has grown, as shown through increased competition to participate in the IV cycle of the program. The chosen participants differ from some of their predecessors who initially aimed to apply emergency, rapid methods to change the political regime in the country. Today, people understand that change is an evolutionary process in which a lot depends on how they overcome stereotypes and change attitudes within society. The desire to invest time in self-development is also important sign for civil society.”

“Instead of endeavoring to write as many appeals as possible to international bodies, modern Belarusian human rights defenders tend to prepare compelling documents, recommendations, or statements and address them to national courts and different institutions of the Executive Branch at the national level. It is the beginning of interaction, and this offers the authorities an opportunity to make the needed changes “at home.”

Bringing human rights in Belarus to the international level

Aleh Aheyeu, Head of the Legal Center of the Belarusian Association of Journalists, the coordinator of the project, commented: “The program has taught people to use international mechanisms to defend violated rights, enabling them to bring to the international level the entire scope of the problems with human rights in Belarus. We strive to ensure that the project participants are motivated, aware of the values of human rights, and willing to promote and protect them.”

Today, Belarus is among the leaders in the amount of considered individual complaints regarding violations of individual rights by the state to the United Nations Human Rights Committee, and it is monitored by a UN Special Rapporteur on Belarus.

Ales Bialiatski, Head of Human Rights Center “Viasna” and expert of the project, commented: “Such programs are important for the formation of the Belarusian human rights community to set and carry out tasks at the international level. We are not on the margins of civic events in Belarus, but rather on the contrary are their active participants. Belarusian human rights defenders now have to be considered both by opposition political forces and the government. We force them to do so with our activities and it is important to keep this rather high level.”

Leanid Marozau, lecturer of International Law Department of the Belarusian International University “MITSO” and participant in the training session, commented: “One may keep hope alive that in a certain moment civil society will wake up and become responsible for itself. But as history shows, first there are individuals who make efforts to protect society, and then the society becomes conscious. That’s why at least the minimum number of people who are willing to protect the public interest should be prepared and trained.”

During the past decade, BISH has prepared about a hundred people who can work for the defense and promotion of human rights. It is a powerful source of skilled professionals, a good professional backbone, and a place for networking among graduates.

While in Kyiv, the participants also had the opportunity to visit several Ukrainian public human rights institutions, which are absent in Belarus.

“The day in Kyiv has had a positive effect on my perspective, particularly visiting the Office of the Ombudsman. In Belarus, there is no such state institution, although its introduction has been discussed for about 10 years. Also, we have been to the Ministry of Justice and the Government Agent for the European Court of Human Rights. This practical example has shown how similar institutions can be built in Belarus.”

In addition to lawyers and activists of non-governmental organisations, the participants of the project now include bloggers, and for the first time non-lawyers and lawyers are learning together in the same group.

Margarita Korbut, a participant of the seminar, commented: “Joint work of professional lawyers and human rights defenders without legal education was a new experience for me. Trainers tried to give us not only deep factual knowledge and skills but also attempted to create working teams, able to interact successfully and efficiently complementing each other. I think the interaction of different groups has a positive impact on results of the project because non-lawyers will give lawyers a little of recklessness and creative mood and lawyers, in their turn, will help all others to think more structurally.”

Ulyashyna commented: “Those who work with human rights, regardless of affiliation to a particular professional group – journalists, lawyers or sometimes doctors and teachers – themselves can often be under threat. Society often shows no understanding for them, and governments frequently declare them as enemies. BISH raises awareness and develops the skills and knowledge of these persons.”

The Human Rights House Foundation’s ILIA programme aims at protecting and advancing human rights in Eastern Europe and the Caucasus. It is open to lawyers and human rights defenders from Azerbaijan, Belarus, Moldova, Russia, and Ukraine.