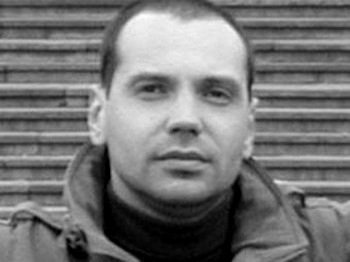 Aleh Byabenin, right, one of Belarus’s leading journalists and human rights activists, and among the founders and leaders of charter97.org website, has found dead in his summer cottage not far from Minsk. Contrary to suggestions that Byabenin must have committed suicide, no suicide note was found and no other possible indicators suggest the same. 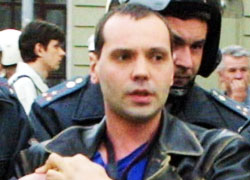 As one of the leading lights of human rights organisation Charter97, Byabenin had been harassed by the authorities on numerous occasions, according to Index on Censorship information.

Almost killed before
In April 1997 he was abducted, reportedly by the KGB, and in September 1999, he was nearly beaten to death by far-right thugs with links to the KGB.

Byabenin ran the Charter97 website, which is the leading non-state source of news and analysis in Europe’s last dictatorship. It comes just 2 months after the implementation of Decree No. 60 a law that strictly regulates the use of the internet in Belarus. Mike Harris, Public Affairs Manager of Index on Censorship, who is currently in Belarus said:

“People in Minsk are very nervous, especially those close to Aleh. No suicide note was found, and Aleh just hours before his death had made phone calls to arrange a trip to the cinema with close friends. In recent months he had become increasingly concerned over the safety of fellow human rights activists and feared a return of the atmosphere of 1997-1999, when many dissidents disappeared in suspicious circumstances, and Aleh himself was nearly killed.” 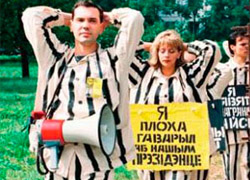 “The Presidential election must take place before February next year. The screw is tightening on human rights organisations, with arrests and mock executions of youth activists. This death has sent shock waves through civic society across Belarus. “I was supposed to meet Aleh today to discuss human rights violations in Belarus. His death is a real blow.”

“There is a wide gap between the time of death indicated by experts, and what is recorded in the documents. Policemen and staff at the prosecutor’s office, including a forensic expert, who arrived to the summer house yesterday, documented that the death occurred around 2 p.m. on 3 September. In the certificate of death issued to the family today, the date of death is September 2. That means, a gap of more than 15 hours. ” According to Bandarenka, Aleh cherished his little son. He was found in a noose made of a rope from a child’s hammock. Such thing is simply impossible. People who saw Aleh on the day before, said that he was cheerful and energetic, and planned to go to the cinema.

“There are lots of other circumstances which make us doubt that Aleh departed out of this world of his own free will,” Bandarenka continued. “I would like to say that Aleh was not simply a journalist. In a possible Belarusian presidential campaign he was to become one of the leaders of the headquarters of the oppositional candidate for presidency Andrei Sannikov. And all of a sudden the person commits suicide. There is no motive for such behaviour. There is no suicide note. There were no problems at work, he has a dearly loved wife, sons, parents, a brother,“ added Bandarenka.

Editor receives threats
Following a commentary she wrote on the death of Byabenin, Sviatlana Kalinkina, the Chief-Editor of Narodnaya Volia independent newspaper, received a postcard with threats to her life. She found a postcard in her mailbox telling her to “Live in fear. The hunt after traitors has started. One more article like this and you will be pissed up,” the text of the postcard goes.

“The card was not posted, but it was just put into my mailbox as a hint that senders know perfectly where I live,” Sviatlana Kalinkina explains. “No particular article I am ‘warned’ about is mentioned, but it is clear it has been done not only to intimidate me personally. Today, after Aleh Byabenin’s sudden death, the circumstances of which leave a lot of questions, this is not an attempt to intimidate me personally, but activities aimed at creating an atmosphere of tension and fear both in the journalistic community and society as a whole.”

Background
In the last year, Charter97 has been subjected to constant intimidation from the authorities. On 6 December 2009, Yauhen Afnagel, a youth leader, was kidnapped on the streets of Minsk and taken to the countryside to face a mock execution. Afnagel was told to stop asking questions of the authorities. In a period of only two months, six youth leaders were kidnapped and subjected to mock executions. On 16 March, Aleh Byabenin had his computer confiscated as part of an indictment in a criminal libel case brought by a former KGB officer.

HRH London, based on Index on Censorship and Charter97.org information.

Belarus: harassment of media grows in run-up to presidential election