Home
/
Latest
/
6 years of prison for a national flag
Articles

6 years of prison for a national flag

The activist of Republic of Belarus National front party Siarhei Kavalenka from Viciebsk (city in north Belarus) is under risk to be convicted for up to 6 years of prison. He is accused of public violence under the article 339 of Criminal code of Republic of Belarus. The reason for criminal case was a national flag which he hanged in city center.

History of one action

On January 7 on the top of main Viciebsk Christmas Tree appeared the national white-red-white flag of Belarus. In the eyes of hundreds of people the flag was taken off by the fire-service officers. The member 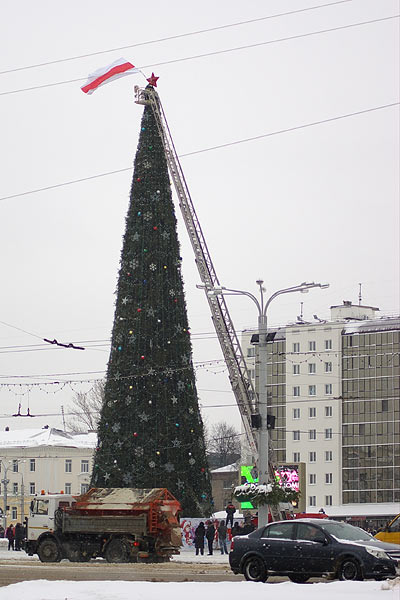 of BNF Siarhei Kavalenka (Belarus national front) was arrested in a short time after. From the police car he managed to call the journalists and said that the flag was pointed out in the honour of Christmas celebration.

The national flag is considered illegal by the Government of Belarus, as the official Belarusian symbols are still almost the same as in Soviet times.

The criminal case against Kavalenka was started according to the Criminal code article 339, which outlines the punishment for “public violence, which was undertaken second time or by the group, or flowed by the attack against those who try to stop the action”. During the time when Siarhei Kavalenka was arrested, his flat as well as flats of his friends and the party office was checked by the police. The activist was freed with no possibilities to go away of the city after spending several days in prison.

Siarhei Kavalenka (on the photo) is quite sure that he was released only because the wide public debate of his action took place. The local officals undertook their own specific public campaign. On the 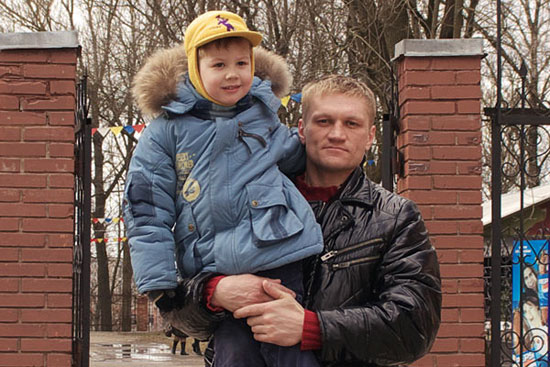 second day after the flag was put out, all city official newspapers printed an article, where the action of Kavalenka was compared with vandals, who destroy public infrastructure and paint walls. The newspaper “Vitebsky rabochy” even named Kavalanka “a mutant”.

At the same time the deed of Siarhei Kavalenka was a kind of mobilisation act for civic action in the Viciebsk region. On January 11, the meeting of public committee in support of arrested Kovalanka took place. In the committee there are represented different democratic forces and non-governmental organisations.

The date of the court is not known so far. Siarhei Kavalenka is at risk to be punished for 3 and up to 6 months of arrest, or 5 years of limitation of freedom, or imprisonment for up to 6 years. Siarhei Kavalanka was arrested and fined several times for protests with national flag in the past.