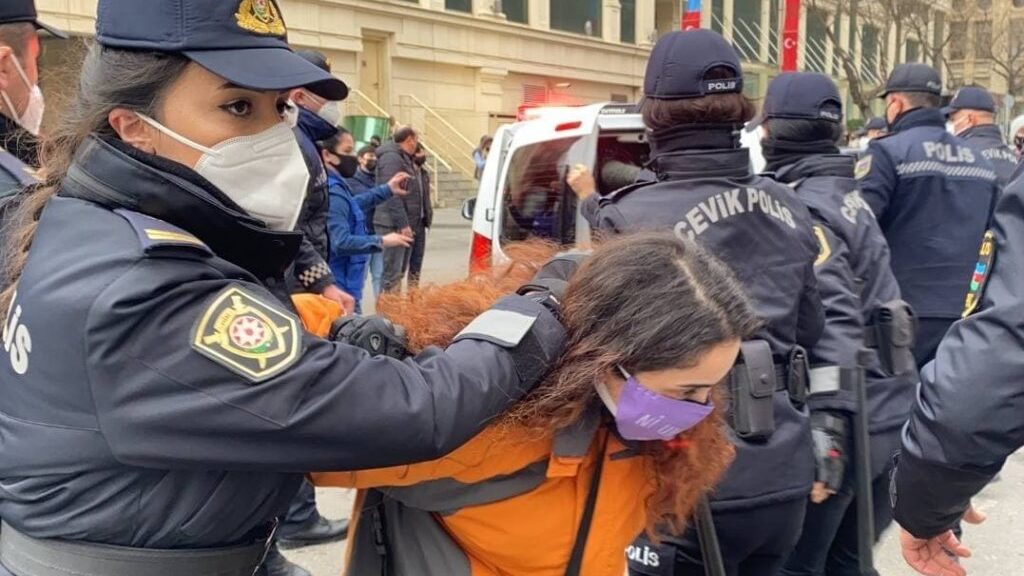 Human Rights House Foundation condemns the latest attacks against women human rights defenders in Azerbaijan, including the abhorrent practise of targeting their privacy. The actions of the Azerbaijani authorities represent another example in the on-going trend of infringing on freedom of assembly and expression, and failing to protect the rights of women human rights defenders. Clearly, Azerbaijani authorities continue to ignore their international human rights obligations.

We call on the Azerbaijani authorities to immediately

On 8 March 2021 the police dispersed the women’s march in central Baku, which was meant to mark International Women’s Rights Day. Police detained at least 25 people, including human rights defenders Gulnara Mehdiyeva and Narmin Shahmarzadeh. Police dragged some of these individuals away and forcibly put them into police vehicles. Police took those detained to police stations throughout the city and released them soon after. According to local media reports, the authorities denied permit requests to march organisers and announced their intention to prevent the march from taking place.

The authorities began detaining participants even before the march got underway. This is an illegal practise that the Azerbaijani authorities have applied before (most notably against two opposition leaders in 2019 and 2020). Police detained at least two women human rights defenders in a cafe prior to the start of the march. Another activist was pulled from a taxi on her way to the protest. Once the march began, the authorities continued to detain women human rights defenders. The police did not explain or provide any legal grounds for detaining protesters.

The actions by the authorities point again towards the use of assembly permission requirements as a tool for systematically attacking freedom of assembly. In fact, the on-going use of such requirements has imposed an effective blanket ban on protests in the centre of Baku. The use of such permission requirements contradicts international human rights law. Moreover, the failure to obtain a permit does not authorise police to disrupt a public gathering (in fact,  Azerbaijan has already lost a similar case at the European Court of Human Rights, where the Court found the violation of the freedom of assembly, Ibrahimov and others v. Azerbaijan (nos 69234/11, 69252/11, 69335/11).