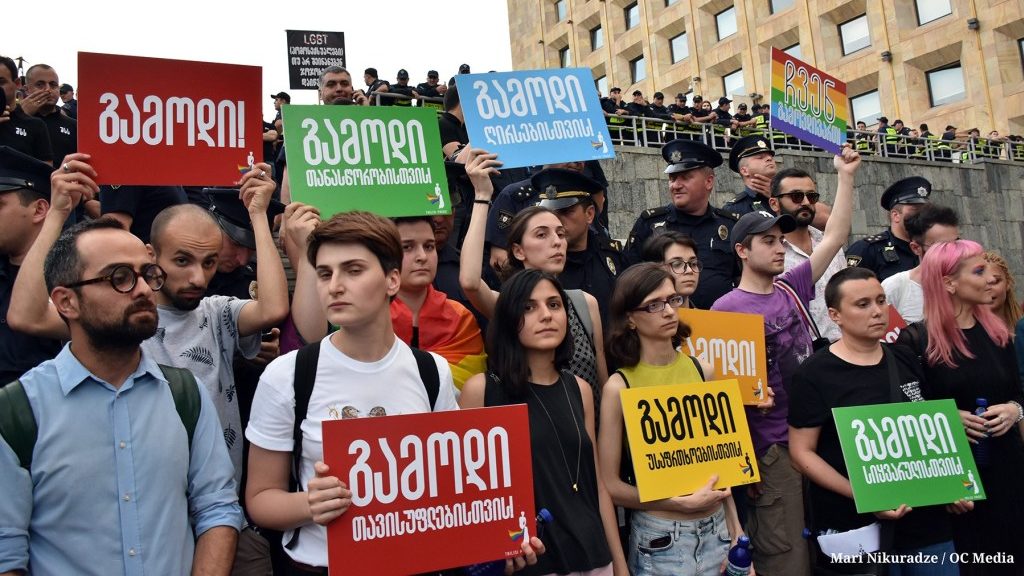 Tbilisi Pride: Protect the rights of LGBT community and defenders in Georgia

Ensure the freedoms of assembly and expression of the LGBT community in Georgia and those defending their rights, urge 37 member and partner NGOs of Human Rights Houses in a letter to the Georgian government.

Freedoms of assembly and expression of the LGBT community and those defending their rights must be ensured.

We, the undersigned  37 member and partner NGOs of Human Rights Houses are concerned about the closing public space for the LGBT community and those defending their rights in Georgia, and about flagrant violations of their rights to peaceful assembly and expression. We call upon the Georgian authorities to show commitment to the values of democracy and human rights and to protect the safety and security of all Tbilisi Pride Week and March of Dignity participants.

Despite some success in the fight against discrimination in recent years, the freedoms of peaceful assembly and expression of the LGBT community and human rights defenders is under attack in Georgia. At the beginning of 2019, organisers announced that Tbilisi Pride week would take place on 18-23 June 2019. The week consists of various cultural events as well as an international conference and the March of Dignity. According to the organisers, after a long negotiation process, the Ministry of Internal Affairs informed them that law enforcement agencies would not be defending the LGBT community’s freedom of assembly due to what they see as “increased risks and threats coming from radical groups.” Instead, law enforcement made a counteroffer to hold the event in an enclosed space.

Threats and attacks against the LGBT community have been escalating in the week leading up to Pride. On 14 June, LGBT rights activists gathered outside the Government Chancellery in Tbilisi to call on the police to ensure security at Pride. They were met by violent counter demonstrators, verbally assaulted, threatened and eventually evacuated by police officers. On 15 June, homophobic groups formed a “people’s patrol” armed with wooden sticks, and threatened Pride participants. While the Ministry of Internal Affairs opened a criminal investigation into the formation of the “people’s patrols”, it has also urged the LGBT community not to hold Pride.

The Georgian government’s response is not in line with its human rights obligations. Tbilisi Pride week presents an opportunity for the Georgian authorities to show their commitment to the values of democracy and human rights. Now is the time to prove that the authorities are both willing to ensure the rights of LGBT community to peaceful assembly and expression, and able to ensure adequate support and protection of all Tbilisi Pride week participants.

This is not the first time that the LGBT community have been unable to exercise and enjoy their rights. On 17 May 2012, on International Day Against Homophobia (IDAHO), violent religious groups disrupted a small, peaceful IDAHO Day demonstration in Tbilisi and assaulted demonstrators. During IDAHO Day in 2013, thousands of individuals and clergy physically assaulted and dispersed a small peaceful gathering marking the day in central Tbilisi. At that time the authorities, including the Prime Minister, condemned the violence and expressed a commitment to punish the perpetrators, which was a positive first step. During 2014-2018, due to physical threats from violent groups, IDAHO Day could either not be celebrated in Georgia or it was marked with brief demonstrations, which were restricted under the instruction and watch of police and by free access and free movement not being secured. On the same day, however, religious groups with sometimes violent homophobic rhetoric were able to freely demonstrate on the streets of Tbilisi.

Under the European Convention on Human Rights, states must ensure the right to peaceful assembly and expression without discrimination. Specifically, in relation to the disruption of the IDAHO Day celebration in 2012, the European Court of Human Rights found Georgia in breach of the rights of demonstrators (Identoba and others v. Georgia, No. 73235/12, 12. 05 2015). The Court noted that the officials knew about the demonstration and possible risks ahead of time, yet they failed to “sufficiently contain…homophobic and violent counter-demonstrators” and take adequate measures to “ensure that the march to mark the International Day against Homophobia could be held peacefully.” Cases emanating from attacks during IDAHO Day in 2013 are pending before the Court.

Within the United Nations Universal Periodic Review of 2015, Georgia received and accepted recommendations that enjoyed the support of fellow UN member states to “redouble efforts” in combatting violence based on sexual orientation and gender identity, fight against “social stigmatisation” of sexual minorities, and “increase tolerance and social inclusion in the Georgian society”. The Georgian authorities have a great opportunity now to demonstrate their commitment to the recommendations that they have accepted.

States should “take all measures necessary to ensure the rights and safety of all persons, including human rights defenders, who exercise, inter alia, the rights to freedom of opinion, expression, peaceful assembly,” as affirmed by the United Nations Declaration on Human Rights Defenders and the December 2017 United Nations General Assembly resolution– which Georgia has co-sponsored.

We thus call upon the Georgian authorities to take all necessary measures to fulfil their international obligations. More specifically we ask that:

Human Rights House Foundation (HRHF) protects, empowers and supports human rights defenders and their organisations. To accomplish this, HRHF brings organisations together in Human Rights Houses and unites the Houses in an international network. HRHF advocates with partner organisations to promote the freedoms of assembly, association, and expression, and the right to be a human rights defender at home and abroad, utilising its consultative status at the United Nations and participatory status at the Council of Europe. Today, independent human rights organisations work together in 16 Human Rights Houses in 11 countries. The Houses are located in Eastern & Western Europe, the Caucasus, and the Balkans. HRHF is based in Oslo, with an office in Geneva and representation in Brussels and Tbilisi.

Together with the Human Rights Houses, HRHF has significantly contributed to the establishment of the international legal mechanism for the protection of human rights defenders. HRHF has consultative status with the United Nations Economic and Social Council and the Network of Human Rights Houses has participatory status at the Council of Europe.