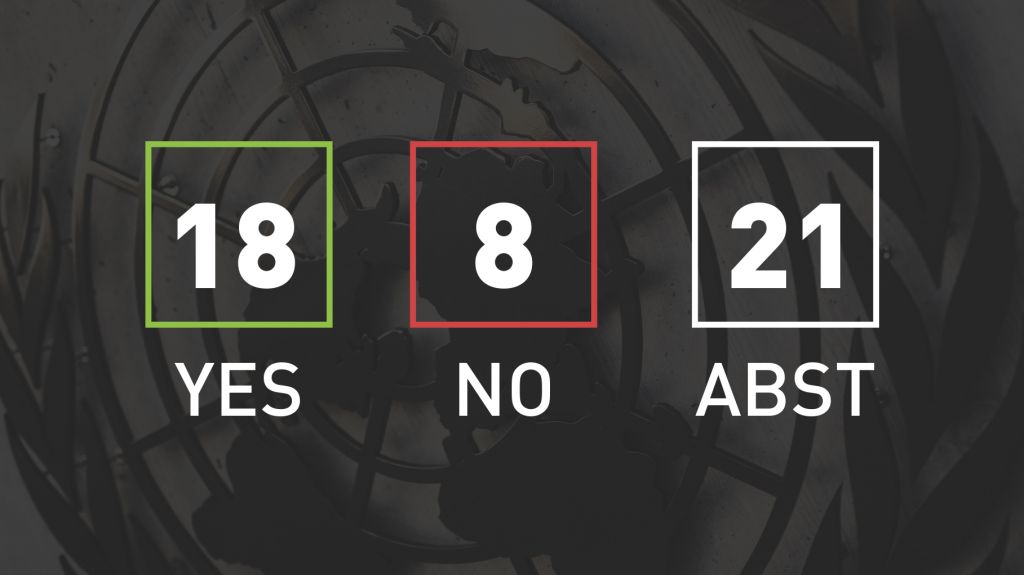 The UN Human Rights Council (HRC) has responded to the recent crackdown on peaceful protests by the Belarusian government, and to the multiple concerns raised by Human Rights House Foundation (HRHF) and its partners, by passing a stronger resolution with an increased majority from 2016 on Belarus which has also renewed the mandate of the UN Special Rapporteur on Belarus for a further year.

“It is very important for the Belarusian civil society, that the Special Rapporteur responds quickly and accurately to the problems in Belarus, and his assessments are in line with ours. The Special Rapporteur and Belarusian human rights defenders have the same system of standards, we see the situation from the same angle; we see the problems and their solutions. We still continue to expect that the state recognises the mandate and begins to cooperate with it, which would mean a clear signal about the willingness to address the existing problems in the field of human rights,” commented Tatsiana Reviaka, President of the Belarusian Human Rights House.

The Council passed its resolution with an increased majority over its vote on a similar resolution in 2016 with 18 states voting yes, 8 no, and 21 abstaining.  The vote last year had a 15/9/23 split.

Elaborating on the importance of the mandate to Belarusian civil society, Tatsiana Reviaka highlighted that it is the only international instrument for monitoring the human rights situation in the country: “We are unable to use the regional system of protection, as Belarus is not a member of the Council of Europe. The mandate was established as temporary and should be lifted if the human rights situation in the country improves. But this is not happening. There are no systematic changes, the situation is very unstable, and the massive repression in the spring of this year demonstrated, how rapidly it could deteriorate at any time.”

“After the crackdown in Belarus earlier in the year, targeting peaceful protestors and those observing them, and reporting about the protests, we wanted to ensure that as much as possible, the Council – and the wider UN – were briefed on recent human rights developments in Belarus, and could make as informed a decision as possible in response to the events. We particularly wanted to counter a level of confusion, that existed in the run-up to the vote on last year’s resolution on Belarus,” commented Florian Irminger, Head of Advocacy at Human Rights House Foundation.

HRHF and its partners have advocated strongly for the renewal of the mandate in the run-up to and during the session. Together with Belarusian Human Rights House and partner NGOs, we held meetings with 10 EU Member States in Brussels and over a dozen HRC Member States in Geneva to update them on the latest developments. Written briefings were sent to all Council Members as well as joint NGO letters in partnership with prominent international human rights organisations. HRHF and partners also sent a joint NGO letter to EU Member States in April.

“Belarus now, more than ever, must reconsider its policy of non-engagement with the United Nations, start a process of engagement with the Special Rapporteur, and establish a framework for genuine reforms of its domestic human rights situation,” concluded Florian Irminger.