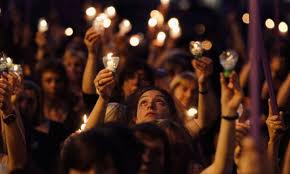 In cooperation with local activists, the Norwegian Helsinki Committee has submitted an alternative report to the Committee on the Elimination of Discrimination against Women’s (CEDAW) 53 Session on 11 October, where Turkmenistan will be heard in Geneva.

The report outlines the challenging conditions for women in the closed country, where women are subject to extensive discrimination in the labour sphere and society in general, and suffer from very poor healthcare services.

The alternative report gives a picture in stark contrast to the rather positive evaluation of the situation of women to be found in the report submitted by the government of Turkmenistan in March 2011, available here.

The local authors of the report have carried out impressive research under difficult circumstances – severe repression of independent civil society and lack of reliable official data. The NHC will also be present in Geneva to present the report.

Domestic violence against women widespread but hushed up Violence against women is in fact quite widespread, but the national mentality finds it unacceptable to talk about such things. Meanwhile, women subjected to violence or harassment have nowhere to turn, and there is no one who can protect them. It is evident that a woman in such a situation will never tell anyone about what is going on, and will try to hide incidents of violence convincingly. In addition, the public opinion considers it embarrassing and shameful to “carry the garbage out of the hut”, as the Russian proverb goes.

The public opinion, based on national mentality, traditions and customs, sees nothing wrong in this practice and praises a woman who is enduring and patient.

Furthermore, the public opinion is more likely to blame the woman for the violence than to pity her, not to mention help or protect her. A woman victim of domestic violence will more often be left on her own with her problems, and even relatives, including sometimes the parents, will not only refrain from helping her, but will also aim to stay away from interfering in the situation at all.

Participation in politics a distant goal for women According to official numbers, Turkmenistan’s president was elected with 97% of the vote in February 2012. The country had one party until recently, when the additional Agrarian party was created by the President. Core opposition politicians are in exile or in prison, and what is left of civil society is under strict control by the government and security services. The practice of collective punishment silences any criticism.  Under such circumstances genuine participation in politics is a distant goal for any citizen in Turkmenistan, not to mention for women. Even participation in organisational life is difficult. Turkmenistan has an abundance of secret orders that are strictly followed and obeyed, unlike the official laws. For example, women are not allowed to freely organise in women’s organisations, as not one women’s organisation has been registered. It is not acceptable for an organisation to work without registration as it is considered illegal and harsh measures are undertaken if such activities are discovered.

All public women’s organisations and groups for some reason have to be registered under the auspices of the Women’s Union of Turkmenistan named after Kurbansoltan-Eje as departments in the framework of this organisation. The Women’s Union exists merely pro forma, calling itself a civil society organisation, but in fact being a specifically created state structure. All appointments to this organization are made only after informing and receiving approval from the authorities. The mandate and all its activities are approved in a similar way. This so-called civil society organisation is financed by the government; its expenses are included in the state budget, as reflected also in the state media.

The authorities are reluctant to allow any independent women’s organisations working in the country, as it would be harder to control them. In addition, independent organisations would facilitate a growing self-realisation amongst women, and activation of the female population in defence of their rights and interests.

Women of ethnic minorities suffer from twofold discrimination – both as women and as members of a minority group. For women who represent ethnic minorities any higher education in any Turkmen university is out of reach. They are simply not accepted to studies because they are not Turkmens. The background is a secret order that has been strictly enforced for many years. Turkmen is the only language of instruction, and if you return to Turkmenistan with a diploma from abroad, you have to take an oral exam in Turkmen as part of the approval process.

The few women who do enter higher education institutions are not allowed in if they are not dressed in national Turkmen dresses. A woman does not only have to be dressed in the Turkmen national dress, but her head should also be covered with a scarf, and if it is a girl, she has to wear the national embroidered skullcap takhya. Dressed any other way, no unauthorised persons or even students are allowed to appear in the university. The male students are not forced to wear national dress, like the national trousers balaki, Turkmen folk-shirt with the appropriate embroidery, robe, the skull-cap on the bald head and finally the sheepskin cap-telpek.

For women in general it is difficult to obtain a position in any government organ, institution or agency of power; for women who  belong to  any of the ethnic minorities it is almost impossible. There is a secret order prohibiting hiring minority women to any positions with any sort of power.

As noted above, mainly men work in such positions. If there is a choice between a woman and a man to any position, the latter would always be preferred, in addition to the preference for Turkmen nationals.