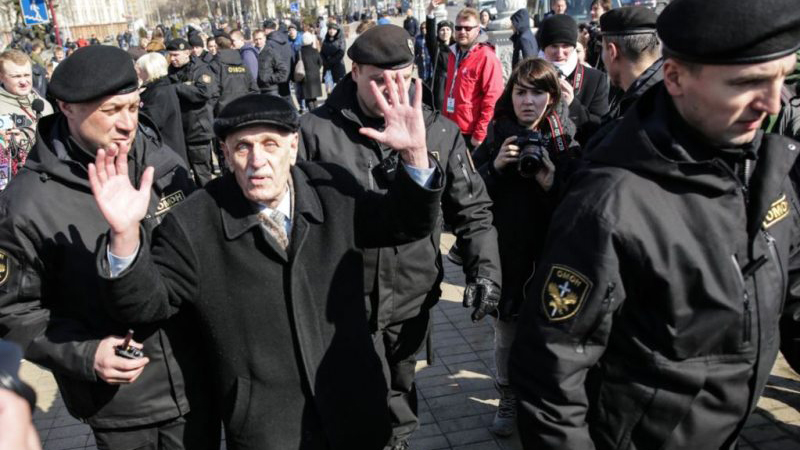 Raising concerns about the lack of progress on human rights in Belarus, the European Parliament has demanded that the European Union sets clear benchmarks in its engagement.

The European Parliament’s (EP’s) resolution, adopted on 19 April, comes as the EU shows openness toward Belarussian authorities, through a policy of critical engagement and by lifting most sanctions in recent years.

The mandate was established by the Human Rights Council in June 2012, following attacks on protesters around the December 2010 Belarusian presidential election. It is the only international instrument permanently monitoring the human rights situation in the country. Unlike other European countries, Belarus is not a member of the Council of Europe, so is not monitored by the human rights body.

The EP resolution also calls on the Belarusian authorities to take a number of steps, including releasing remaining political prisoners, suspending the death penalty, and engaging in an open dialogue with civil society and opposition.

Some 35 MEPs sent a letter to the European Commission in March, laying the grounds for the resolution. They shared their concerns about the stalemate in EU-Belarus relations and noted a lack of tangible progress with regard to human rights and democracy – despite the openness shown by the EU in the last two years.

“We share the frustration of MEPs, as increased dialogue in recent years has not led to real openings by the authorities. Belarus continues to operate on a ‘permission-based system,’ with the enjoyment of human rights depending absolutely on the will of those holding power,” commented Florian Irminger, Head of Advocacy at HRHF.

The EP resolution builds on concerns raised in 2017, when MEPs condemned a crackdown on peaceful protesters and undue restrictions on the right of peaceful assembly, freedom of expression, and freedom of association in Belarus.

“The EU needs to continue to make clear to the Belarusian authorities that relations will only improve once key systemic changes take place. This can only be achieved through sustained and coordinated international pressure in which all EU institutions play their role, while taking a strong leadership at the UN Human Rights Council to ensure the renewal of the mandate of the special rapporteur,” commented Irminger.

In March, the Belarusian authorities once again disrupted annual events marking “Freedom Day” – a day often marked by demonstrations against the government. This year, the authorities took significant pre-emptive action ahead of protests on 25 March, with mass detentions during as well as ahead of peaceful protests.

A civil society statement signed by 11 Belarusian human rights organisations “condemned the pre-emptive detentions of activists throughout the country,” and called on the authorities to release any detained activists and “put an end to the practice of pressure, detention… of participants in peaceful assemblies.”

The special rapporteur on the human rights situation in Belarus, Miklós Haraszti, in response to the events in Belarus, said that “the authorities in Belarus again massively violated the right of citizens to assemble peacefully in the capital, Minsk, and elsewhere in the country. This shows both a symbolic and practical rejection by the country’s President for any progress on human rights.”

During the EP plenary debate, MEP Charles Tannock (ECR/United Kingdom) stated: “Freedom Day… is actually a kind of litmus test for the state of democracy in Belarus. I’m afraid that 2018, which is the first year that Lukashenko has permitted such formal celebrations, has provided no surprises.”

Despite the release of prominent political prisoners in 2015 – which triggered the lifting of most EU sanctions – new arrests on politically motivated charges continue to be the norm. In particular, civil society activists Mikhail Zhamchuzhny and Dzmitry Palienka remain behind bars. The EP calls strongly for their release in the resolution.

MEP Claire Moody (S&D/United Kingdom) said: “We want to see a roadmap for EU-Belarus relations with clear benchmarks so progress can be measured effectively. We should continue to provide support and financing for human rights defenders and civil society organisations in the country, and we must condemn breaches of these basic principles as well as fostering people-to-people contacts.”

HRHF is undertaking another advocacy round this week in Geneva, in conjunction with the review of Belarus at the UN Committee against Torture, a mechanism composed of independent members. The UN Human Rights Committee, another expert body of the UN that reviews compliance with the International Covenant on Civil and Political Rights, is set to review Belarus in October 2018. The last time that Belarus was reviewed by the Human Rights Committee was in 1997, based on a report submitted by Belarus in 1995. Alexandr Lukashenko assumed office in July 1994, as President of the Republic of Belarus.

In April 2017, the European Parliament adopted a resolution condemning the crackdown on peaceful protesters and undue restrictions on the right of peaceful assembly, freedom of expression, and freedom of association in Belarus, and expressing concern over a new wave of repression.

In November 2016, the EU Parliament maintained its principled position in a resolution on Belarus.

More on arrests and attacks on peaceful protestors in Belarus

More on special rapporteur on Belarus

Human Rights House Tbilisi sent a letter to the government of Georgia, urging support at the June 2017 session of the Human Rights Council for the renewal of the UN mandate on Belarus.