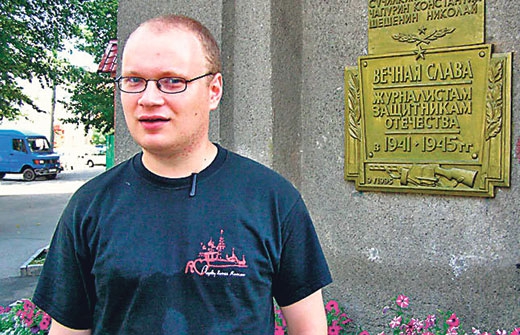 Freedom of expression organisations condemn two attacks on journalists in the Moscow region and call on Russian authorities to ensure protection for journalists. Both victims, Oleg Kashin and Anatoly Adamchuk, have covered a contentious highway project that would go through a forest in the Moscow suburb of Khimki. Kashin worked on a number of other sensitive subjects as well.

Oleg Kashin is a journalist of the business daily „Kommersant“ and Anatoly Adamchuk is of the independent weekly „Zhukovskiye Vesti“.

Kashin and Adamchuk hospitalized
On 5 November Oleg Kashin was attacked outside his home.  He is currently hospitalized and in an induced coma due to the severity of his i

njuries. On 8 November Anatoly Adamchuk was assaulted and is suffering a concussion.

Kashin, 30, was returning home from a Moscow café around 1 a.m. Saturday, when two unidentified men attacked him outside his home, according to local and international news reports. The assailants, who were apparently awaiting Kashin’s return, struck him repeatedly with a heavy object, possibly a metal bar, according to press reports. (The Moscow-based news website “Lifenews”, published a graphic video of the attack that was taken by a nearby surveillance camera.)

The attackers did not take any of Kashin’s belongings, and fled the scene after a neighbor arrived on the street, “Kommersant” reported. Kashin was hospitalized with a broken skull, jaw, fingers, and leg; he remained in a medically induced coma today.

Kashin’s reporting on the highway project had drawn threats from the pro-Kremlin youth group Molodaya Gvardiya (Young Guards). In August, after Kashin reported on anti-highway protests, Molodaya Gvardiya published a column on its website headlined “Journalist-Betrayers Should Be Punished” along with an image of Kashin that was stamped, “He will be punished.”

The column was removed by Saturday; Molodaya Gvardiya said it was not responsible for the attack. Kashin had also recently criticized the governor of Pskov Region, Andrei Turchak, on his personal blog.

In a separate case

, at least two men beat Adamchuk, a journalist with the independent weekly “Zhukovskiye Vesti”, outside the paper’s offices in Zhukovsky early today, the independent news website “Lenta” reported. “Lenta” said the assailants approached Adamchuk from behind, knocked him to the ground, and repeatedly struck and kicked him. Adamchuk was hospitalized with a concussion; only a flash drive went missing after the attack, news reports said. Like Kashin, Adamchuk had covered protests against the building of the highway in Khimki.

Appeal to President
The attack on Kashin prompted Russian journalists and media workers to appeal to Russian President Dmitrii Medvedev for more protection, and for full and thorough investigations into assaults on journalists.

“The Russian authorities must stop this chilling trend of journalists being attacked with impunity,” said John Dalhuisen, Amnesty International’s Deputy Director for Europe and Central Asia.

“These fresh assaults should not be left to join a long list of unsolved crimes against journalists and civil society activists. They must be investigated, and those responsible brought to justice, including any people who ordered the attacks,” said Dalhuisen.

Environmentalist attacked with baseball bats
An attack on Thursday also drew attention. Konstantin Fetisov, a Khimki environmental activist, was beaten by at least two assailants armed with baseball bats. He remained in an induced coma today. In a scenario similar to the Kashin beating, the attackers were waiting for the activist outside his apartment building in Khimki, local and international press reports said.

Two years ago this week, Khimki newspaper editor Beketov was brutally beaten in his own front yard by unidentified assailants who broke his skull, legs, and the fingers of both hands; he had to have one leg and seve 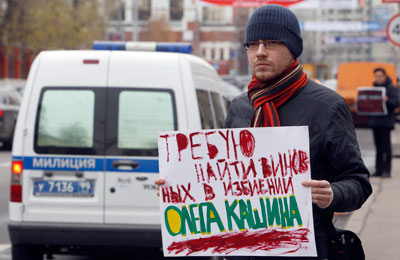 ral fingers amputated and, having undergone eight surgeries, was still left without the ability to walk or speak.

Beketov had reported on and campaigned against the same highway project-started and sponsored by Khimki Mayor Vladimir Strelchenko. While the investigation into the Beketov attack is “suspended for lack of suspects,” Strelchenko is suing the disabled Beketov for criminal defamation in a Khimki court. Beketov had blamed Strelchenko for an earlier attack, an assertion the mayor denied.

Protection to journalists needed
Amnesty International is supporting Russian journalists’ appeal to President Medvedev for increased protection, thorough investigations into unsolved attacks, and full implementation of Article 144 of the Russian Penal Code, which criminalizes the obstruction of the lawful professional activity of journalists

Unsolved attacks on journalists in the Russian Federation include the 2006 murder of Anna Politkovskaya, and a 2008 attack on journalist and defender of the Khimki forest Mikhail Beketov that left him permanently disabled.

HRH Bergen, based on Amnesty International and Committee to Protect Journalists information. See the original articles here and here.

Is Medvedev’s Russia moving towards democracy?

-Human rights are also on the agenda, Mr President