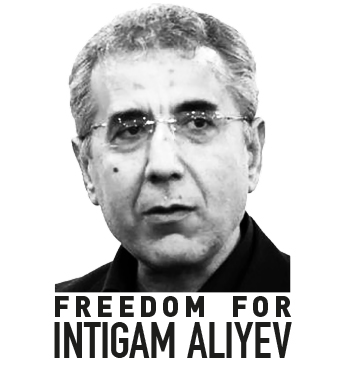 Prominent lawyers call for the release of Intigam Aliyev

95 lawyers from 24 countries call for the immediate and unconditional release of human rights lawyer Intigam Aliyev. He has been in jail in Azerbaijan since 8 August 2014.

In a letter to President Ilham Aliyev, independent lawyers, barristers or attorneys-at-law, express concern over the sentencing of their colleague, human rights lawyer Intigam Aliyev: “We call upon you, Mr President, to immediately and unconditionally release Intigam Aliyev and rehabilitate his civil and political rights.”

After six months in detention on spurious charges Intigam Aliyev was sentenced to seven and a half years in prison.

“We identify with Intigam Aliyev”, the lawyers write, “because we believe everybody should have a right to a fair trial, just as he does. Yet, Intigam Aliyev’s trial was marred by procedural irregularities and violations of the right to a public hearing and the right to access the files and documents of the case.” In addition, Intigam Aliyev’s attorney managed to prove that he was not guilty of implementing projects without registration, which he was charged with.

All 95 lawyers express their sympathy for Intigam Aliyev, as a unique lawyer. Not only is he a teacher for a generation of young Azerbaijanis, but he is also an expert of the European legal system, one of the first Azerbaijani lawyers to utilize the European Court of Human Rights and the regional tutor in the Human Rights Education for Legal Professionals (HELP) programme of the Council of Europe.

The lawyers include colleagues of Intigam Aliyev, from various Eastern European countries, from within the Human Rights House Network project International Law in Advocacy, of which he is the national expert in Azerbaijan. The signing lawyers also include lawyers invested in human rights, from the United States and Canada, Egypt or Iran, as well as Western European countries. Intigam Aliyev receiving the Homo Homini Award on 4 March 2013 in Prague from the hands of at the time Minister of Foreign Affairs Karel Schwarzenberg.

Florian Irminger, Head of Advocacy at the Human Rights House Foundation, underlines the importance of supporting human rights defenders in Azerbaijan: “The imprisonment of Intigam Aliyev is part of a systematic crackdown on human rights in the country. Arbitrary detention has been used to silence critical voices in Azerbaijan for years, whilst at the same time they exhibit a modern state through major international events. This letter and attention from around 100 lawyers from three continents witness that the outside world are not fooled by the promotion.”

In their letter, the lawyers highlight that the detention conditions of Intigam Aliyev have an impact on his already poor health:

“He suffers from severe chronic headaches in addition to nerve pain and has reportedly been denied of appropriate health care to date.” In their letter, the lawyers urge the Azerbaijani authorities to respect “basic humanitarian principles” and ensure that Intigam Aliyev is receiving “complete and necessary treatment for all medical concerns.”