Home
/
Latest
/
Photographer in Azerbaijan detained for his professional work 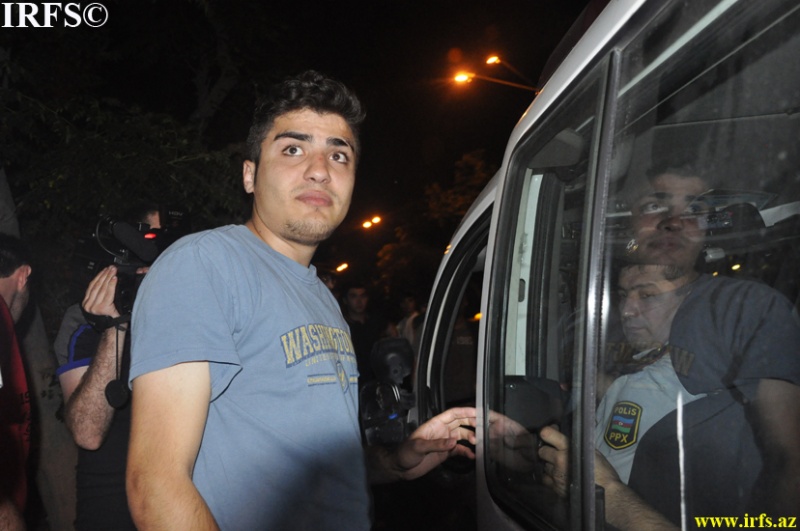 Photographer in Azerbaijan detained for his professional work

The photographer Mehman Huseynov was summoned to the Sabayil District Police station and was taken into police custody at approximately 9h on Tuesday 12 June 2012 in Baku, for 48 hours after three hours of questioning.

He is accused under article 221.1 of the Criminal Code of the Republic of Azerbaijan of hooliganism – while serving his duty as photographer reporting on an unsanctioned protest in Baku 21 May 2012.

If convicted for hooliganism, Mehman Huseynov faces up to one year of imprisonment.

The Human Rights House Foundation considers the arrest of Mehman Huseynov as a retaliation for his work as a photo- and video-journalist documenting human rights violations in Azerbaijan.

We call for his immediate and unconditional release and that all charges against him should be dropped.

The charges against Mehman Huseynov stem from a verbal disagreement that he had with police at an unsanctioned protest in front of the Baku Mayoral Office on 21 May 2012.

Mehman Huseynov was at the event carrying out his professional duties, when police used force against both protesters and journalists, including Mehman Huseynov and other IRFS employees.

The police broke the camera that Mehman Huseynov was using at the event.

Mehman Huseynov works for the Institute for Reporters’ Freedom of Safety (IRFS), a partner of the Human Rights House Network and member of IFEX.

Mehman Huseynov is a well-known videographer and photographer in Azerbaijan. His video clips and photographs documenting human rights violations are always widely disseminated throughout social media and often picked up by the local and international press.

Mehman Huseynov has collaborated with numerous international media outlets, particularly within the framework of the Eurovision Song Contest held in Baku recently.

He was also active in the campaign “Sing for Democracy”.

Already on 7 March 2011, police interrogated Mehman Huseynov and Abulfat Namazov from the Institute for Reporters’ Freedom and Safety (IRFS) for two hours, after being forced out of their car in Baku.

They were questioned about Huseynov’s Facebook account, the announced protest action on 11 March 2011 and the activities and employees of the IRFS. The police advised Huseynov to be less active on social media networks.

Furthermore, we see this arrest as a consequence of speeches by public officials calling on action to be taken against critical civil society.

Ali Hasanov, head of the socio-political department of the Presidential Administration, made a speech at the conference “The role of NGOs in the developments of civil society” on 31 May 2012 in Baku, in which he said that “ opposition activists, journalists and media outlets shouldn’t feel dared to go out to the city and they should be felt ashamed.

Public hatred should be demonstrated against them, so they do not show the destroyed asphalt to foreign journalists, but instead take these journalists to IDP camps.”

The Republic of Azerbaijan has the responsibility to take measures to ensure the protection by the competent authorities of everyone, individually and in association with others, against any violence, threats, retaliation, de facto or de jure adverse discrimination, pressure or any other arbitrary action as a consequence of his or her legitimate exercise of the rights referred to in the United Nations Declaration on human rights defenders.

In the aftermath of the Eurovision Song Contest, and as a member of OSCE and the Council of Europe, we call upon the authorities of the Republic of Azerbaijan to ensure the right to freedom of expression and of media freedom and to immediately stop harassment of journalists and human rights defenders.

We further call upon the Azerbaijani President to ensure the immediate and unconditional release of Mehman Huseynov and that all charges against him are dropped.

HRHF has sent the copy of the letter to the OSCE Chairperson from Ireland visiting Azerbaijan this week and asked him to raise the case of Mehman Huseynov with the Azerbaijani authorities.

HRHF also reminded about the imprisoned journalists and the political prisoners remaining in jail since April 2011.

HRHF also raised our concern about the amendments to the Law on Obtaining Information, that were adopted 12 June 2012, which would  severely limit the freedom of information of Azerbaijani citizens.

Huseynov was released on 13.06.12, with charges still pending. Further information: