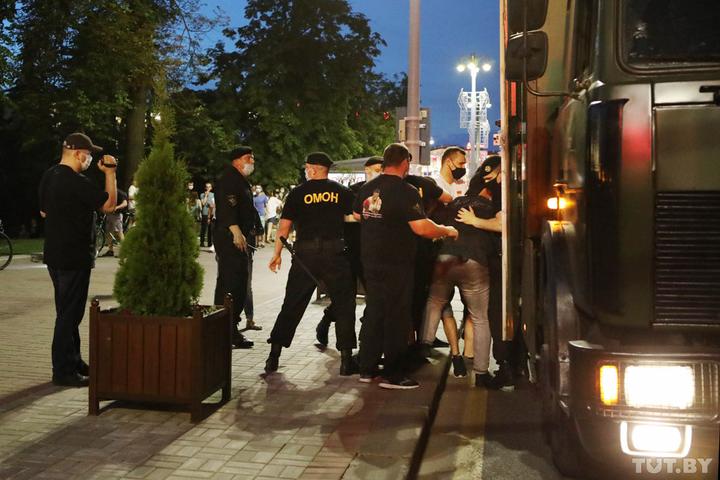 Human Rights House Foundation strongly condemns the actions in recent days of the Belarusian authorities to violently suppress peaceful protests, silence independent journalists, and intimidate members of the political opposition. These actions represent gross violations of the fundamental freedoms of association, assembly, and expression and attacks on human rights defenders. HRHF stands with the Belarusian human rights defenders, in calling on Belarusian authorities to respect fundamental freedoms and human rights, in line with Belarus’ international obligations.

Since June 18, 2020, according to Viasna, more than 200 people have been arrested and detained for participating in peaceful protests across the country. According to Belarusian Association of Journalists, 13 journalists were detained covering protests in Minsk, Mahiliou and Babruisk on June 19. All were released later the same day, except journalist Siarhei Latsinski, accused for participating in an unauthorised mass event.

These protests were in response to recent actions by Belarusian authorities to silence and intimidate the political opposition, including Viktar Babaryka, Sergei Tikhanovski, Svetlana Tikhanovskaya, Valentin Gomel, Vernonika Mishchenko, and Pavel Severinec, as well as journalists, bloggers, and other members of independent civil society. Since then, six independent United Nations experts have joined calls to urge the authorities to end crackdown on the peaceful exercise of fundamental freedoms and human rights.

In Belarus, these actions come after months of increasingly violent and repressive crackdowns on independent civil society, including journalists. In the first half of May alone, Viasna reported 120 arrests of peaceful protestors, human rights defenders and journalists. On May 29, police arrested and detained 15 people working to collect signatures in support of a presidential candidate. Of course, Belarusian authorities have a long history of periodic human rights violations generally tied to the political process. The violations, often centred around presidential election cycles, were referred to as “cyclical” by the United Nations Special Rapporteur on the situation of human rights in Belarus in 2017. Despite international recognition of these trends, very little preparation has been undertaken to mitigate risks associated with these types of crackdown by Belarus or the international community.

As Belarus approaches its 9 August presidential election, the authorities have a responsibility to ensure that all political voices are heard and everyone has the right to participate in peaceful assemblies. Journalists must be allowed to report on events in the country. Human rights defenders must be allowed to continue their work, which is critical to protecting fundamental human rights.

HRHF calls on the Belarusian authorities to: