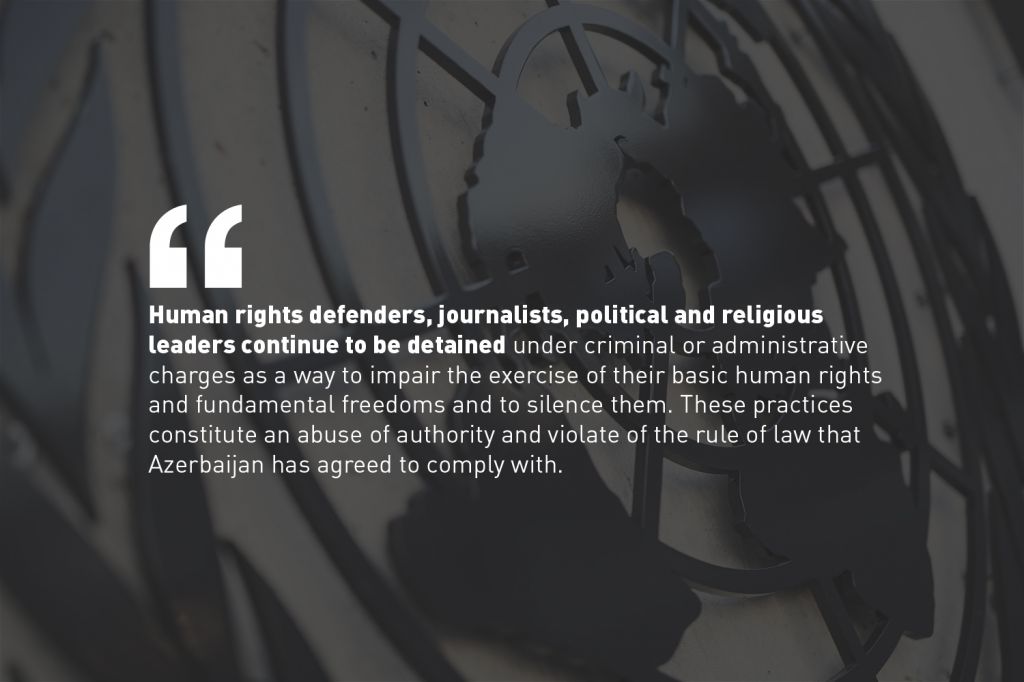 The United Nations Working Group on Arbitrary Detention made a visit to Azerbaijan between 16 and 25 May.

Their statement, coinciding with the release of Khadija Ismayil, highlights lack of significant change in the country regarding arbitrary detention.

“The Working Group holds the view that human rights defenders, journalists, political and religious leaders continue to be detained under criminal or administrative charges as a way to impair the exercise of their basic human rights and fundamental freedoms and to silence them. These practices constitute an abuse of authority and violate of the rule of law that Azerbaijan has agreed to comply with.” One of the conclusions of the statement.” –one of the conclusions of the statement issued by the working group.

Over the course of their visit, the delegation of the Working Group met with various State authorities in Baku, Ganja and Nakhchivan.

The Working Group visited 22 facilities and institutions where violations of liberty have reportedly taken place: seventeen detention facilities, including some for women, juvenile offenders, organized crimes, migrants; two psychiatric hospitals as well as institutions for persons with psycho-social and intellectual disabilities, some for women and for children.

The working group was also able to visit recently arrested student activists Bayram Mamedov and Giyasadiin Ibrahim in Kurdahani pre-trial detention facility. The pair are accused of having tagged a statue of late President Heydar Aliyev with the phrase “Happy Slave Day”. Both reported having being subjected to violent interrogation techniques at a police station before being placed by the Khatai District Court under a four-month pre-trial detention for drug-related charges. During the visit, the working group observed what seemed to be “physical sequels” of the treatment they were subjected to.

The observations presented in the statement of the working group on arbitrary detention constitute its preliminary findings which will serve as the basis of the forthcoming deliberations followed by the report that the Working Group will officially adopt and submit to the Human Rights Council at its September 2017 session.