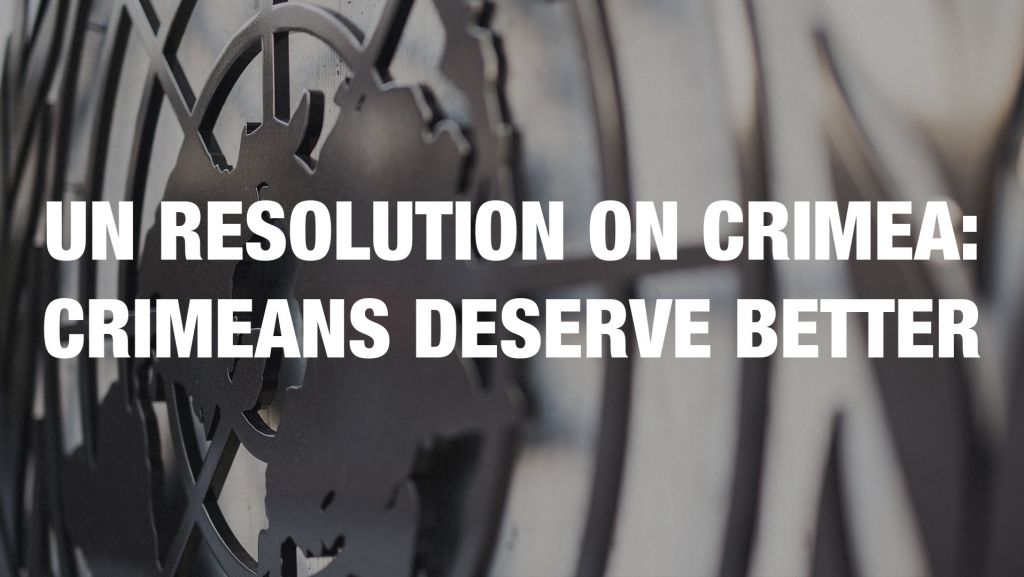 The human rights situation in Crimea will now be examined by the international community gathered in New York City for the United Nations General Assembly (UNGA).

This piece was originally published in Ukranian as an op-ed for Europeyska Pravda.

At the initiative of Ukraine, the UNGA is to vote on a resolution affirming the severity of the human rights violations committed in Crimea since the beginning of its occupation by the Russian Federation. The preliminary voting in Third committee on this resolution that was presented as a ‘big victory’ for Ukrainian diplomacy in fact reality is different.

The politicised nature of the resolution and its perception, by some, as “biased” has alienated some countries which usually supported Ukraine in votes at the United Nations, such as Botswana, Chile, Nigeria, Korea, and Senegal. The spirit of the resolution was aimed not to protect the victims of human rights abuses in Crimea but to sting Russia as painfully as possible.

On 27 March 2014, the General Assembly adopted a resolution affirming Ukraine’s territorial integrity. It underlined that the 16 March 2014 referendum in Crimea that led to the peninsula’s annexation by the Russian Federation has “no validity” and that the parties should “pursue immediately a peaceful resolution of the situation.” Since, the International Criminal Court found that the situation in Crimea is de lege an occupation. Thereafter, the Russian Federation withdrew its signature of the Court’s founding document, the Rome Statute, which it had never ratified.

The legitimacy and legality of Ukraine’s claims in regard to its territorial integrity therefore makes no doubt in anybody’s mind – except in believers of Russian propaganda.

It makes no doubt either that since the annexation, the human rights situation in Crimea has seriously deteriorated. Russia imposed its laws and justice system on the controlled area, and imposed new authorities on Crimea who conducted a severe crackdown on civil society and perceived political opponents. Much of it is reported by the United Nations, based on findings of human rights defenders and lawyers active in Crimea, whom we will not name for their protection.

Following the March 2014 General Assembly resolution, we strongly believe time has come for the international community to look into the humanitarian and human rights ruin Russia and the de facto authorities created. An NGO coalition we have been leading has called for such an action repeatedly, including at a United Nations Security Council event in New York in March 2016.

On 15 November 2016, the General Assembly committee focusing on human rights adopted a draft resolution presented by Ukraine, 73 votes in favour, against 23, and 76 abstentions. The resolution is to be considered in a final vote in New York this week. The voting is not as good as it is supposed to be; in March 2014, 100 States voted in favour of the resolution on the territorial integrity of Ukraine, 11 against, and 48 abstained.

One can only hope that Ukraine will be able to convince more States to vote in favour, such as Argentina, Armenia, Botswana, Brazil, Chile, Côte d’Ivoire, Gabon, Ghana, Mexico, Nigeria, Korea, Rwanda, Senegal, Serbia, Singapore, South Africa, Tunisia or Uruguay, because the Crimea issue is an international one, not just Ukrainian or Western European.

On the accountability level, comes the second problem of the resolution presented at the General Assembly. The focus of the resolution is on the Russian Federation and its political responsibilities, therefore mainly urging Russia “to uphold all of its obligations under applicable international law as an occupying power.” That reference includes obviously the so-called “Russian occupation authorities.”

We believe a United Nations resolution must also call upon those who in the system execute orders and hold a legal responsibility. The agents of the de facto authorities should be named and shamed and alerted that the international community is observing them, knows what they are committing, and that they will be held accountable. The resolution fails in doing so, focusing on the bigger picture, the political responsibility; Russia.

Russia should be the focus of this resolution obviously, but passing under silence the responsibility of other actors does not raise the credibility of the resolution. Ukraine is responsible for human rights situation in Crimea as well.

The resolution should have condemned past attempts at and any future willingness of civilian blockade against Crimea, it should have held Ukraine to account on ensuring that the state simplifies access for international humanitarian and human rights actors, lawyers, journalists and human rights defenders to Crimea. The resolution’s silence on the systemic discrimination of Crimean residents within Ukrainian banking system and treatment to them as “non-residents” is a missed opportunity for the international community. As well there is no mentioning in the resolution of the governmental ban to take out from Crimea to mainland Ukraine personal belongings that are not included in the list of permitted by the Cabinet of Ministers (Resolution 1035) which makes impossible for Crimean IDPs to evacuate their property when they leave peninsula.

As Ukraine has positively shown its resolve to use the multilateral institutions to face its challenges, one must now hope for a high level vote this week in New York, in order to go further in the future. The issues mentioned above must be addressed at the United Nations and “friends of Ukraine” have to hold the government to account, expect delivery on its own obligations and commitments, ask from Ukraine to do everything it can to support IDPs and the people living in Crimea, whilst clearly documenting human rights violations occurring since the annexation in order to hold the de facto authorities accountable, as well as those supporting them.

Yes, we believe this resolution, and any resolution on Ukraine at the international level for that matter, is an opportunity to set forth Ukraine’s commitments and its willingness to respond to the consequences of the occupation in Crimea – Crimean however deserves better than a blind-eye on those issues.