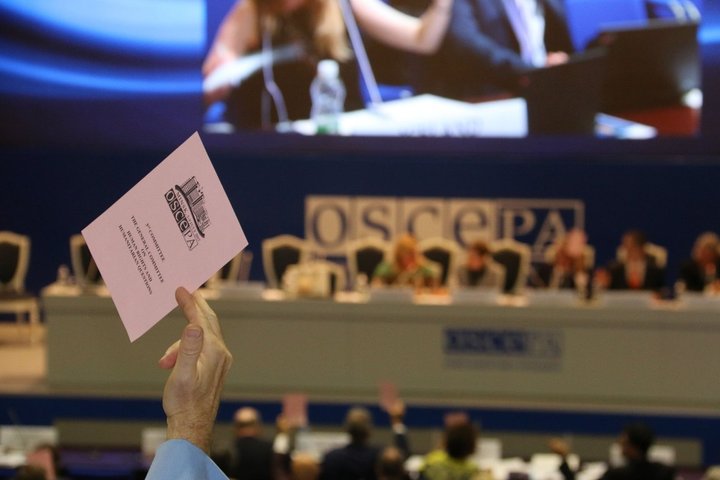 Committee on Democracy, Human Rights and Humanitarian Questions (the Third General Committee) of the OSCE Parliamentary Assembly adopted a resolution on the situation in Eastern Europe on 8 July in Minsk. The resolution contains criticism of the government of Belarus, Russia and Azerbaijan.

All paragraphs on Belarus in the document were kept, while all proposed by the Belarusian delegation amendments regarding their exclusion from the resolution were rejected during the vote.

The document expresses regret over the fact that “the nature of human rights violations in Belarus remain structural and endemic, underscored by the centralization of the legislative and executive powers in the office of the President, whose decrees are a key legislative mechanism in the country, undermining the role of Parliament,”

OSCE Parliamentary Assembly also deplores the fact that “elections in Belarus, including the October 2015 presidential election and the September 2016 parliamentary elections, have been neither free nor fair.”

The resolution expresses regret over “the restrictions placed on freedom of assembly, including a near de facto ban on picketing, demonstrations and meetings by civil society and opposition groups in Belarus”.

In addition, the OSCE Parliamentary Assembly is “deeply regretting the lack of media freedom in Belarus, including increasing instances of harassment of journalists, restrictive laws with regard to broadcasting and internet freedom, as well as selective application of justice with regard to independent journalists”.

The OSCE Parliamentary Assembly calls on the Belarusian government to “to immediately release and rehabilitate all political prisoners in Belarus, including those given suspended sentences and those whose freedom of movement has been limited, immediately and unconditionally, and to guarantee the full restoration of their civil and political rights.”

OSCE PA “Condemns the recent mass arrests in Belarus and the authorities’ violations of the right to demonstrate; condemns the adoption of a series of repressive laws in Belarus, restricting fundamental rights to freedom of assembly, expression and association, and giving additional powers and immunity from prosecution to State Security Committee (KGB) officers”.

The resolution calls on the authorities of Belarus “to implement the recommendations of the International Labour Organization with regard to trade unions, and to ensure that workers are able to freely leave their jobs, including in State industries”.

OSCE Parliamentary Assembly also urges the authorities to abolish Article 193.1 of the Criminal Code, which envisages a punishment of up to two years for “acting on behalf of an unregistered organization,” and violates the right to freedom of association, as well as other OSCE commitments.

The resolution “urges the Government of Belarus to respect its OSCE commitments with regard to freedom of assembly and freedom of expression, and to liberalize both legislation and practices, allowing citizens the right to public protest both online and offline”.

OSCE PA Urges the Government of Belarus “to immediately withdraw all issued death sentences, and to work to abolish the death penalty”, as well as “to undertake necessary measures in order to ensure that future elections will be free and fair, including the time before, during and after the election”.

The author of the resolution is Swedish MP Mr Christian Holm Barenfeld.