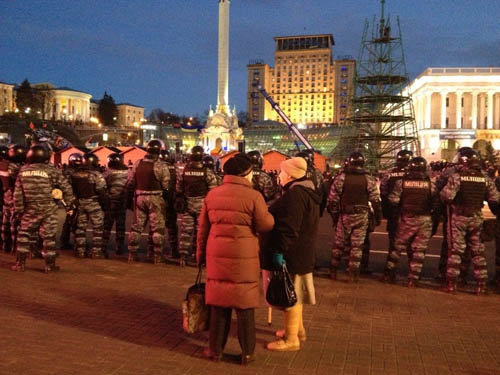 During the events on EuroMaidan, various special force units and police forces were deployed. However it was primarily the “Berkut ” riot police which used violence.

According to an analysis made by the Association of Ukrainian Human Rights Monitors on Law Enforcement (UMDPL), there were no legal grounds for deploying “Berkut” officers to protect public order during the peaceful protest in the early morning of 30 November 2013.

“Berkut” is a high-mobility unit with around 3,700 officers, which does not operate on the basis of a law but of an internal Interior Ministry order. This order is not even registered with the Justice Ministry. The order states that “Berkut” officers are used for operations involving force in difficult situations. “It is a problem as such to have an armed force of the State functioning under only a ministry rulling, but even more problematic that a force designed for exceptional and dangerous situations was mandated to control a peaceful demonstration. This highlights that the intention was to crackdown violently on the demonstration, from the beginning on,” says Vadym Pyvovarov, executive director of Association UMDPL.

Intent to hurt and harm by police

On both, 30 November and 1 December on Bankova Street, the use of force by armed officers of the State was more reminiscent of a mass execution, than a law enforcement measure, says the analysis.

Some people lying on the ground and showing no resistance were beaten by several officers at the same time. The analysis indeed shows that these people were behaving peacefully, but the “Berkut” officers kicked and beat protesters with rubber truncheons and their fists without paying any consideration to their age, gender or physical condition.

Nobody was committing any offence meaning that the circumstances cannot be seen to have warranted the use of force. The group of people could not be called organized and accustomed to showing resistance through force or attack. “The use of force was aimed at hurting and harming peaceful protestors, not protecting public security or even protecting the right to peaceful assembly, in violation of international law and standards,” says Pyvovarov.

No warning before use of force

As a basic principle, there must be an audible warning by agents of the State before they use force. Demonstrators should be given the time and opportunity to understand the situation and obey police orders. Force may only be applied without warning where there is a direct threat to the life or health of members of the public or police officers, and “where force is absolutely necessary, no one should be subject to excessive or indiscriminate use of force,” as stated by the United Nations Human Rights Council in its resolution 19/35 (paragraph 6)

There was no such threat on 30 November 2013 in the streets of Kiev and police did not ensure that its force was not excessive and aimed at beating protestors.

UMDPL also notes that the number of journalists who suffered from this violence – over 50 people – was unprecedented in all the years of Ukraine’s independence.

You can read more from the analysis here.

Members and partners of the Human Rights House Network (HRHN) condemned in the strongest terms the excessive use of force by Ukrainian authorities to disperse peaceful demonstrations, following the refusal by Ukraine to sign the European Union association agreement, in their joint letter of 3 December 2013 to President Viktor Yanukovych.