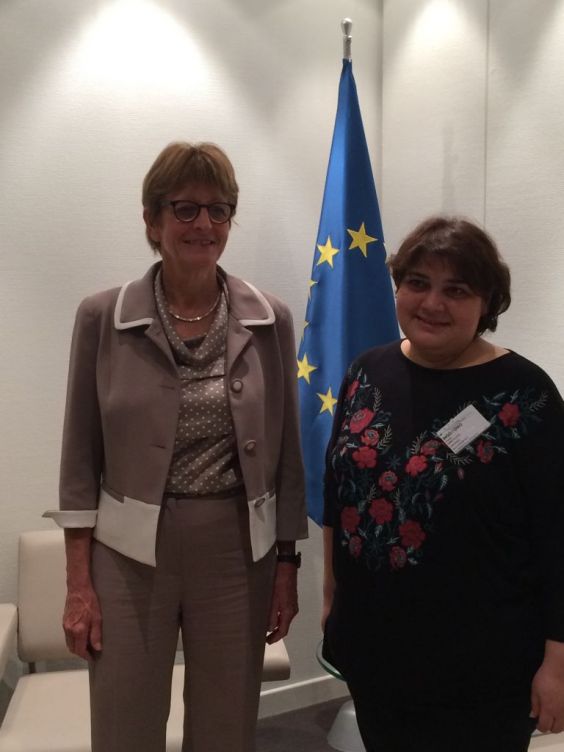 The Azerbaijani authorities should immediately lift the travel ban imposed on Khadija Ismayilova, leading investigative journalist in the country, and cease all legal proceedings against her. Against the backdrop of the unprecedented crackdown on civil society, Khadija Ismayilova’s arrest on criminal defamation charges seems imminent and would confirm the authorities’ intent to silence all critical voices in the country.

As part of the International Partnership Group on Azerbaijan (IPGA), APC, Article 19, the Committee to Protect Journalists, Index on Censorship, the European Federation of Journalists, Freedom House,  Freedom Now, the Human Rights House Foundation, International Media Support, the Media Diversity Institute, PEN International and Reporters without Borders, call on the international community, and in particular Council of Europe member states to immediately and publicly condemn the ongoing harassment and politically motivated criminal charges against Khadija Ismayilova. With the next court hearing taking place on Friday 17 October 2014, at 11:30 in Binagadi district court in Baku, Council of Europe member states should publicly request to attend and send a representative to monitor the hearing. Khadija Ismayilova and Anne Brasseur, President of the Parliamentary Assembly of the Council of Europe (PACE), meeting in Strasbourg on 29 September 2014.

The NGOs believe that Khadija Ismayilova’s attendance at the most recent session of the Parliamentary Assembly of the Council of Europe (PACE) in Strasbourg triggered the latest string of harassment, including a five hour search upon arrival at the airport following her trip, the criminal defamation charges and the imposition of a travel ban.

“Those who raise concern about the existence of political prisoners in Azerbaijan at the Council of Europe are themselves specifically targeted by the authorities, and such reprisals are incompatible with international human rights standards the Azerbaijani authorities claim to adhere to” said David Diaz-Jogeix, Director of Programmes of Article 19.

“The ongoing harassment of one of Azerbaijan’s most outspoken critics follows an unprecedented wave of arrests of human rights defenders, civic activists and journalists in Azerbaijan who have dared to publicly criticise the authorities. Those who have spoken about the issue of political prisoners in Azerbaijan at PACE have been particularly targeted” said Florian Irminger, Head of Advocacy and Geneva Office at the Human Rights House Foundation (HRHF).

“We are deeply concerned by the increasing persecution of human rights defenders in Azerbaijan and, in particular, continued attempts to stifle free expression through intimidation and harassment of journalists like Khadija Ismayilova and Arzu Geybulla. The international community – and especially the Council of Europe of which Azerbaijan is part – needs to speak out loudly and firmly against the crackdown in Azerbaijan” stated Jodie Ginsberg, CEO of Index on Censorship.

“Khadija Ismayilova is one of the most recognized investigation journalists in Azerbaijan. Harassing her is sending a clear signal of intimidation to the entire media profession” Reporters Without Borders deputy programme director Virginie Dangles said.

The NGOs call on the Azerbaijani authorities to cease its harassment of Khadija Ismayilova and stop the silencing of its critics through imprisonment and politically motivated legal actions. Member states of the Council of Europe, the main human rights institution in Europe, need to speak up and hold Azerbaijan to account for failing to implement its human rights obligations. With Azerbaijan as chair of its Committee of Ministers until 14 November, the integrity and accountability of the institution is at stake. Khadija Ismayilova, Azerbaijani investigative journalist, participated to the side-event at the Parliamentary Assembly on Thursday, 2 October, as well well as other events.

Already upon her arrival at the Baku airport, she was excessively searched and obstructed at the airport. Customs control requested her to access her informatic material, especially her memory card.

Warning of such acts at the side-event, Florian Irminger said “reprisal against Azerbaijani human rights defenders has become a tradition, after ordering the Human Rights House Azerbaijan to cease all activities, arresting human rights defenders in January 2013, arresting Anar Mammadli, and the wave of repression following the June 2014 advocacy in Strasbourg.” Khadija Ismayilova is hence only one further illustration. ”Reprisal against those cooperating with the Council of Europe, such as lawyer Intigam Aliyev who represents so many clients at the European Court of Human Rights, is also an insult to the institution itself” he added.

In this regard, the Committee of Ministers requested to receive more information about the criminal charges pending against Intigam Aliyev, representative in several cases judged by the European Court and currently pending at the Court.