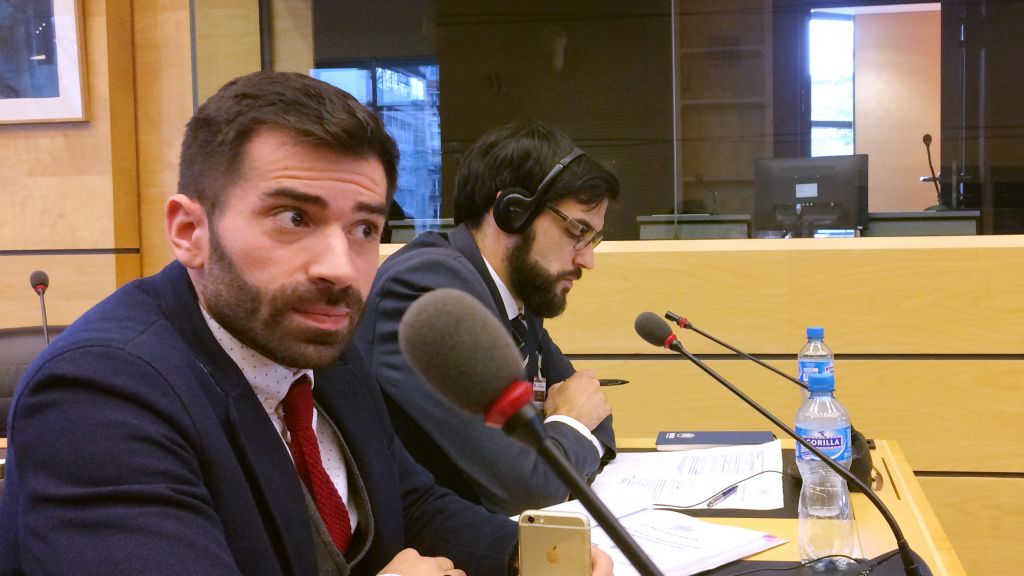 “There is a shrinking space for the debate about human rights and fundamental freedoms in Serbian society. Also, there is less and less public scrutiny of the Government that has a negative effect on the human rights situation in Serbia.”

Danilo Ćurčić from the Lawyers’ Committee for Human Rights (YUCOM), oulined these trends and warned that they threaten to undermine the positive steps Serbia has taken so far in meeting its human rights commitments.

He was speaking at the opening of the United Nations Human Rights Committee review of Serbia on 7-8 March, where he was joined by Petar Žmak from Civic Initiatives, together representing Human Rights House Belgrade.

Danilo Ćurčić presents the session and the key topics discussed.

Danilo Ćurčić highlighted freedom of expression, independence of journalists and media, independence of the judiciary, the current refugee crisis, and Roma rights as the key human rights issues in Serbia.

Sharing his skepticism toward certain answers given by the State delegation to their questions, he said that he expects strong recommendations from the Committee at the end of the session, in particular with regard to the vilification of media and journalists accused of working against the State of Serbia, and to the attacks against national human rights institutions.

He added that the State delegation should explain what measures it has taken and what further measures it foresees taking, to ensure that “smear campaigns, insults, verbal and physical attacks against journalists and media workers are promptly investigated.”

The UN Human Rights Committee meets in Geneva and holds three sessions per year. All State parties have the obligation to submit regular reports to the Committee on how the International Covenant on Civil and Political Rights (ICCPR) is being implemented. Serbia ratified the ICCPR in 2001.

Human Rights House Belgrade, in its report submitted to the UN Human Rights Committee, stated that this review is taking place in a “tense political climate in Serbia, and after years of continued deterioration of the right to freedom of expression, in particular media rights, and restrictions to the possibility to participate in public life in general.”

The report highlights “a growing trend of the vilification of investigative media and journalists where they are being represented as the ones working for the opposition or against the Government.” It warns that several examples of prominent political figures publicly attacking the most critical media, as well as intimidations of journalists, are having a “chilling effect on the media sphere.”

The review takes place at a key moment for Serbia, less than a month before the Presidential election that will be held on 2 April.

Joint NGO report on the human rights situation in Serbia

Human Rights House Belgrade, with HRHF, submitted a joint NGO report in March 2017 to the UN Human Rights Committee on the key elements of the human rights situation in Serbia.