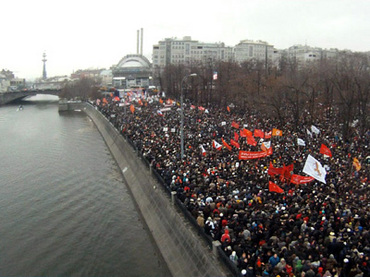 This week both houses of the Russian parliament passed and Russia’s president signed a legislative amendment that dramatically increases fines for people found guilty of participating in unsanctioned rallies. This amendment seriously threatens the right to freedom of assembly in Russia.

The fines, along with other draconian changes to the laws governing demonstrations, protests, and rallies in Russia, were approved in quick succession by Russia’s lower (State Duma) and upper (Federation Council) houses of parliament and finally signed by President Vladimir Putin on 8 June 2012, reports US-based organisation Freedom House. (from $9.15 to $9,150) and allow imposing high fines regardless of whether or not the demonstration actually caused any disturbance or harm.

Moreover, the changes allow for heavy fines against event organisers if the number of participants in a demonstration exceeds what was indicated ahead of time, and prohibit organisers found to have violated the rules during past events from organising future events.

President Putin dismissed the concerns of numerous Russian and international human rights groups and informed that the new law was to protect Russian nationals from radicalism. He said that the law imposed no more restrictions on freedom of assembly than is permitted under prevailing European norms.

This view is shared by other free speech and human rights organisations.

“It is telling that the authorities’ response to the recent groundswell of public outrage over Russia’s disappointing democratic development over the past decade is to crack down further on political dissent”, said Susan Corke, director of Eurasia programs at Freedom House.

“Clearly, they have failed to receive the message expressed repeatedly over the past six months in demonstrations across Russia. Russian citizens are no longer satisfied with the denial of their fundamental right to peacefully speak their minds on the street”, she added.

Signed ahead of mass protests
According to the new bill, the fines for violating the rules on public demonstrations are equal to fines for serious criminal offenses like falsifying elections. The changes were rushed through, despite nearly unanimous condemnation from all sectors of civil society, and, according to reports, in part as an attempt to put a stop to a mass opposition d This provision is apparently aimed at preventing civil society activists

from organising events similar to the May 13 “writers’ stroll”, right. The walk attracted thousands of participants, who refrained from chanting slogans or carrying posters so that the march would not be considered a rally. The new rules could also punish people for exhibiting an opposition mindset.

“If several people wearing white ribbons – the recognised symbol of the protest movement – happen to be together, walking, standing, or sitting in a public area, they could be detained by police and fined”, Williamson stated.

By rushing through the adoption of these amendments, the Russian parliament ignored both critical evaluation of the draft law by Russia’s presidential Human Rights Council and appeals by Russian and international human rights organisations.

“President Putin’s rush to have this new piece of legislation adopted at the start of his presidency demonstrates disregard both for freedom of assembly and Russian civil society”, pinpointed Williamson.

The right to freedom of assembly has increasingly been under attack in Russia. Police frequently disperse – sometimes using unnecessary or excessive force – peaceful public rallies by civil society activists and the political opposition. Imposing large fines for violating rules on public events will have a chilling effect on peaceful assembly in Russia, concludes Human Rights Watch.

The official procedure for organising a public rally only requires notification of the local authorities, including the site and estimated number of participants. However, in practice the authorities often refuse to permit protests, using various formal pretexts and directing organisers to accept alternative locations out of the public eye.

This practice pushes organisers to hold unauthorised demonstrations and to face detention and administrative punishments for violating the rules or for not complying with police orders.

Amendments contradict constitution and international obligations
The amendments violate Russia’s obligations to respect fundamental human rights enshrined in Russia’s constitution, the European Convention on Human Rights, and the International Covenant on Civil and Political Rights, as well as its commitments as part of the Organization for Security and Co-operation in Europe (OSCE).

The European Court of Human Rights (ECHR) has repeatedly ruled that, given the importance of the right to participate in public assemblies to fundamental human rights, governments must give wide latitude to participants and organisers of demonstrations to publicly assemble peacefully.

ECHR: freedom of assembly – fundamental human right
The ECHR has made clear that the freedom to take part in a peaceful assembly is of such importance that a person cannot be subjected to a sanction – even one at the lower end of the scale of disciplinary penalties – for participation in a demonstration that has not been prohibited, so long as this person does not commit any reprehensible act on such an occasion.

The court has also emphasised that an unlawful situation does not justify an infringement of freedom of assembly. The court said that in instances in which demonstrators do not engage in acts of violence, it is important for the public authorities to show tolerance toward peaceful gatherings if freedom of assembly is not to be deprived of all substance.

Russian authorities aim to control independent media ahead of election?